Living Off-the-Grid: How One Couple’s Dream of Creating a “Floating Cottage” Turned Into a Business 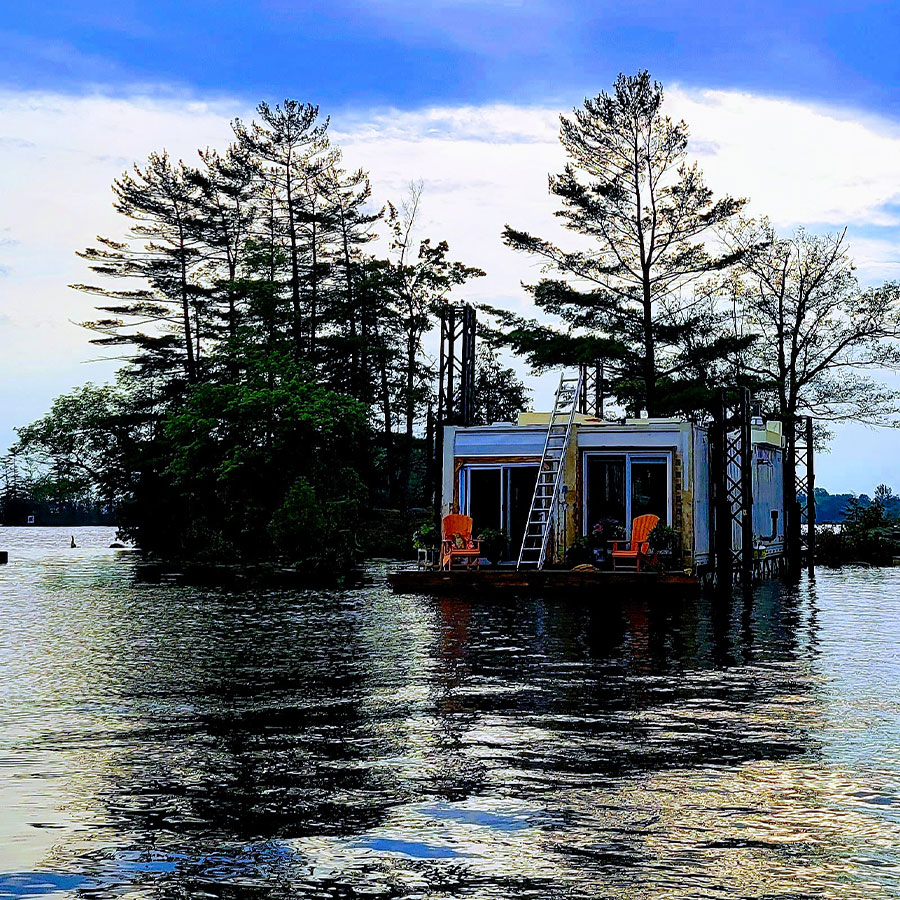 The dream was to live year-round on the water in a spacious four-season floating cottage untethered to the land, travelling the waves whenever the whim and winds beckoned. Photo Courtesy of Live Outside The Box

Some people dream about castles in the air.

Joe Nimens dreamt about a cottage on the water.

His dream was to live year-round on the water in a spacious four-season floating cottage untethered to the land, travelling the waves wherever and whenever the whim and winds beckoned.

On Labour Day 2020, after selling their homes in Coldwater and Orillia, Ont., Joe, who at the time was 49, and his partner Erin Morano, then 59, set out to build their dream.

Now, a short ramp over the water leads from the shore to a charming shabby chic, Muskoka-style, fully outfitted cottage that can float to islands in Georgian Bay or all the way to Toronto.

In the meantime, it was docked at Severn Marina, where Erin has decorated the large attached floating patio with pots of colourful flowers and herbs alongside the barbecue and deck chairs.

The cottage started as massive shipping containers measuring 53 ft. long by 8 1/2 ft. wide by 9 1/2 ft. tall. They were sourced on Kijiji from a container broker in Bolton, Ont., and delivered to a vacant area on the shore near the boat launch of Severn Marina in Port Severn, Ont.

Even though Joe had worked on building cottages, barges and docks for decades, he was unsure about how to achieve the results he wanted. With no prototype or instructions to guide him — his research failed to turn up the structure he envisioned –- he had to rely on his mechanical engineering training and resourcefulness, and figure things out for himself every step of the way.

“For every bit of steel, nut and bolt and wood, I’ve done the analysis,” he says, “how thick the installation should be, the strength of the window frames and what it takes to hold the roof up if you put glass on one side.”

He adds, “I wanted to find a way to build it in the most indestructible way possible so if everything goes wrong, there’s still no water in the living room.”

The first thing to figure out was how to float the cottage.

“We thought about building a standard steel barge and a house on top of that,” he says. “We considered every imaginable flotation method, from thousands of two-liter pop bottles to plastic or steel barrels to foam filled things. There are a million ways to make things float — and we thought about all of them.”

The challenge was to float two conjoined shipping containers and their household contents, a total of about 30,000 lb.

He explains that on the west coast, logs bundled together provide enough flotation to build a house on top, but that method is expensive and floats too deeply in the water.

“What we wanted to achieve was less than a foot of draft so we could easily bring it close to shorelines and step on and off with a short ramp.”

The solution was to build floating platforms layered with expanded polystyrene, similar to the Styrofoam used in coolers. “We used R70 on and under the floor and R35 on the walls,” Joe explains. “The floor blocks are 4 in. by 8 in. by 1 in. thick, and the ones on the walls are half that.”

The couple were also determined that their floating cottage would be able to pass through the 45 locks of the Trent-Severn Waterway, which connects Georgian Bay to Lake Ontario.

The locks are 22 ft. wide and so they ended up building two separate floating structures. One double container structure measuring 17 ft. wide is the house and the other identical structure is the workshop where the tools and firewood are stored.

Yes, the floating cottage has a wood stove, a propane stove, a refrigerator with freezer, a king-size bed, a shower, a winterized water line and a toilet that incinerates its contents. “There’s no sewage septic tank so no possibility of cracking or breaking,” says Joe. The toilet was the third-highest expense after the shipping containers and the cost of insulation and flotation materials. The cottage is completely self-sufficient and functional off the grid, with a back-up generator.

At the beginning of August, the couple floated their cottage and workshop barge to Little Lake. “We are completely off the grid,” Joe reported, “and still working on our solar system which is taking on increasing loads as we learn to trust it more and more each day.” He’s still working on windows and wood facia for the barge structure.

“And then,” he adds, “maybe we’ll start work on a rooftop patio with stairs for access and railings all around.”

A Home for all Seasons

But what about the winter? On the water? That’s one of the first questions the couple is asked when people come by to see their unique dwelling.

No problem, says Joe. He’s used the same spuds that raise oil rigs above the water to pull the cottage up.

There’s a 40 hp. motor that moves the structure at a rate of four or five miles per hour. “It works great but we’d never move it on a windy day,” he says.

Joe’s biggest challenge, besides figuring out how to float it, was the plumbing and heating.

He says he worked 40 hr./week since the beginning of October with part-time help of about 20 hr./week. Just moving the cottage onto the water took about 60 hours of work even though it was built near the shoreline.

“There was about 40 ft. between the front door and the lake and the whole process took about a week. We had to build our own marine railway that would move 10 ft. at a time and we had to do it 15 times to get the whole thing out on the water.”

He’s spending the last few weeks of summer replacing one side of the containers with a wall-to-wall-to-ceiling window and installing siding on the rest of it.

And then, he’ll be ready … to build another one.

Turning a Passion Into a Business

So many people have expressed interest in having a floating cottage like his that he’s planning to launch a business building them.

“People think it’s the coolest thing ever,” he says. “They’re fascinated by the idea of it, that it’s possible, that it’s livable year-round and can float in only 6 in. of water. It blows people’s minds.”

In the meantime, if you’re in Port Severn or out on the bay or on one of the lakes connected to the Trent-Severn Waterway and you see a large cottage floating serenely on the water, be sure to wave to Joe and Erin.