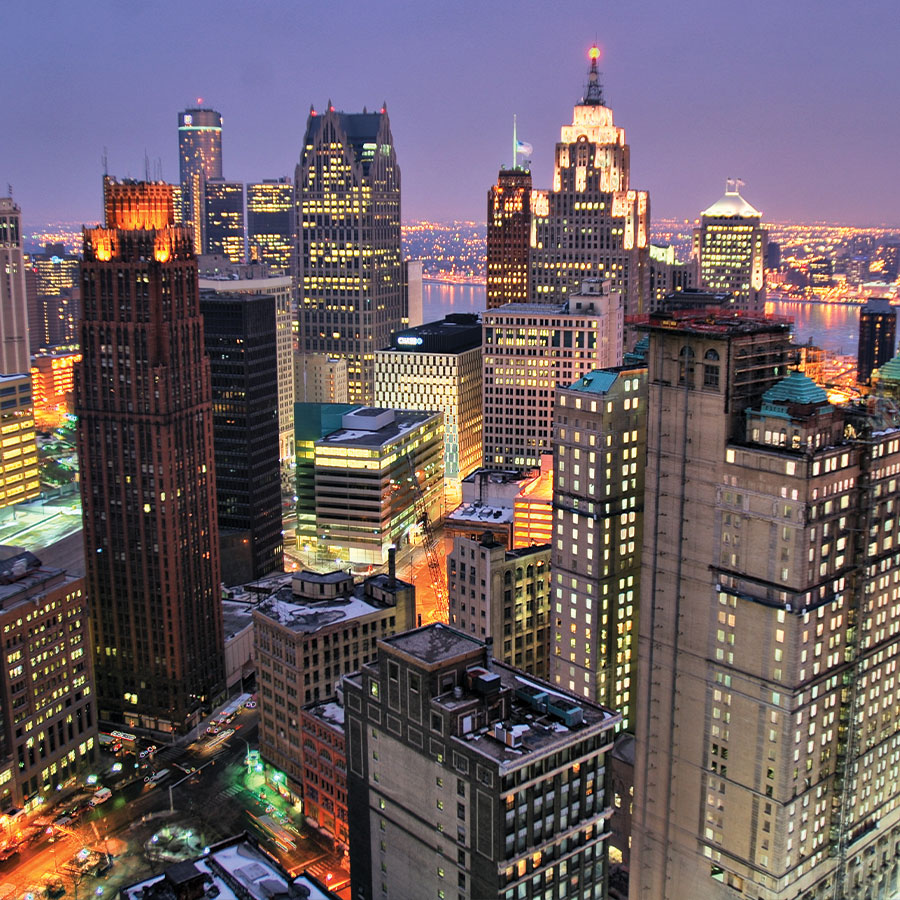 Given that it’s nickname is Motor City, you’d be forgiven for being surprised to find downtown Detroit is eminently pedestrian friendly. Not only that, the core is brimming with excitement these days — Time magazine declared the city one of the world’s 50 greatest places to visit for 2022. The recently-declining metropolis is striving to regain greatness, as the oft-repeated slogan “rising from the ashes” clearly communicates.

Detroit has struggled in recent decades — politically, economically, racially — and the city makes no attempt to obfuscate its past. In fact, it celebrates its heritage, confronting the good and the bad in bold, in honest and artful ways — you’ll see this in alleyway murals, art installations, signage and plaques, all telling the story of Detroit as it was … and will be. This is a great time to visit Detroit. It’s been 15 years since my last visit and I found a city teeming with enthusiasm and excitement. I’ve already recommended it to my friends as a perfect getaway or stop on a road trip south.

Locals grab and dash breakfast from Iggy’s Eggies — order at the window and take your sandwich to go. Expect a line on weekends, but it moves fast. For all-day and all-night snack options, AmericanConey Island is a Detroit institution. The classic “loaded” chili dog is about as good as can be. Solid American classics — dry-aged steaks, grilled scallops, beef tartare and oysters on the half shell — attract the expense-account set to Highlands Detroit at the top of the General Motors Renaissance Center. The view of the river and the city can’t be beat — with a cocktail in hand, this is a great first stop in order for an aerial view of the cityscape. Hop a taxi to nearby Corktown for dinner at Takoi, a convivial pan-Asian restaurant with an irresistible menu that over delivers on lively flavours. Think: Tom yum fried rice, spicy coconut green curry and — a standout — Khao Siu, which is egg noodles with coconut milk curry broth, stewed chicken, lime and pickled mustard greens.

The Charles H. Wright Museum of African American History offers permanent and rotating exhibits that narrate the African American experience — Detroit has the largest population of Black people in the U.S. — from ancient history to the present day. A visit to Detroit demands a session at Hitsville U.S.A. — a.k.a. the Motown Museum — where a guided tour takes you into the inner sanctum where all the music magic happened. Detroit has many spectacular theatres and venues and one of the prettiest is the Fisher Theatre, built in the 1920s. Today it hosts top acts and Broadway shows. The Henry Ford Museum of American Innovation is a must-see — it’s a remarkable celebration of human achievement, with exhibits covering everything from mathematical inquiry to the need for speed (this is Motor City, after all). Exhibits detailing the continuing struggle for human rights demand attention — a display that includes the bus Rosa Parks rode on is particularly striking. You can board the bus, take her seat and relive her experience — and ask yourself “Could I be that brave?”. Don’t forget to just wander the downtown at the base of Woodward Avenue and take in a stroll along the river — yes, that’s Windsor just across the river (and, just to add to your confusion, you’re looking south toward Canada). Yes, maps are handy.

You could say you stayed at the Siren Hotel for its intense and irresistible boutiquey-ness. Or you could just straight out admit that it’s the intimate Candy Bar, just off the lobby, that makes this the place to be, with its velvet boudoir-chic decor, disco ball and seasoned mixologists. The Shinola Hotel has a very high-quality turntable in the lounge — a lounge so well appointed with art books, visual treats and comfortable seating that you may prefer to stay here for the night. Though, the rooms are even nicer.

Road Trip: A Fond Farewell to the Old-Fashioned Map

Flight Cancellations Are Falling After Months of Airport Chaos: Canada’s Minister of Transport