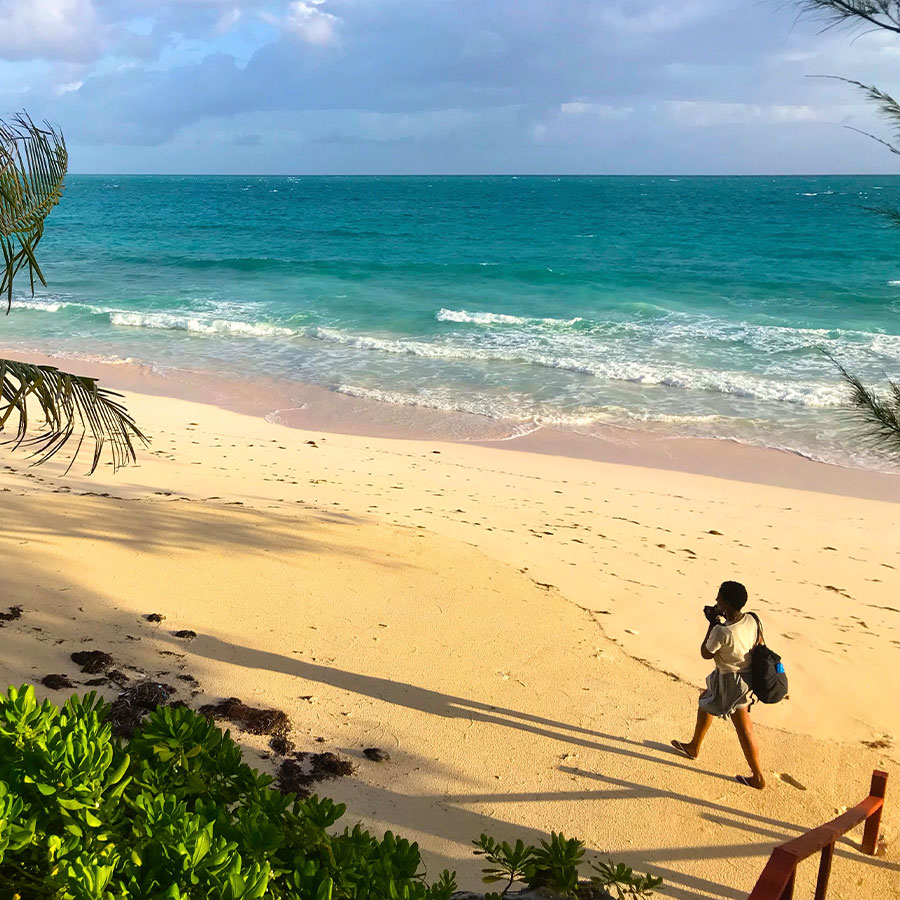 A short flight from bustling Nassau is the long, skinny island of Eluthera which stretches for 110 miles and has just 11,000 residents. Photo: Courtesy of Jim Byers

After these long months of pandemic restrictions, are you ready to pack your bags and head to a far-flung destination? To inspire your travel planning, we look at some idyllic tropical getaways that are a little off the proverbial beaten path.

The second half of the country known as St. Vincent and the Grenadines is a sheer delight. On the island of Bequia, which is just a short ferry ride from St. Vincent, you’ll find a sleepy waterfront village called Port Elizabeth. It’s got a wonderful, laid-back vibe and small, narrow streets packed with fresh fruit stands and, ramshackle shops and restaurants with names like De Bistro, which has a hand-painted sign reading New York, London, Paris, Bequia. Take the waterfront walking path past a series of small bars to pretty Princess Margaret Beach. The Bequia Beach Club is one of the island’s top hotels. Mayreau is another island in the chain and features one of the world’s most beautiful beaches, in Salt Whistle Bay. Mustique attracts wealthy vacationers such as Mick Jagger, Bryan Adams and, Prince William and family, doncha know.

Nevis is technically a part of St Kitts, but offers a more relaxed, low-key approach. Take a tour of the home where former U.S. secretary of state Alexander Hamilton — now the posthumous star of Broadway’s biggest show— was born, or try a tricky, sweat-soaked climb up the jungle-clad slopes of Mount Nevis. Afterwards, retire to the legendary Sunshine’s Bar for a snack and the oh-so-powerful drink known as the Killer Bee. It’s so popular even the local monkeys have been known to steal a sip. Or three. Wayne Gretzky and other celebs have been known to pop in. Nisbet Plantation is a resort on the windier, Atlantic side, with a decent beach and lovely units spread out over acres of deep green grass. On the Caribbean side, you’ll find the posh Four Seasons, with a series of gorgeous pools and a magnificent beach that marches on just shy of forever.

A short flight from bustling Nassau is this long, skinny island which stretches for 110 miles and has just 11,000 residents. In other words, there’s a little more room to spread out than you might around the pool at Paradise Island in Nassau. One of the natural wonders of the island is something called Glass Window Bridge, where the island narrows to just a few feet wide and where there’s a large gap under the road; an open outlet that connects the smashing, angry Atlantic on one side and, on the other, the smooth, silky waters of the Caribbean (actually it’s called the Bight of Eleuthera since we’re north of the Caribbean). It’s quite something. There’s no beach, but French Leave is a lovely Marriott Autograph Collection property on the south end of the island. Long Island has even fewer residents and might be the ultimate Bahamian getaway.

This is the most mountainous island in the Caribbean, with tremendous hiking trails, towering waterfalls and thick jungles. Trafalgar Falls is a popular waterfall in the mountains that thunders down from on high. Nearby you’ll find a natural hot spring that’s great for soothing tired bones. Emerald Pool is a gorgeous, shady place to take a dip in cool water on a hot day. At the far southern end of the island, take the short, easy hike to the top of Scotts Head for truly inspiring views of the Caribbean and the island’s jagged mountain tops. The new-ish Jungle Bay offers stunning suites near Scotts Head. There’s also the posh Kempinski on the north end of the island, which has several nice beaches.

This is a remarkable island that’s just a short ferry ride from the casinos and posh hotels of St. Thomas in the U.S. Virgin Islands. Trunk Bay is one of the most beautiful beaches in the Caribbean, with brilliant blue water and pure, white sand. There’s a cool underwater snorkelling trail you can follow. If it’s crowded, try nearby Cinnamon Bay or Maho Bay. Two-thirds of the island is U.S. national parkland, thanks to the generous donations of the Rockefeller family. Bordeaux Mountain lookout has a funky café with beautiful views of the island and of Tortola and Jost Van Dyke in the British Virgin Islands. The Westin St. John Resort Villas is a great option near the marina in trendy Cruz Bay.

A version of this story was originally published on Sept. 5, 2021