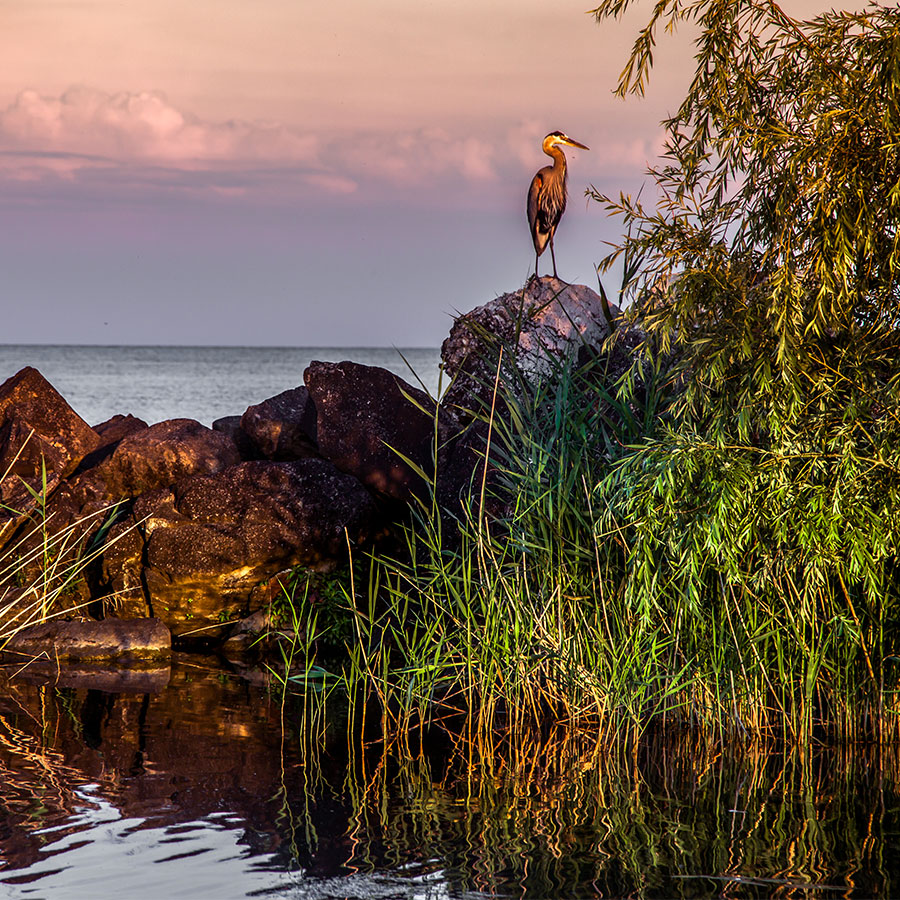 Dubbed as one of Canada’s Rivieras, a staycation along Lake Erie is one to remember, and return to throughout the year. Photo: Steven Kriemadis/Getty Images

With a latitude of roughly 42 degrees — in line with the island of Corsica, northern California, and Rome — Ontario’s side of Lake Erie offers more than 400 km worth of endless expanse of bountiful, scented, even delicious experiences to enjoy. Derived from Erielhonan, the Iroquois word for ‘long tail’, Lake Erie is the warmest of all the Great Lakes, while the region’s temperate climate makes it a fertile playground for vineyards to thrive, wildlife to flourish, and vacationers to frolic. Dubbed as one of Canada’s Rivieras, a staycation along Lake Erie is one to remember, and return to throughout the year.

Located on the western edge of Lake Erie, at the mouth of the Detroit River, Amherstburg is small town Canadian charm at its best, complete with French-style century homes, and shops to indulge both your sweet tooth and coffee cravings all while enjoying the legendary sunsets. But here, the town’s enriching history is still among its main attractions, and thankfully, it’s on full display at every turn, and best explored on foot.

Along with the Amherstburg Freedom Museum, and Navy Yard National Historic Site, Fort Malden is also a must-visit. Built in the 18th century, this too is a National Historic Site which played not only an important role during the War of 1812 as an overlook and garrison, but also provided an entry point and refuge for African-American slaves via the Underground Railroad.

Further east along the coast, Point Pelee National Park attracts thousands each year thanks to its beautiful beaches and the thrill that comes with being at the country’s southernmost mainland point. Pelee Island is a short ferry ride, and a lovely spot just offshore but if you prefer to relax and imbibe in style, take your pick from several remarkable wineries near Kingsville and Leamington who take advantage of a long growing season and an abundance of sunshine.

One of Ontario’s first wineries, Colio Estate was founded by three Italian bricklayers in 1980 and offers a rustic, old-world vibe, while Colchester Ridge is one of the newer kids on the route and is open year-round for tastings and picnics. At Dancing Swallows, enjoy a relaxing glass of vino outside, surrounded by 100-year-old maple trees, while at Paglione, an Italian villa-style experience awaits with wine, wood-fired pizza and handmade gelato. Of course, Pelee Island’s award-winning, authentic wine history dates back more than 150 years, offering everything from Cab Sauv to Cab Franc.

A Day at the Beach and Classic Eats

With water temperatures hovering in the low-to-mid-20s during the summer, heading to the beach is a no-brainer. Located near Fort Erie, Crystal Beach was once home to an amusement park that operated for 101 years (1888-1989). The park may be gone but the beach still remains popular for its crystal clear waters and a pristine, white sandy beach.

In Port Stanley, spend a few hours soaking up the sun on the long and spacious sandy beach, and après–sun, get a bite at Mackie’s, a beachside diner that’s been famous for fries, ketchup and an Orangeade milkshake for over a century!

Affectionately known as the ‘Jewel of Erie’s North Shore’, Port Burwell Provincial Park features two marinas and a Blue Flag beach, while Port Dover’s palm tree-lined sandy oasis offers a perfect, family-friendly day on the water. For grub, make sure you hit The Arbor, a century-old takeout spot, famous for its foot-long Red Hots. If you’re in the mood for traditional fish and chips, Knechtel’s on the Beach has been a go-to for decades, while Erie Beach has been preparing delicious Lake Erie perch and pickerel for over 70 years.

For those who prefer to stay dry while experiencing the beauty and awe of nature, Erie’s coast has several ideal locations to catch the annual bird migration, including the aforementioned, and internationally recognized Point Pelee National Park. Visitors in the spring and fall are greeted with a glorious migration of nearly 400 bird species. Communities along the coast even host festivals to celebrate the bi-annual force of nature, which includes of course the monarch butterfly migration in autumn.

Did you know that there’s a 40-km sand spit that stretches into Lake Erie? It’s home to Long Point Provincial Park, the Long Point Bird Observatory, and the Long Point National Wildlife Area. This biosphere reserve is an extensive stopover point for thousands of birds, including tundra swan and bald eagles. With a camera and binoculars in hand, hop on a trail, look around, and explore from as many as 40 birding sites.

With golden rays, soothing warm water and scents of grape in the air, a staycation on this coast is time exceptionally spent and savoured.

A version of this story was originally published on July 19, 2021