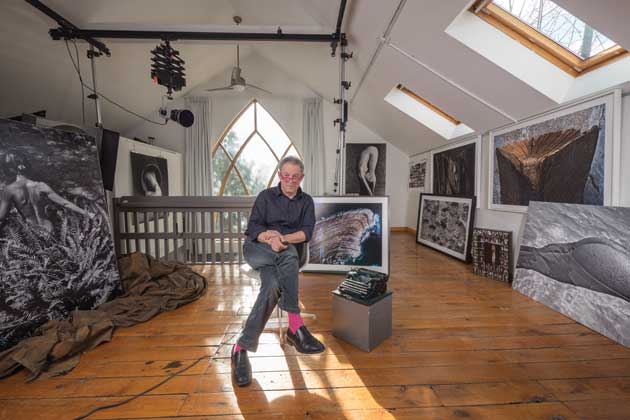 One day as he walked by, there was the sign he always dreamed of seeing: For Sale.

But an acquisition was not in the cards. He and his wife were leaving the very next day for a vacation for a few months in Spain. When they returned, the property was sold.

Almost a year later, he happened to be walking down the street again and noticed the coach house was once again on the market. This time, he closed the deal.

“We didn’t care about the main house in front,” he says, laughing. While he and his wife reside in the house, the 1,400-square foot coach house located behind, is really the gem he loves.

Originally used as a stable, the upper level, which once housed the animals’ hay, still features the original wooden flooring.

Dojc styled this upper level space to make it look like a private gallery to store and display his acclaimed artwork and as a sanctuary to seek inspiration.

ON HIS SPACE (PICTURED ABOVE):

A “I found a set of these chairs in immaculate condition on the side of the road. They look late ’50s. I was worried that my wife would say, ‘No more chairs!’ ”

B  “This typewriter once belonged to my father, a headmaster in eastern Slovakia who used it to write a history book. It’s one of the few things of his I have. Most likely I will pass it on to my son, who is a journalist.”

C  “This was my final project in my graduation year at photography school at Ryerson University in 1974. It was selected to be in one of the first photo exhibits that featured contemporary photographers at the AGO.”