Good News: The Silver Lining in the COVID-19 Pandemic Should Ease Fear and Anxiety 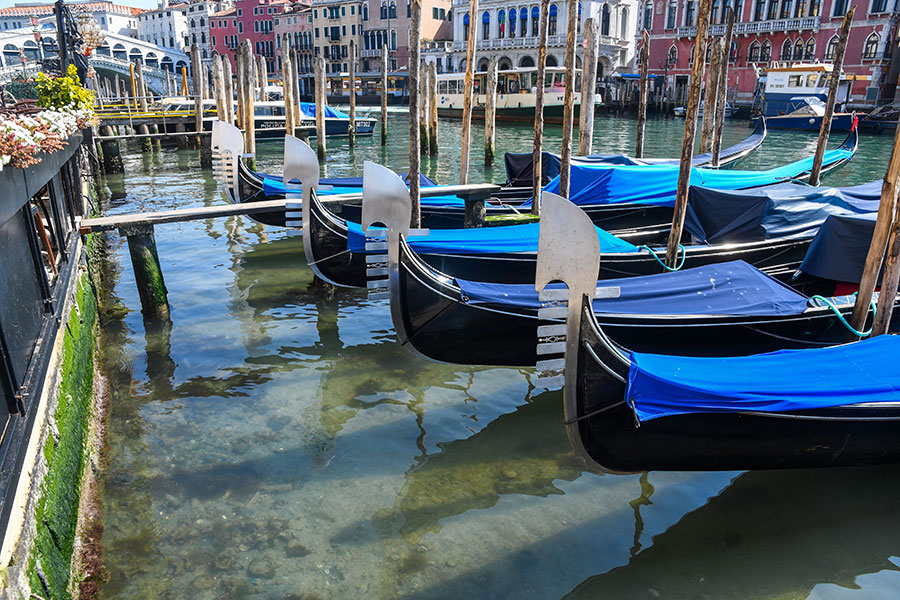 Venice’s murky Grand Canal, usually choked with motorboat traffic, is clearing up in the wake of Italy’s COVID-19 lockdown, with seabirds enjoying calm waters; even the bottom is visible next to gondolas docked near the famed Rialto Bridge. Photo: Andrea Pattaro/AFP/Getty Images

It’s easy to get mired in anxiety and stress over the COVID-19 pandemic. But there’s one thing spreading even faster, and that’s the kindness, generosity and support of people in communities across Canada and around the world who are stepping up to help people in need.

So take a break from all the COVID-19 reports and focus instead on the hope, charity and good news stories coming out of the pandemic.

1. Canadians across the country are starting up Facebook groups to help those in their own communities during the COVID-19 pandemic, offering everything from support and advice to pickup and delivery of supplies to those who can’t get out themselves. For example, the Caremongering – P.E.I.: Response to COVID-19 group, which serves Prince Edward Island, features posts from residents offering tips on where to buy certain items, financial advice and even soliciting ideas on how to celebrate the kind locals who’ve gone out of their way to deliver food and supplies within the community.

In fact, Canada’s “caremongering” trend has caught on, as dozens and dozens of Facebook groups pop up around the country in various cities offering support to vulnerable citizens.

2. While COVID-19 testing in Canada certainly isn’t as widespread as many would like it to be, it turns out Canada is still one of the top-performing countries in the world. “Canada is screening for the novel coronavirus more widely than many countries in the world, and at a far greater rate per capita than in United States,” the National Post noted earlier this week.

Canadian Medical Association president Dr. Gigi Osler told the paper, “What I’ve seen over last few days is a much more co-ordinated response than last week or two weeks ago,” while Politico talked to Jason Kindrachuk, a Canada Research Chair in emerging viruses and University of Manitoba assistant professor, who noted that Canada is “actually doing a really good job” despite resources.

3. Spirit of York, a Toronto-based distillery, is taking a page from other alcohol makers around the world and pivoting from producing gin and vodka to making hand sanitizer. The alcohol-based sanitizer is being made to World Health Organization specifications and is sold for $3 a bottle or given away for free to those who can’t afford to pay. And in Beamsville, Ont., Dillon’s Distillery has spent the last week making alcohol-based hand sanitizer and disinfectant and, according to Global News, “had distributed more than 3,000 bottles to front-line health-care workers and other essential services by Wednesday afternoon.”

4. Arts and entertainment outlets, meanwhile, are crucial to people’s mental health and well-being during a crisis. And as such, a huge number of operas, symphonies and classic rockers are streaming live or archived concerts for free on their respective websites and social media channels. Virtual museum tours are available as well, not to mention online tours of art galleries as well as new movie releases being made available on demand. Click here for a full roster of virtual arts and entertainment options.

5. One unexpected benefit of human isolation during the COVID-19 outbreak is that levels of pollution have dropped in various cities around the world. That includes in a reduction in air pollution in countries like China as well as Italy, two epicentres of the outbreak.

In fact, in Italy many observers note that Venice’s canals look cleaner than ever, with the bottom visible and seabirds enjoying calm waters ever since a lockdown put motorized boats – and its famed gondolas – out of service. In New York, the BBC reports “carbon monoxide mainly from cars had been reduced by nearly 50 per cent compared with last year.”

6. A happy trend that started at St. Anthony’s Nursing and Rehabilitation Center in the town of Rock Island, Ill., is spreading rapidly. After the institution noted on its Facebook page that many residents are in isolation and can’t receive visitors and appealed to local students stuck at home to write to them, kids in the community started sending homemade cards and letters, and the act of kindness quickly caught on across the country.

In a similar vein, a pair of siblings in Clintonville, Ohio, aged nine and six respectively, put on a front-porch cello concert for their 78-year-old neighbour, who is self-isolating due to COVID-19 fears.

Another trend has seen performers around the world take to their balconies to entertain their fellow condo dwellers in self-isolation. In one viral video, mezzo-soprano singer Julie Nesrallah belts out “O Sole Mio” from her Toronto condo.

As well, owners of a corner store in the town of Stenhousemuir, Scotland, are handing out free face masks and hand sanitizer to anyone over the age of 65.

“I feel it is not fair on elderly people. Some can’t get out the house,” owner Jawad Javed told The Independent. “We are delivering 30 packages to a care home where there are 30 people living, and we’ve got another couple of hundred in the shop.”

7. Famed chef José Andrés, who founded the World Central Kitchens non-profit that provides meals in the wake of natural disasters, closed a number of his restaurants amid the COVID-19 outbreak and is now reopening some in the Washington, D.C., area as community kitchens for those who can’t afford groceries. And, as the Washington Post notes, while some criticized the move in the wake of advice not to gather in groups of more than 10 people, Andrés offered this rebuke.

The restaurants being used as community kitchens have arranged spaces outside where patrons can line up at safe distances around six feet apart.

8. Disneyland, meanwhile, is supposed to be the happiest place on Earth. But while the Anaheim-based theme park’s doors are shuttered during the COVID-19 outbreak, the Disneyland Resort announced it would donate its food inventory to the local Second Harvest food bank.

9. China, meanwhile, is reopening a number of public spaces and tourist attractions as the rate of new COVID-19 cases steadily declines in the country. It’s a positive trend and signal to the rest of the world that the virus can be overcome, and life can return to normal.

10. And BlueDot, a Toronto-based organization that “protects people around the world from infectious diseases with human and artificial intelligence,” according to their website, has partnered with the state of California to assist in their fight against COVID-19. “We’re excited to partner with the State of California to help them in their COVID-19 response,” the company said in a tweet posted on March 15. “Earlier today, Governor Gavin Newsom discussed some of the cutting-edge work BlueDot is doing to help support Californians.”

The Queen and the Royals Keep Calm, Carry On and Face COVID-19 With Aplomb