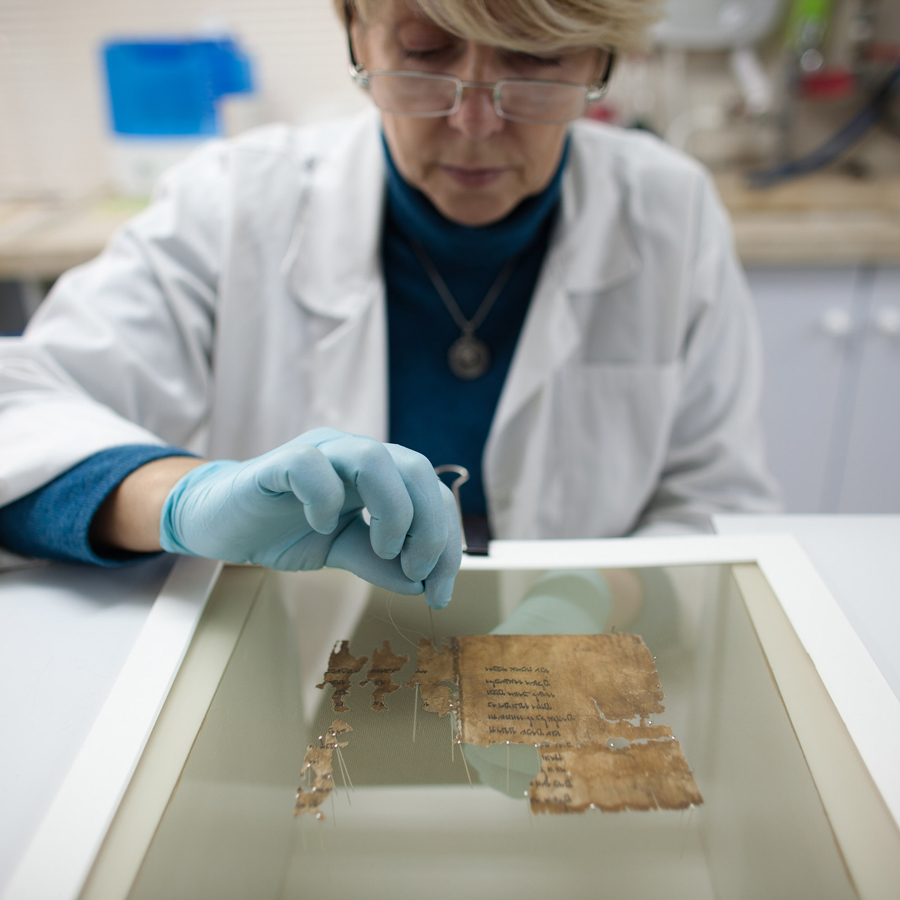 A conservation analyst from the Israeli Antiquities department, above, prepares fragments of the real Dead Sea scrolls at a Jerusalem laboratory before photographing them in 2012. On Sunday, a report revealed that 16 supposed fragments of the Dead Sea Scrolls purchased by the U.S.-based Museum of the Bible were found to be forgeries. Photo: Uriel Sinai/Getty Images

It says it right there in the Ten Commandments: “Thou shalt not bear false witness.” And let’s not forget Leviticus 19:11, which declares, “You shall not steal, nor deal falsely, nor lie to one another.” In fact, the Bible makes it pretty clear throughout that fraud is frowned upon, which makes the news of forgeries of the Dead Sea Scrolls discovered at Washington D.C.’s Museum of the Bible even more unfortunate.

A report by a team from Art Fraud Insights released on Sunday revealed that all 16 of the Dead Sea Scroll fragments that the museum owns are forgeries. This does not impact the authenticity of the real Dead Sea Scrolls.

“After an exhaustive review of all the imaging and scientific analysis results, it is the unanimous conclusion of the Advisory Team that none of the textual fragments in the Museum of the Bible’s Dead Sea Scroll collection are authentic,” Colette Loll, Art Fraud Insights founder and director, wrote in the report’s executive summary. “Moreover, each exhibits characteristics that suggest they are deliberate forgeries created in the 20th century with the intent to mimic authentic Dead Sea Scroll fragments.”

The findings confirm suspicions from some experts, including a Canadian researcher from Trinity Western University in B.C., who have questioned the authenticity of the scroll fragments since 2017 — the same year the museum opened.

The museum was founded by Oklahoma-based billionaire Steve Green, a noted American evangelical and patriarch of the family behind the Hobby Lobby arts and crafts store chain, which has previously found itself at the centre of moral controversy and legal proceedings over the purchase of antiquities that may have been stolen from countries in the Middle East.

Telling the Real Scrolls From the Fakes

The real Dead Sea Scrolls were discovered by shepherds in the Qumran Caves on the West Bank of the Judean Desert around 1946. They are written on parchment, papyrus and bronze and date back to sometime between the last two centuries BC and the first century AD. They contain Jewish texts written around the time of Jesus, including texts of the Hebrew Bible.

When it comes to the forgeries, the Art Fraud Insights team used advanced technology, including infrared spectroscopy and macro X-ray fluorescence imaging among other tools, to determine that “modern writing was applied to small scraps taken from archeological deposits of leather,” which the team believes could include pieces of leather from ancient Roman shoes found at other archeological sites. They also noted inconsistencies in the writing, including the use of modern ink, and a shiny amber coating on the surface of the fragments that the team believed to be animal skin glue.

“One fragment’s lettering squeezed into a corner that wouldn’t have existed when the writing surface was new,” CNN reported. “Another appeared to have a Greek letter alpha where a 1930s reference Hebrew Bible used an alpha to flag a footnote.”

It isn’t known where the forgeries originated, but CNN added that experts believe that the use of some of the same materials in each scrap suggest they originated from the same source.

The Museum of the Bible opened in 2017 and, according to the Art Fraud Insights report, the institution requested testing on five of their Dead Sea Scroll fragments at that time. The report adds that the museum itself acknowledged the “problematic” issues with the scroll fragments at the time and that the results of those first tests, released in 2018, revealed, “The mineral deposits and the writing support material were inconsistent with being authentic” and that the five fragments “exhibited characteristics ‘inconsistent with ancient origins’ and they were removed from view pending further study.”

Following that finding, the museum decided to have all of their scroll fragments tested, beginning in early 2019, leading to these most recent findings. The test results also represent another chapter in the troubled history of the Hobby Lobby craft store chain and the collecting of antiquities.

Hobby Lobby was at the centre of a court case in 2017 that charged the company with purchasing “thousands of ancient artifacts smuggled out of modern-day Iraq via the United Arab Emirates and Israel in 2010 and 2011.” Such artifacts are often sold by the terrorist group ISIS, though no direct connection between Hobby Lobby and ISIS was made. Still, Hobby Lobby agreed to pay $3 million and forfeit the artifacts to the U.S. government.

As a result, Hobby Lobby released a statement claiming ignorance, pointing to their inexperience in the world of antiquity collecting, which “resulted in some regrettable mistakes. The company imprudently relied on dealers and shippers who, in hindsight, did not understand the correct way to document and ship these items.”

Many, however, didn’t accept the explanation, claiming the group preaches Christian values and then participated in “what federal prosecutors said was the smuggling into the U.S. of ancient clay tablets, seals and other Iraqi archeological objects that might have been looted from the war-torn country.”

When it comes to the fraudulent Dead Sea Scrolls, Steve Green, Hobby Lobby head and the museum’s founder, refused to comment on the findings or on how much the scrolls cost. CNN noted, though, “Scholars say that similar, authentic artifacts can fetch millions in the antiquities market” and that evangelicals often pay millions for biblical artifacts.

Healing in the Holy Land

Food, Faith and Family: A Journey to Italy, the Land of Our Grandmothers