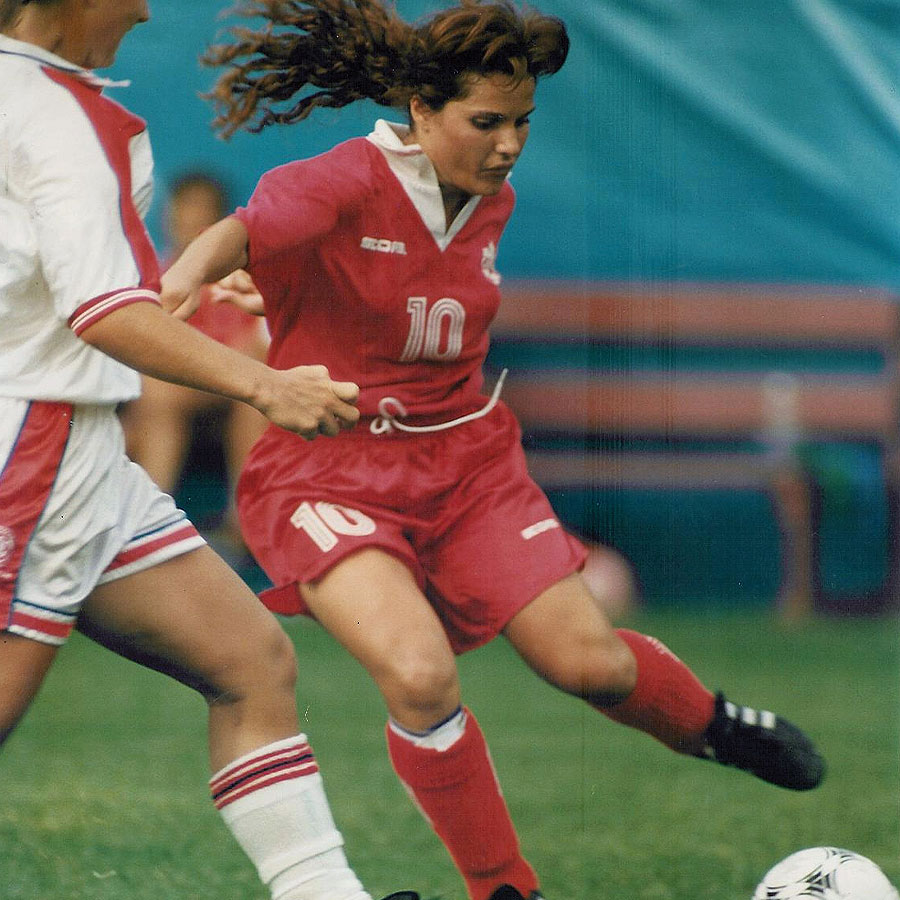 Earlier this week, at the FIFA World Cup in Qatar, the Canadian men’s soccer team was shut out in their first game 1-0 to Belgium. This has led to repeated assertions that Canada — which was blanked in the 1986 World Cup, its only other appearance at the tournament — still has yet to score a goal at the event. Even seasoned sports reporters are repeating the erroneous stat.

In fact, Canada’s men have never scored a goal in the World Cup. But Canada scored its first World Cup goal 27 years ago, and it was a woman who did it. Centre midfielder Helen Stoumbos, of Guelph, Ont., netted the nation’s first tournament goal on June 6, 1995, during the FIFA Women’s World Cup in Sweden, with a beautiful bending corner kick that eluded England’s goalkeeper.

Why this is not widely known or reported — it doesn’t even come up on Google, while Alexa uncovers it after asking with specificity — is a far bigger question regarding sport and gender. (Canadian soccer legend Christine Sinclair, for example, has 10 career World Cup goals, yet the “Canada has never scored in the World Cup” refrain lives on.)

Stoumbos, now 52, was inducted into the Canadian Soccer Hall of Fame in 2008 and went on to a career as both a commentator for women’s soccer and as a TV producer/host. She also co-founded the Canadian Women’s Soccer Alumni Association in 2016.

She still lives in Guelph, where she is CEO and President of the newly launched GO.OD Games (Get Out, Out Do), a multi-sport competition for athletes over the age of 30.

Ahead of Sunday’s Canada vs. Croatia World Cup game, during which, hopefully, the Canadian men’s team will finally score, Zoomer spoke with Stoumbos about the irksome commentary around “Canada’s first World Cup goal,” her experience representing our country almost three decades ago and how she stays in shape today.

KAREN BLISS: With the Canadian men’s soccer team making the FIFA World Cup for the first time since 1986, the country is waiting on our perceived ‘first World Cup goal.’ Having actually scored Canada’s first World Cup goal, how do you feel hearing that over and over?

HELEN STOUMBOS: I just wish they would use the word “men’s” World Cup goal [Laughs]. Anybody that’s been following soccer in Canada for the last how many years would know that the women have played in the World Cup, whether they forget to say it or they just assume we understand that they mean men. But a lot of people probably don’t follow women’s soccer, so maybe they don’t really think about it. But it would be nice if when they referenced the first World Cup goal, it would be the first men’s FIFA World Cup goal.

KB: If your goal had happened today, you would be a household name. How popular was national women’s soccer back in the nineties?

HS: To give you an example of what it was like when we played in the World Cup, I think our games were televised a week after we got home in the middle of the night. I don’t think anybody was really watching or knew that they were on. At the time, you’re playing because you love the sport. You just want to go out there and represent your country playing a World Cup. Back when I scored in ’95, I had absolutely no idea I had scored the first-ever goal for Canada. You didn’t think about it. I think it was six months after I got home that somebody asked me, ‘Hey, do you know who scored Canada’s first-ever World Cup goal?’ And I said, ‘No, who?’ [Laughs]. And they were like, ‘You did?’ I was like, ‘What?’ So there wasn’t a lot of attention. It was so different then. You played under the radar. There was no hype. There was no glory.

KB: What do you remember about your experience in Sweden?

HS: I was in Vancouver for the 2015 Women’s World Cup. There were fan-fests, pre-game parties and sold-out attendance at our game. I think we might have had a few hundred people there (in Sweden). Some were just our family and friends who had flown over [Laughs]. There were no sold-out crowds.

KB: In the clip of you scoring, it looks like you’re swimming in your uniform.

HS: We got all the hand-me-downs. I think we all received men’s extra, extra, extra, large jerseys, shorts and tracksuits. When we received the new tracksuits, they were so big that there was no way we could wear them – we were all swimming in them. And there are very specific regulations with FIFA as to how big a sponsor’s name could be on it. We had masking tape on our tracksuits because Score’s logo, who was our sponsor at the time, was too big, probably because they were old tracksuits; they weren’t created in the specifications that we needed for FIFA. So we went to the World Cup, the Canadian team was wearing masking tape on our tracksuits. And the Score logo was too big on our socks, so we had to cover our sock logo with masking tape. We really wanted to just focus on the game, but it does take away a bit of your attention with me cutting out the underwear that are in the shorts and rolling them four or five times because they were that big on me.

KB: It’s amazing you could even play well.

HS: The other funny thing is you have to have your name on the back of the jersey. That’s the specification by FIFA. Well, we didn’t, so our coaches had to stay up all night long with a machine, putting our names on the back of our jerseys before we played in the World Cup.

KB: In 2008, you were inducted into Canadian Soccer Hall of Fame. Is that the first big acknowledgement of what you had accomplished?

HS: I think so. That was the first time I think my mom would’ve noticed that it was a big accomplishment. My mom used to always say, “What are you playing soccer for? Why don’t you learn to cook and clean and be a good housewife?” I remember when I was getting inducted that year, a Greek magazine in Hamilton had done an article on me . So my mom, who didn’t speak really good English, got a hold of this newspaper and read that this was a bit of a big deal. And the induction happened on our Easter – and if you know anything about Greeks, Greek Easter is the biggest celebration. I remember when I first told her, she was so mad. “No way, you can’t miss Easter.” And then when she read the article, she ended up skipping Easter and coming to the event. So, for me, it was probably the first time my mom really saw that I actually accomplished something. It was more than just kicking around the ball in the backyard.

KB: What are your thoughts on women’s soccer today? Not too long ago there was media attention over the limited selection of merchandise available for the women.

HS: I think that’s probably very true. From what I remember, when they won the Olympic games, I would see people saying they couldn’t get anything [in their size] to commemorate that win. I love that the men are doing great. And I love that they’re coming out, speaking up on behalf of the women too because sometimes it takes that allegiance together to make change.

KB: Your career got derailed in 1999 because of a knee surgery, but you remain in great shape nearly 25 years later. How do you stay healthy and active?

HS: I went through an interesting phase in my life, after my knee injury halted a lot of things … I knew that sport always helped me feel better about myself. I couldn’t play soccer because of my knee, but what can I play? And then I started to play volleyball again because it wasn’t as hard on my knees. So, for me, it really is finding different ways for me to be active. It’s so much more than the sport. It’s the whole camaraderie around it. It’s the friendships, it’s the social aspects. Playing volleyball changed my whole life. I started playing volleyball and then it became my social circle, but it also allowed me to get out there and just be active. And I love trying different sports. So I’m also playing pickleball.

Right now, my knee’s a little bit twitched so I haven’t been able to do much. I just walk. I get out. Nature. I just always find that if I’m ever feeling crappy, the best way for me to get out of it is to get out and just do something. Even if it’s just going to the park and walking around a little bit. It just allows me to still keep my mental focus and keep me at least moving. I don’t walk fast but just walking and enjoying where I’m at.

A League of Their Own: As the New TV Series Debuts, Exploring the History of Women’s Wartime Baseball