Learning to Breathe: One Man’s Yoga Journey to Meditative Bliss 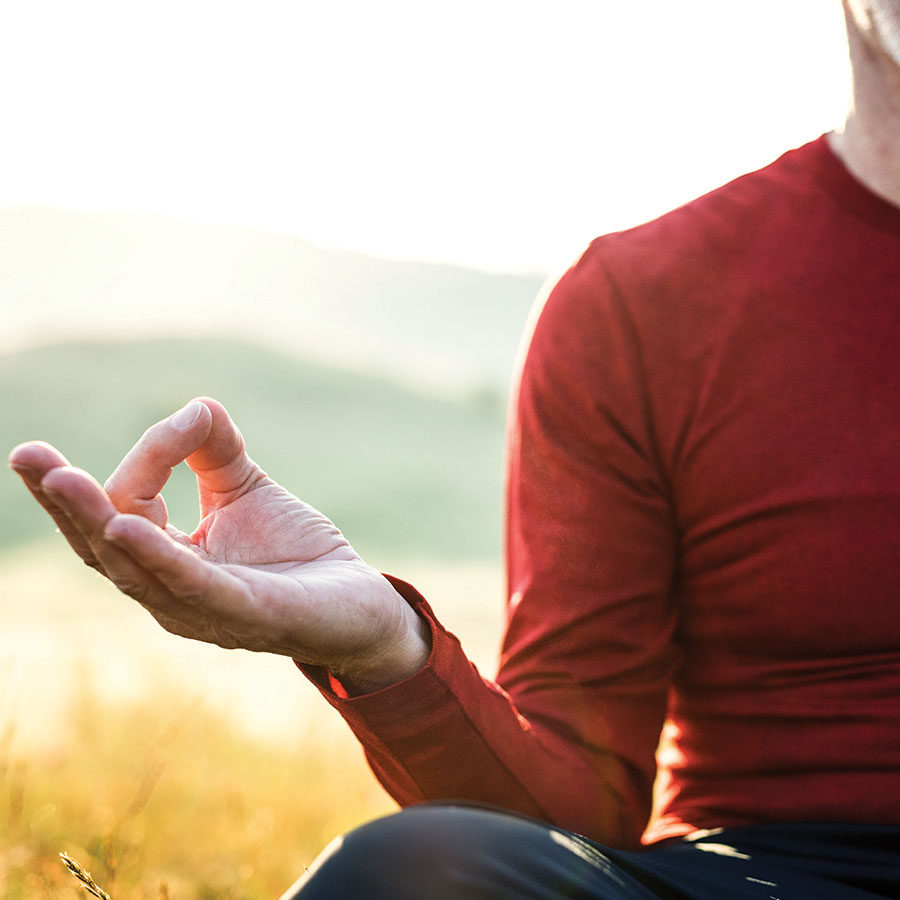 After years of jogging, author Don Gillmor turned to yoga. For the past decade, he's been sweating, breathing and posing his way to meditative bliss. Photo: Halfpoint Images/Getty Images

It’s more important than ever to find ways to stay fit and reduce stress. Today, on the International Day of Yoga, we revisit a 2019 story by author Don Gillmor, who chronicles how he found his way to meditative bliss through yoga.

In the ’70s and ’80s, I jogged. Even during the years I smoked, I jogged. They were good decades for both. But I quit smoking for obvious reasons and quit jogging after nagging hip issues and plantar fasciitis in my feet made it torturous. Like many of my generation, I turned to yoga.

For more than a decade, I’ve been taking yoga classes. I’ve taken classes in the mountains, on beaches, in parks. I’ve tried hot yoga, Hatha, flow, musical and silent yoga. I’ve been encouraged to breathe through my ears, to let my problems flow out of the top of my head, to let the planet in, to shut the world out, to feel the energy in the room, to find the energy within, to radiate positivity and love, find mindfulness and mindlessness, and to open up my root chakra, which was probably closed.

I once took a class in Costa Rica where the instructor told me that yoga was invented by an American soldier who was in a motorcycle accident.

“I thought it went back a bit further than that,” I said.

It is stories like these that may have prompted Indian Prime Minister Narendra Modi to create a Yoga Ministry in 2014 (officially the Ministry of Ayurveda, Yoga, Naturopathy, Unani, Siddha and Homeopathy, or AAYUSH). The idea was to recognize the history and power of yoga and, according to India’s first minister for yoga, to reclaim the practice as “India’s gift to the West.”

Its beginnings can be traced back more than 5,000 years in India, although the origins of yoga are complex and what we think of as yoga now isn’t what it looked like five millennia ago. “Nearly all of our popular assumptions about yoga date from the last 150 years, and very few modern-day practices date from before the 12th century,” writes David Gordon White, a professor in the religious studies department at the University of California, Santa Barbara in the introduction to his book Yoga in Practice.

The word yoga first appears in the Vedas, among the oldest sacred Indian texts (circa 15th century BCE), and over the centuries the practice has embraced a wide range of philosophies and activities. Yogis have been ascetics, mystics, healers, teachers, warriors and demi-gods. They have sought enlightenment and power. While there have been spin-offs and splinter groups, certain themes circle back to its ancient roots.

Tantric yoga can involve channelling sexual energy into a higher consciousness, and in modern times it is most associated with Sting. In one of the ancient Tantric disciplines, writes White, the “esoteric practice, involving the real or symbolic consumption of forbidden substances and sexual transactions with forbidden partners is the fast track of self-deification.” Or, as it was known to some of us, the 1970s.

Yoga has been many things over the centuries, and we tend to reinvent it in our own image. “Every group in every age,” White writes, “has created its own version and vision of yoga.”

In the 1960s, it had a counterculture stamp, especially when the Maharishi Mahesh Yogi — the one made famous by transcendental meditation and the Beatles (though not Ringo) — recommended practicing yoga daily. It has grown steadily since then and found a much wider audience. In 2001, fewer than five million North Americans practised yoga. By 2016, there were more than 40 million, 10 million of them men, and many of them baby boomers looking for an exercise that suited their aging bodies.

It isn’t for everyone though. Hot yoga comes with warnings that people can over-stretch in the heat, causing damage. A 2012 New York Times article titled, “How Yoga Can Wreck Your Body” quoted a yogi saying, “The vast majority of people should give up yoga altogether” as it was likely to cause harm.

It hasn’t stopped a mad rush to the yoga studio, and there are no shortage of options: restorative, hot, Vinyasa, Hatha, Ashtanga, pre-natal. Yoga with dogs, goats, and crystals. Nude yoga, kundalini, yin, Anusara, and Jivamutki. While it has been commodified (Americans spend more than $15 billion on yoga classes and products each year ), there remains a strong spiritual component. In the West, it is often a loose, somewhat personal spirituality in keeping with the secular age, although we may share some of the self-deification goals of the fifth-century version. Behold the Age of Lululemon.

I mostly go to a hot yoga studio that is a 10-minute walk from my house. The room is heated to 40 C with 40 per cent humidity. There are six philosophical pillars underpinning the studio’s practice: be accessible, be healthy, live green, live to learn, community support, and be peaceful. There are days when I am maybe two for six. There are various classes on offer, but I tend to go to the standard class with its rigidly fixed series of poses, held for a specific duration. This sounds repetitive and it is, but it is in that repetition that I find a meditative bliss.

I sometimes opt for the more cardio-intensive flow class. When I come out of a 75-minute flow class where I have consumed a litre of water and sweated out two litres, I feel like Gandhi must have felt: calm, wise, centred, ready to lead a grateful nation. This can last most of the day, or it can evaporate in the Starbucks lineup on the way home. So, a journey, not a destination.

There have been a few surprises. I sometimes take a musical flow class where gentle melodies or quiet East Asian sounds or whale noises tend to dominate. On one morning, it was all Elvis, all class. You would think this would kill the mood, but yoga is nothing if not adaptable; stretching with the King turned out to be refreshing.

There has been the occasional disaster. Several years ago, midway through the class, the otherwise laudable instructor said to us, “Now we’re going to try some partner yoga. Let’s all do tree pose and support one another.” We were supposed to reach out and support the thigh of the person beside us. This was a hot yoga class and I was in the corner. The nearest partner was a pasty, shirtless man roughly my age who reached out a sweaty hand and offered a weak smile. I didn’t want his support. I didn’t want to support him. But there we were, tottering together in the corner, joined and swaying and resentful.

Yoga has been studied for its potential to reduce blood pressure, depression, anxiety and chronic pain; stimulate cardiac function and build strength; improve balance. It promotes flexibility and may help mitigate arthritis. These are subtle and accumulative benefits. For me the immediate payoff is that it’s calming, inducing a stillness that is difficult to find in urban Toronto, where gridlock, over-crowded subways, angry motorists and screaming cyclists are a way of life.

The Seattle Yoga noted that 98 per cent of yoga practitioners consider themselves to be beginners or intermediate. I certainly fall into this category. This is partly the humility that yoga tends to bestow on us, but it also speaks to the rarified levels that can be reached by the devout. A few millennia ago, the most accomplished yogis claimed to be able to transcend space and time. The goals are more modest these days, with occasional leaps of faith.

Years ago, Doug Henning, the magician who ran as a political candidate for the short-lived Natural Law Party, invited a group of journalists to the University of Toronto’s Hart House to watch yogis levitate. They were about six of them, sitting in a lotus position on large mattresses. There was a lengthy lead up. I anticipated something magical. Henning was, after all, one of the greatest magicians of his era. I expected yogis floating around Hart House like Casper the ghost. Instead they began to bounce on the mattresses, propelling themselves upward with their hands. This went on for a while. Then it stopped, with Henning declaring that they had, in fact, levitated. When a journalist suggested that all they had done was bounce (although bouncing in the lotus position is hard enough as it is), the response was that they had lingered at the top of their bouncing arc longer than gravity normally allowed. A form of levitation.

Still, there are uplifting yoga stories. B.K.S. Iyengar, whose book Light on Yoga is considered a seminal text, died at 95 and was still doing 30-minute headstands. I am unable to do a 30-minute headstand, but yoga has been good for my slumped writer’s posture, and oddly, for my breathing. You would think that after 60 years, you’d have that down, but it’s trickier than you think.
There are yoga classes devoted to nothing but breathing, and there are health benefits linked to yogic breathing, with scientific evidence to support it.

Once, while lying motionless in the final shavasana pose, or corpse pose as it is sometimes ominously called, the instructor told us to send our breath to our extremities. It had been a gruelling 90-minute flow class and the temperature had climbed past the customary 40 C. I was emptied, spectral, bordering on hallucination. I took deep breaths and tried to send the oxygen through my body like one of those CSI montages where you see bullet fragments zipping toward someone’s heart. It worked. At least it felt like it worked. And I may have levitated. Just a bit.

This story was originally published online on Dec. 12, 2019.

3 Reasons Why Yoga Is Sweet For Diabetes

Increase Your Libido With These Simple Yoga Poses