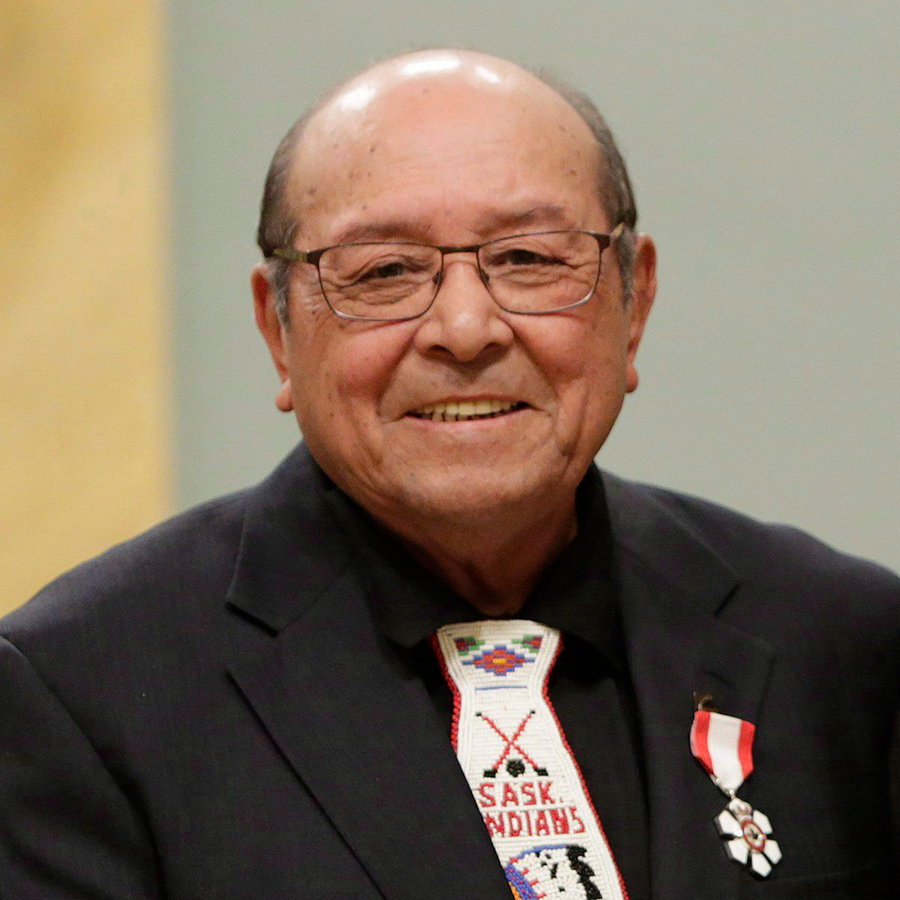 Former NHL player Fred Sasakamoose was recognized with the Order of Canada in 2018 for his work in indigenous affairs. Photo: The Canadian Press/David Kawai

Fred Sasakamoose, who became the first treaty status First Nations athlete to ever play in the NHL and later a champion of Indigenous culture, has passed away at the age of 86 due to complications from COVID-19.

Sasakamoose’s passing evoked an outpouring on social media, especially from family and friends in Saskatchewan who remember “Chief Thunderstick” not only for his trailblazing athletic achievements but also for the work he did supporting Indigenous Canadians in the province.

Fittingly, he was also the driving force behind an annual competition for hockey players from First Nations communities across the country, which became known as the Chief Thunderstick National Championship for Indigenous Hockey Athletes and held each year in Saskatoon.

Sasakamoose’s son Neil posted a tearful tribute to his father on Facebook last night, saying, “the COVID virus did so much damage into his lungs, his body just couldn’t keep up.” He said his father had accepted his fate, telling his son: “I’m not scared. I’m ready to go.”

Neil remembered his father as a strong man and a champion of Indigenous culture. “When someone passes as strong as Fred Sasakamoose, it leaves a lasting impact. He believed in his culture, his language and his people. He belonged with his people on the reserve.”

Of Cree descent, Sasakamoose was born in 1933 in Debden, Sask., and grew up on the Ahtahkakoop Indian Reserve. A natural athlete, he quickly developed into a top-flight hockey player, starring for his residential school hockey team in Duck Lake.

Hockey seemed to provide an escape from the horrors of the residential school in the 1940s, where he was ripped away from his family at a young age, was sexually abused by his fellow students and suffered severe punishments at the hands of his teachers.

Testifying in 2012 before the Truth and Reconciliation Commission, which was set up to document the shocking abuses that occurred to Indigenous children placed in the residential school system, Sasakamoose recounted the damage the much-reviled school system had on his family and community.

“The priests never talked twice,” he told the commission. “The second time, you got the strap.” He left the school as soon as he could, recalling that he told staff: “I’m going home to my mother.”

Leaving the school provided Sasakamoose with a new lease on life. “My gosh, I felt good,” he told the commission. “I felt that the world had changed, had opened a gate for me. There was no more wall on the other side of these girls that I never seen that were there for last ten years. We were segregated from them; you couldn’t talk to them, even my own sister.”

One good memory Sasakamoose had of his school days was a friendship he formed with a priest who saw the skills the young man displayed on the ice and encouraged him to pursue hockey career. “Father Roussell had a dream,” he recalled. “He told me, ‘Freddie, I’m going to work you hard, but if you work hard, you’re going to be successful.’”

And Fr. Rousell’s prophecy came true. At 16, Sasakamoose starred for the Moose Jaw Canucks of the Western Hockey League, winning the league MVP honours in 1953.

His play drew the notice of scouts and he signed with the Chicago Blackhawks (a team whose logo, ironically, is a profile of a Native American) and played his first game against the Boston Bruins in November 1953.

“I went to the Chicago,” Sasakamoose recalled in a NPR documentary. “Wow. I look in that dressing room of the Chicago Blackhawk. I see number 21. On top of that number 21 – ‘Sasakamoose’. That’s what it was all about.”

Although his NHL career was brief, consisting of only 11 games, he was a true pioneer. As the first Treaty Status First Nations player to make it to the big leagues, he soon became a beloved icon in Indigenous culture. His story inspired other children, like Jordin Tootoo, who tweeted that Sasakamoose “paved the way and allowed us to believe in our dreams,” and Calgary Flames superstar Theo Fleury.

After his playing career wound down, Sasakamoose returned to Ahtahkakoop Cree Nation where he served as chief and member of the band council for the next three decades. He became a fierce champion of Indigenous culture and initiated many worthwhile initiatives on the reserve, including addiction and family violence prevention programs.

By sheer determination, he managed to make it through the terrible experiences of residential school, fit in with the mostly white hockey players of the the time and somehow make his way all the way to the NHL.

NHL Commissioner Gary Bettman celebrated Saskamoose’s achievement as, “the culmination of years of dedication to overcoming adversity in pursuit of a dream, and the pivot point at which he turned his focus to helping others pursue their dreams.”

And NHL players of Indigenous descent also recognized the qualities of this amazing man. Former superstar and friend Bryan Trottier hailed him as “a pioneer, somebody looked at with First Nation blood who was an achiever, broke barriers.”

Former Philadelphia Flyers sniper Reggie Leach remembered being filled with pride as a young player when learning about Saskamoose’s story.

“If you think back, it’s unbelievable the things he had to go through and what he went through going to residential school and accomplishing what he did. It’s just amazing,” said Leach.

The Strength of Canadian Indigenous Communities in the Face of Inequality

COVID-19: How the Crisis Can Call Us Toward Reconciliation With Indigenous Communities