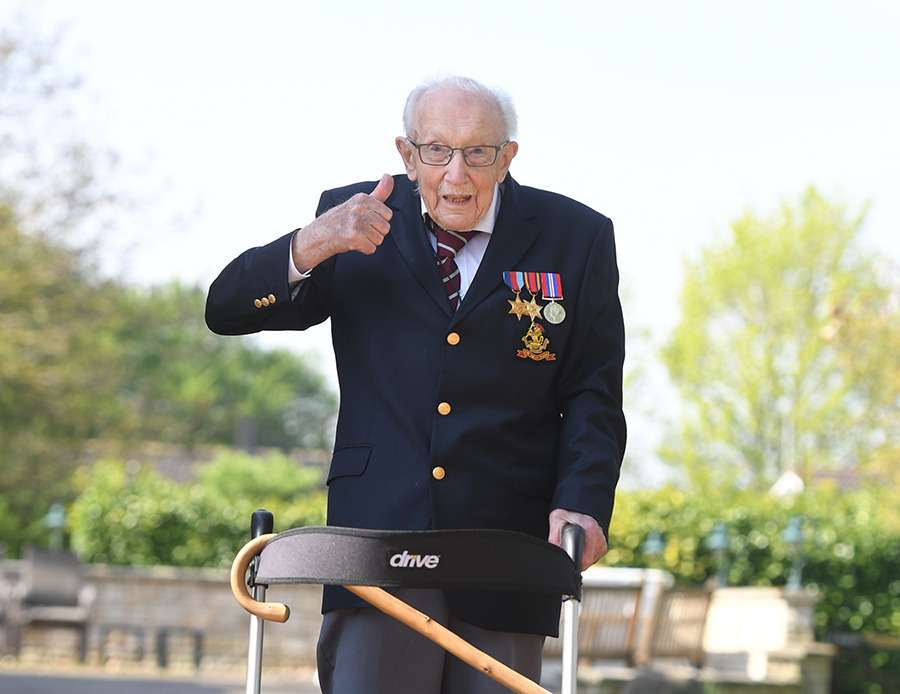 Thanks to his fundraising efforts and loveable personality, Captain Sir Tom has become a worldwide symbol of strength, bravery and selflessness during these troubled times. Photo: Joe Giddens/PA Images via Getty Images

British Second World War Veteran Captain Sir Tom Moore captured the attention of the world — and earned himself a knighthood — when he raised more than £32 million (over $54 million Canadian) for National Health Service (NHS) workers on the front lines of England’s COVID-19 response by walking 100 laps of his Bedfordshire garden ahead of his centenary in April.

And now, as England enters its second lockdown, Moore is asking people to walk along with him to raise money for his Captain Tom Foundation, which aims to combat loneliness and support people facing bereavement. The initiative encourages people to log their walking on social media using the hashtag #WalkWithTom over the next week.

The centenarian, who appeared on BBC Breakfast alongside his daughter, Hannah Ingram-Moore, offered words of encouragement about the recent COVID measures, saying, “We are in a difficult situation but we’ll get through it if we all join together.”

“We are British and we always get through,” he said.

“We’ve got to consider that during this next coming period there are going to be a lot of unhappy people who are lonely and frightened and we need to go out and help those people,” he said. “That’s why we’ve got the Captain Tom Foundation.” Prime Minister Boris Johnson has said the four-week lockdown, which begins today, is necessary to prevent a “medical and moral” disaster for the NHS as coronavirus cases continue to rise across the nation. Under the latest restrictions, pubs, restaurants, gyms and non-essential shops will be forced to close until Dec. 2. People are being asked to stay at home.

Inspiration for a Nation

Since completing his 100 laps, Moore, who became affectionately known as “Captain Tom,” has continued to inspire super seniors to spread their own messages of hope and caring during these difficult times. That includes a 104-year-old woman who recently walked the length of a marathon, one block a day, to raise money for charity.

And as Zoomer previously reported, other instances include a 99-year-old Manchester woman who raised thousands of dollars after pledging to walk her driveway 100 times before turning 100, a 90-year-old Scottish woman who climbed the stairs in her home 282 times (the equivalent of climbing the height of Suilven mountain), a 91-year-old Welsh farmer who completed 91 laps around his home to raise money for the NHS and a six-year-old Bristol boy with spina bifida, who raised £93 thousand — in one day.

In addition to being knighted by Queen Elizabeth in July, Captain Sir Tom recently released an autobiography, and his story will also be told in an upcoming biopic, which is set to begin shooting in 2021.

Prince William, Duke of Cambridge, Battled COVID-19 in April But Kept It a Secret