11 Things to Know About Chrismukkah 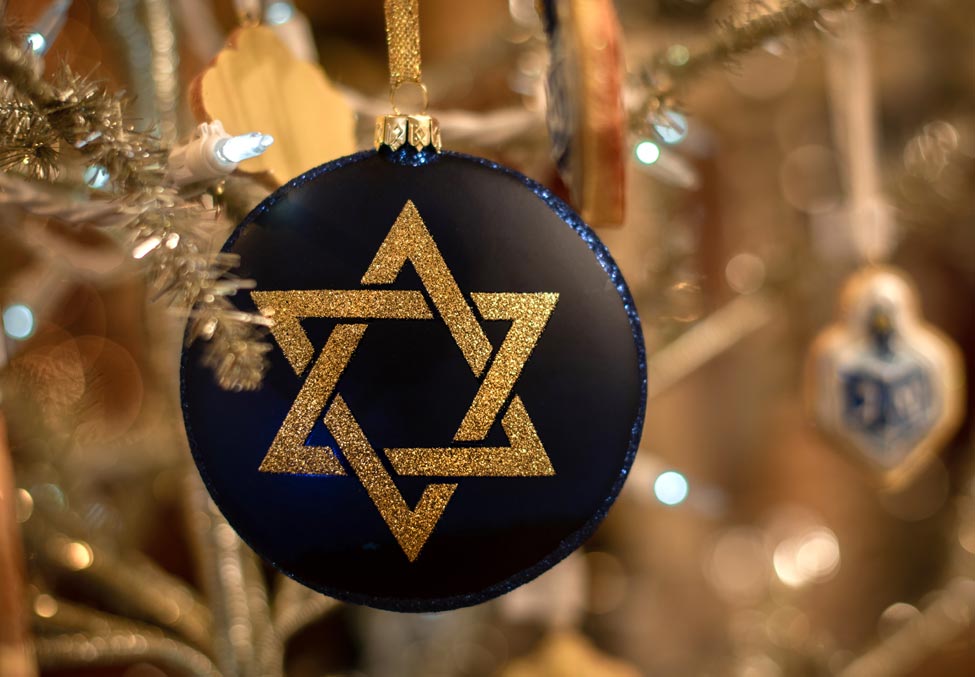 As Jews light the first candle of the menorah thisWe look at how the rituals of observing Christmas or Hanukkah are different or the same. Photo by Tim Mossholder on Unsplash

Chrismukkah refers to the merging of Christmas and Hanukkah in an interfaith family. As Jews light the first candle of the menorah on Dec. 18, we look at 11 ways the rituals of observing the holidays intersect.

1. Latkes may be served with the turkey instead of mashed potatoes, and cranberry sauce can accompany the brisket. If you happen to be of Scandinavian heritage and pickled herring is on your Christmas Eve menu, then that’s perfect! (Try our Traditional Latkes recipe!)

3. “O’ Tannenbaum” is a popular Christmas carol. It’s also a fairly common Jewish name. That’s because the German word “tannenbaum” does not translate as “Christmas tree” but rather as “fir tree” or “pine tree,” with “baum” meaning “tree” in German. (On a personal note, both my parents had “tree” last names: Rosenbaum and Kestenbaum.)

4. Lighting up the dark around the winter solstice is a significant part of both holidays. Christmas lights decorate houses, buildings and trees outdoors and indoors. Candles and hearths figure prominently; the word “hearth” is rarely heard except at Christmas. For Jews, Hanukkah is all about lighting candles, an additional one for each night of the eight day holiday. Christian candles are mostly scented like evergreen trees or spices while Hanukkah candles are mostly not scented. Somebody should tell Yankee Candle to make Chrismukkah candles. They’d be menorah candles scented like frankincense and myrrh.

5. Ugly Sweaters that do double duty as Christmas and Hanukkah sweaters are twice as ugly and therefore especially coveted. They proudly proclaim subversiveness in every way. Typical designs include a reindeer with a menorah on its head instead of antlers and a menorah that has candy canes instead of candles. Google Chrismukkah ugly sweaters for more horrors or find more tasteful interfaith accessories at interfaithliving.com.

6. How appropriate! Approximately half of the 25 bestselling Christmas songs were written by Jewish composers, including “I’m Dreaming of a White Christmas”, “Santa Baby”, “Rudolph the Red Nosed Reindeer”, “I’ll Be Home for Christmas”, “Chestnuts Roasting on an Open Fire”, “Silver Bells” and “A Holly Jolly Christmas.” It’s always suitable for people of any religious denomination to sing “It’s The Most Wonderful Time of the Year” but this season you could sing “It’s the Most Ecumenical Time of the Year.”

7. Children of both religious denominations are no longer content with the simple gifts; oranges for Christmas and chocolate coins for Hanukkah. Christian and Jewish children want the same things for the shared holiday: drones, iPhones, robots, Florida vacations…

8. Both holidays celebrate legendary events that took place almost 10,000 km from Toronto more than 2,000 years ago that are associated with the winter solstice. Hanukkah commemorates the rededication during the second century B.C. of the Second Temple in Jerusalem after the revolt of the Maccabees against their Greek-Syrian oppressors. There was just enough oil found in the temple to burn for one night, but it lasted eight nights. Christmas celebrates the birth of the saviour Jesus Christ in a manger in Bethlehem and the beginning of a new era.

9. Gambling is part of both holidays. Spinning the dreidel to see which side comes up is a basic game of chance, along the same lines as spinning a roulette wheel. Placing a Christmas present under the tree is also a game of chance: is it a gift someone will love and cherish or will it be recycled by next year?

10. Both holidays have colour schemes, some of which are different and some of which are the same. Red and green are Christmas colours, of course and it’s everything blue and white for Hanukkah. And silver and gold are the colours of Chrismukkah. And then there’s tartan. For some reason, people who celebrate Christmas have this seasonal urge to turn their abodes, even if they’re tiny condos, into something that resembles the interior of a Scottish hunting lodge.

11. Christmas is a big deal and major holiday for Christians and every year there’s concern that the religious meaning of the holiday has been overwhelmed by the consumerism. Hanukkah is a minor holiday that’s become important to many Jewish and interfaith families because it happens in tandem with Christmas. Chrismukkah is a seasonal, non-religious celebration that’s a winter break dedicated to family, fun, presents, travel, parties and gaining weight which must be lost beginning after New Year’s Day.