Edible Art: A Treat for the Eye (as Well as the Tongue), That Can Also Convey Deeper Meaning 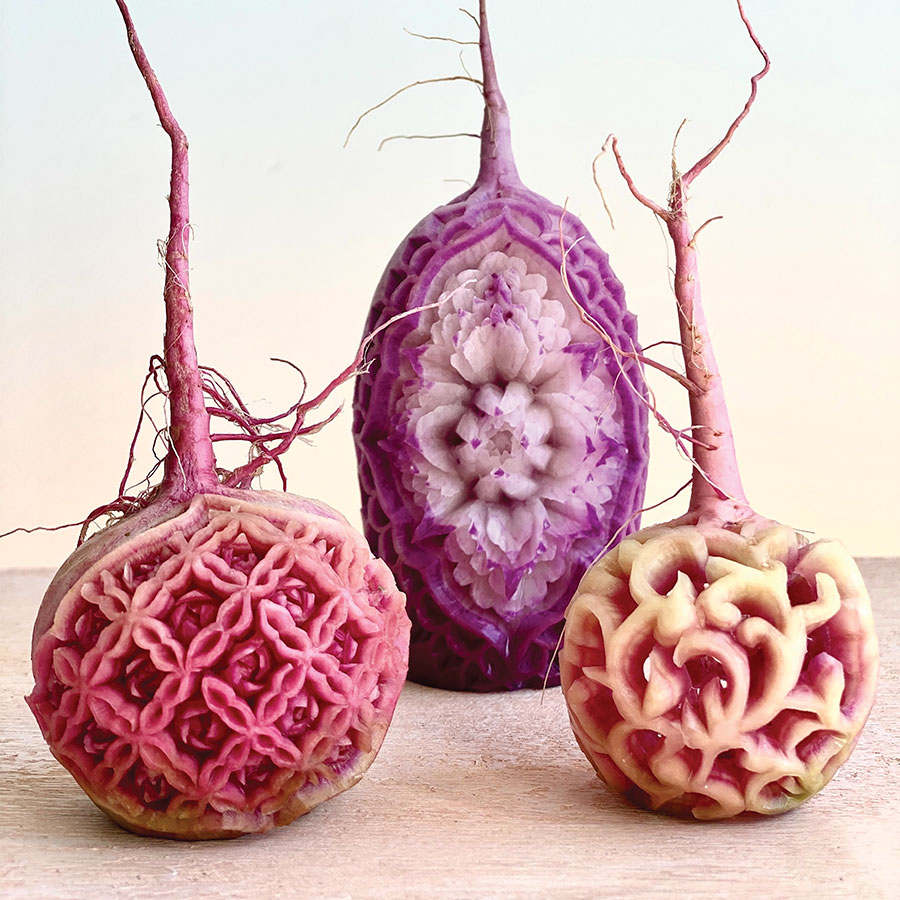 We all need to eat. That’s why food is the slyest, cleverest art medium. But creativity has been thwarted by chaos in the hospitality industry, which was hit hard by the pandemic. Professional experimentation with food as art – a trend that, before 2020, had been fuelled by the relentless social media beast, ever-hungry for more compelling imagery – was put on hold.

A new dawn is here. In the same way that self-expression exploded into a riot of extravagance on fashion runways and the streets, the food and beverage universe has become a Technicolor field of dreams.

Elaborate anthropomorphic gateaux, smoking cocktails, butter, ice and chocolate sculptures and vegetables transformed into dragons or demons have long existed as fleeting objects of beauty and awe, destined to disappear down our throats.

At the pinnacle of artful food installations is Laila Gohar, an Egyptian-born chef who splits her time between Barcelona and New York. She has spent the last decade building extravagant tableaux for luxury brands and private clients: marshmallow mountains, baguette chandeliers and classical Greek sculptures wrought in butter that take months to conceive and execute, and moments to destroy. These are her decadent statements on the multi-sensory pleasures of consumption.

Making food into art involves an extra ingredient or two, something that sparks emotion, elicits conversation, fosters cultural understanding or offers a critical look at pressing issues like food waste.

Amid the spectre of food shortages caused by climate change, war and pandemic-related supply chain issues, playing with food is a joy and a release, and a deft way to introduce socially relevant topics into the public consciousness. Here are some notable Canadian and international artists using food to communicate ideas and emotion.

Vancouver’s Fairmont Pacific Rim Hotel beverage director Grant Sceney created cocktails inspired by artist, novelist and designer Douglas Coupland’s art exhibit Green Light, Red Light, on display at the Pacific Gallery. “I didn’t approach the art with a set state of mind,” he says. “I went and stood in front of his pieces and wondered how and if they could be incorporated into a cocktail, and what inspired me about each piece.” Thus the Clint is a bourbon-based, rustic-style drink, “much like the character Clint [Eastwood] plays in his westerns.” Coupland’s painting of the actor has blue, red and yellow splotches across his face, “like someone shot him with a paint gun.” The cocktail has blueberries and chartreuse to “incorporate a bright flavour contrast on top of a rustic backbone.”

British food design duo Sam Bompas and Harry Parr lead a creative agency of chefs, architects, filmmakers, artists and psychologists, among other disciplines, who conceive and execute experiential food projects. One notable example is their Alcoholic Architecture project, an inhabitable cloud of gin and tonic, where guests at a pop-up bar in London’s Borough Market walked into a mist of the drink to “consume” it. Their luxury jelly business, Benham & Froud, is both a business and an ongoing commentary on how internet culture drives evermore extravagant visual feats. The artists have taken that most quotidian of concepts – the jelly mould – and stretched the limit of what shapes can be created, and what food and objects can be suspended within. Canadian food designer Amanda Huynh, who interned with the groundbreaking duo, says: “It’s a jelly version of British architecture; jelly is a traditional food there, as in jellied eels and fish in aspic that you find in supermarkets. They are bringing another form to it, and exploring the limits of the manufacturing processes.” Also, the jellies are really cool.

Carving Out a Career

When Mia Bureau was young and searching for her calling in life, she wrote a letter to the universe, asking for direction. Soon after, a chef friend offered her a gig that involved vegetable carving, and she was hooked right away. Bureau worked through the libraries of culinary schools to figure out the tools and techniques she needed, and opened a Montreal business, Sculpture Culinaire Mia Bureau. She takes commissions to carve grand pieces for companies and events in and around Montreal, and also teaches rudimentary and advanced carving classes. She began with dragons, and now her imagination is the limit. From a 20-kg (45-pound) pumpkin sculpture to orchids made from radishes, Bureau can do anything – even your portrait in a wheel of cheese. Perishable suits her just fine. “I want my art to be alive, but ephemeral.”

When Kate Frash moved to Canada from Russia 12 years ago, she brought the memory – and the secret recipe – for her grandmother’s honey cake. “It smells like home for me.” It has remained at the heart of a career she started from scratch in Toronto: making elaborate, highly personalized works of art conjured from cake, cream and fondant. Frash is mesmerized by the interaction between creator and consumer. “My art disappears, but that is the point. It gives so much joy and happiness. There is a fragile beauty to it.” In addition to the usual fare – unicorns and Minecraft cakes for kids, albeit in the $12-plus per slice range – Frash takes on commissions for the Hazelton Hotel in Toronto, where she creates custom wonders for visiting celebrities during the Toronto International Film Festival. Gigi Gorgeous, the Canadian YouTube sensation, got a ladybug cake to reflect her good luck charm. Actress Priyanka Chopra got a cake that mixed themes from her festival movie, 2019’s The Sky Is Pink, together with traditional Indian patterns. “I spend weeks researching,” says Frash. “When it isn’t a surprise, I spend as long as I can interviewing the person the cake is for, to be able to translate my interpretation of their personality for them.” Taste matters, she says, so she collects flavours from her travels all over the world, and combines them in ways that delight and surprise.

Calvin Wat, the head pastry chef at Shangri-La Toronto, studied in Paris with macaron superstar Pierre Hermé, “the Michael Jordan of pastry.” Wat says hotels are hot spots for food innovation because they have the resources to devote to experimentation. “French pastry arose as an art form because the kings of France invested in its development as a way to show off the prosperity of the country.” In April, Wat created a special tray of sweet and savoury sculptures in collaboration with Cirque du Soleil for its new show, Kurios, to relaunch the afternoon tea program. “I wanted every piece to tell a story.” His Invisible Lobster Roll featured lightly poached meat in a tarragon emulsion, inside a hollow, transparent bread roll made using Japanese kuzu starch. “It is a nod to the Cirque and a portion of the show where you hear the circus acts, but cannot see the performers.” An important aspect to any discussion of art is how much practice and thought is necessary to achieve the goal. As for the finished product, he says: “People hesitate to break into it, but interaction and consumption is part of the art process.”

Amanda Huynh specializes in the emerging field of food design – an offshoot of industrial design – using food, packaging and experiences to change attitudes about what we eat. Her work focuses on the cultural importance of food and how it tells the story of peoples’ lives. “Food is the easiest way to tackle tough subjects. I can get someone to talk about anything if we talk about food first.” The Vancouver native, an assistant professor at the Pratt Institute in New York, made Diasporic Dumplings for Edible Futures, a Dutch exhibit that opened in Ottawa in 2019 and travelled to Vancouver and Toronto. At each stop, the traditional Chinese dough was filled with local ingredients: dandelion, shepherd’s purse and Canadian thistle in Ottawa; fireweed, wood sorrel and stinging nettle in Vancouver.

In May, Huynh updated Diasporic Dumplings for the University of Toronto’s Blackwood Gallery in Mississauga. “I worked with the Indigenous Centre at UTM, so the dumplings were filled with the three sisters: squash, beans and corn.” Huynh’s parents are Chinese, but grew up in Vietnam and Cambodia before they immigrated to Canada. “The project was about diasporic communities, transnationalism, border politics and coming to terms with the places you land,” she explains. The dumplings posit the question, “What does resilience taste like?” and show how food provides a cultural connection that nourishes us physically and emotionally.

A version this article appeared in the August/September 2022 issue with the headline ‘Too Pretty to Eat’, p. 86.

Naramata Magic: A Guide to This Okanagan Valley Town and Wine Region, Plus Recipes

The Indigenous Perspective: From Artists to Activists, News and Recipes, Revisit Our Top Stories from 2021