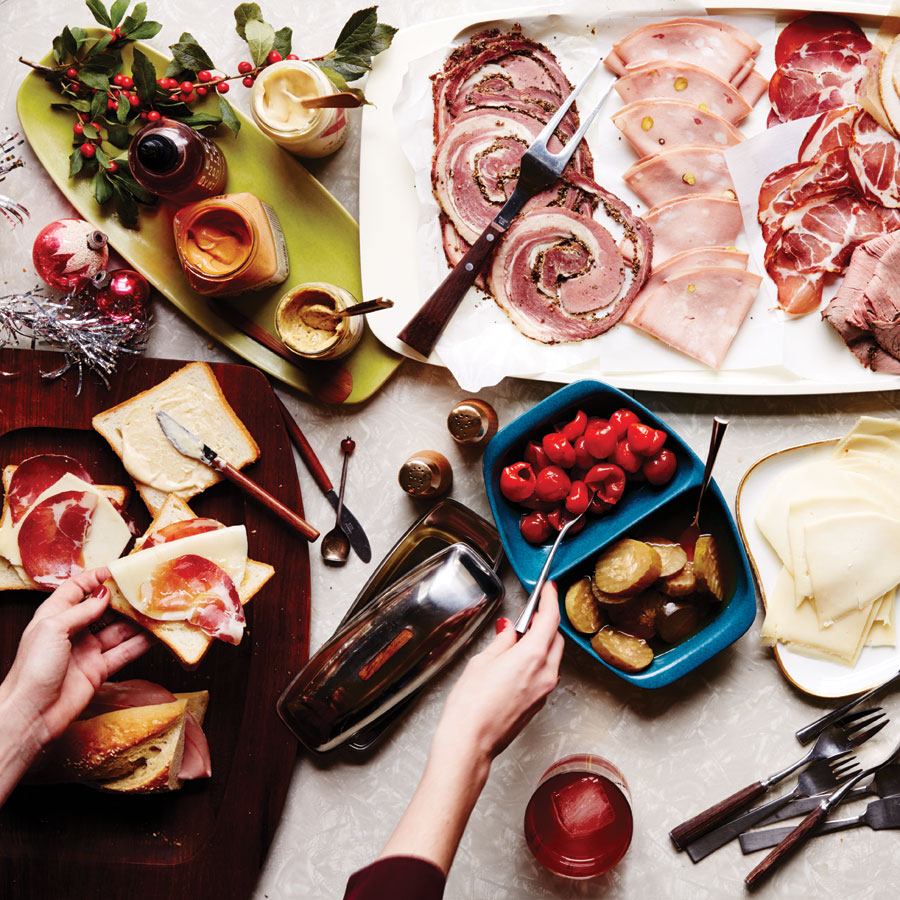 Food has become a battleground for the health-conscious. Photo: Peden & Munk/Trunk Archive

In an age where food carries so much social, cultural and psychological freight, how can host and guest ever survive the holidays?

Corey Mintz once had a guest who, when offered a labour-intensive platter of poultry, refused it because she didn’t eat Kentucky Fried Chicken.

No matter how many times Mintz, a food writer and author of the 2013 book How to Host a Dinner Party, explained that he bought the chicken and brined, breaded and fried it himself, she conflated it with KFC. “I don’t eat fast food,” she told Mintz, who hosted about a thousand people between 2009 and 2013 for his Toronto Star column “Fed.”

“In her head, it was an industrialized product that only existed like that,” said Mintz. “It was not a thing that was made from chicken.” Eventually, he gave up and offered more salad.

As the holiday season rolls around, fresh off the five pounds we gained at Thanksgiving, once again our thoughts turn to food: who to have over, what to make and — every host’s nightmare — how much to buy because God forbid we should run out of canapés.

But food has become so complicated in the Western world that every invitation must begin with an entreaty to guests to divulge what they can’t eat, what they won’t eat and what they don’t eat. When that cheese and meat tray comes out, some people will dive in with gusto, others will recoil in horror because they believe eating animals is unconscionable and some will shun the charcuterie platter because everything is forbidden: carbs (bread), nitrates (cured meat), sugar (grapes) and fat (cheese).

People don’t always come clean about dietary restrictions for as many reasons as there are diets. Unless asked, Mintz doesn’t volunteer he is allergic to raw bananas and Brazil nuts because the odds are slim his dinner plate will contain one or both. “They just aren’t ingredients that come up casually.”

Food has become a battleground for the health-conscious. Allergies, which affect the immune system and can be life-threatening, and intolerances, which affect the digestive system and can cause serious gastrointestinal discomfort, are reportedly on the rise. Factory farming has increased our production and consumption of red meat, which the World Health Organization’s International Agency for Cancer Research deemed a probable carcinogen in 2015. And Statistics Canada’s most recent data from 2016-2017 shows almost two thirds of Canadians are overweight or obese, which is strongly associated with a higher risk of stroke, diabetes, heart disease and cancer.

Add to that religion, genetic taste preferences, the environment, animal cruelty and diets of the day, and you have a veritable alphabet soup of dietary no-nos. In the section on food restrictions in his dinner party book, Mintz wrote: “If your friends are vegetarians, make the meal vegetarian. If your friends are vegan, get new friends.”

Times have changed in six years. Mintz has mellowed on vegans,
who eat no animal products, although after researching and
writing a story on the ketogenic diet, he says some followers adhere to it with intense fervour.

Now the internet puts reams of nutritional information, both worthy and suspect, at our fingertips, and celebrities and influencers amplify it. Social media companies sell our personal preferences to advertisers, who target us with ads for products tailored to meet our needs and desires. The food industry responds to consumer demand for instantaneous meals, thinking up ever more ingenious time-saving products like salad in a bag, packaged sushi and rotisserie chickens.

“The food landscape is changing so much, we almost need a graduate degree to understand what we’re putting on our dinner plates,” said David Ma, a biochemist and professor with the University of Guelph’s Department of Human and Health Sciences in Ontario.

Our land of plenty is littered with choice, and food innovation has evolved to provide a more personalized and individualized eating experience, which means that everyone is used to getting exactly what they like to eat and less of what they don’t. “Even going back 100 years, the staples on our dinner plates were some bread, some meat and potatoes, some vegetables, and that was it. Now we go down the grocery aisle, and there are hundreds and hundreds — thousands — of different foods,” said Ma.

Both Mintz and Ma, who is also the director of the Guelph Family Health Study that digs into the diets of more than 300 families, have noticed a generational divide when it comes to food preferences. “Older people just eat what’s on our plate,” said Ma, who is in the “over 40” crowd. “We didn’t like it, but we still had to eat it. And you had to clean your plate as well.” When Mintz asked guests if they had any food restrictions, overwhelmingly it was gen-X, -Y and -Z guests who said they couldn’t eat this or that. He believes it’s directly related to the way they get their information, and it’s not their fault.

Ma noted confusion reigns because social media has made nutritional gurus out of almost everyone and even the experts are at odds as the science plays out in labs. The other complicating factor is that nutritional science is a relatively young discipline, with the first vitamins discovered more than 100 years ago. “We’re learning many things on a day-to-day basis, which is why there are some flip-flops in nutritional sciences. One day, cholesterol is bad and the next day, it’s good. And then back to bad and maybe not so bad. So the science continues to advance.”

Until scientists devise the perfect diet, most of us are just eating in the dark. So there is good reason for guests to pass on Christmas cake or Hanukkah latkes or that punch bowl of eggnog, and it’s no wonder we have internalized diet dictums and demonized some of the world’s oldest sources of nutrition, like bread, meat and even the lowly potato.

The key to overcoming side dishes of anxiety, guilt, shame and criticism served up with our food, according to Ottawa clinical psychologist Dr. Julie Beaulac, is to start with self-compassion. Humans are “judging machines.” Our inner critics can beat us up for having a cookie instead of going for a walk, and that rut becomes a chasm that we can fall into over and over again. “Being kind is not letting yourself off the hook, but it is recognizing that this is hard. It is hard to eat really well over the holidays when there are chocolates and cheese and treats and alcohol in unlimited supply,” she said.

In her private practice, Beaulac coaches clients who ask for coping strategies around food and the holidays. Choosing to avoid a dinner or cocktail party altogether, for example, denies both guest and host of each other’s company, which is the whole point of holiday entertaining.

When sitting at a table groaning with turkey and all the trimmings, Beaulac suggests taking a moment to notice what thoughts arise. “And that pause is crucial in making more skilful responses to what’s important to us to live our lives in the most well way.” Without perspective, we can get caught up in rigid, food-restrictive thoughts like “I can’t eat any dessert.” Taking a mindful minute allows us to decide if our solution is workable.

Kindness, of course, works both ways. A host shouldn’t judge a guest or, worse, call them out in public for their food choices. “Another benefit of being compassionate and kind to ourselves is that we become kind and compassionate to others,” Beaulac said. “We learn that oftentimes we don’t need to say certain things. How does it benefit anyone to say to someone, “Why aren’t you eating gluten?’ Or ‘You know that (diet) book is stupid.’”

The host’s job is to make guests feel at home, so offer options. “A meal is really a social experience, and I think that’s why food is such a sticky issue,” Beaulac said. “It can leave others feeling like they belong and are welcome — or not.”

So whether you’re dealing with the stress of divulging your food issues as a guest or the stress of accommodating them as a host, the bottom line at holiday time is compassion and flexibility. Since he published that dig at vegans, Mintz met and married his wife, who is a picky eater, and is currently hosting a newborn baby, who eats pretty much 24-7, although her food preferences have yet to develop beyond breast milk.

The golden rule — do unto others as you would have them do unto you — reminds him that hosting is really about kind and thoughtful consideration of others. It’s not about you. And if you must judge, Mintz counsels you to do it in private with your significant other, long after the vegan — who stole a bite of his partner’s crème brûlée when you weren’t looking — has departed.

A version of this article appeared in the January/February 2020 issue with the headline, “What’s Your Poison?,” p. 78-83.

Ask the Expert: 5 Reasons Why Most Diets Fail