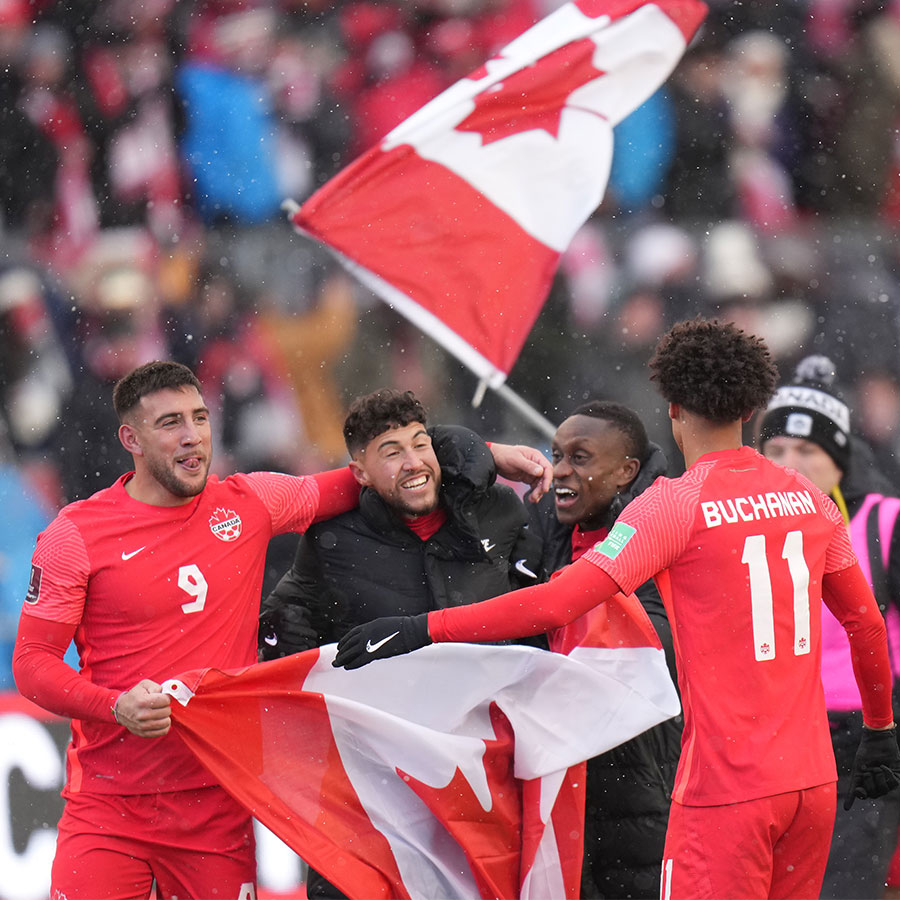 With yesterday’s spectacular 4-0 win over Jamaica in front of 30,000 flag-waving fans at a snowy BMO Field in Toronto, Canada’s men’s national soccer team has punched its ticket to Qatar to compete in this year’s FIFA World Cup.

Last night’s victory was the icing on the cake on what has been an electrifying run to qualify, something no Canadian side has managed to do since 1986. To get to this point, Canada had to beat countries like Mexico and the U.S., managing to startle the soccer world by qualifying at the top of their group.

After the game, it seemed that very few fans had left BMO Field in Toronto, wanting to prolong their celebration with the victorious men’s squad who were dancing, hugging and cheering on the pitch.

Many of the players struggled to put into words the significance of qualifying for this year’s World Cup in Qatar, an outlandish accomplishment in a country that’s known around the world for its prowess at hockey.

“As a Canadian kid, to dream of something like this was impossible,” said Jonathan Osorio, who plays his club soccer for Toronto FC. “To see it come to fruition is incredible. It’s a dream come true. I don’t know how else to explain it.”

The reaction by star winger Alphonso Davies, who has been sidelined since earlier this year due to mild COVID-related myocardia, best sums the sense of bewilderment, joy and relief that the players and soccer fans are feeling now that the qualifying drought has been broken.

How would you react to the fact that Canada, which has always been considered an international pushover when it comes to soccer, will play in this year’s World Cup while perennial powerhouse Italy won’t, having blown their lost opportunity by losing to North Macedonia? After last night’s game, Canada is now ranked 33 in the world — the highest ever for a club whose ranking usually hovers around the 90s.

Early on in this year’s World Cup qualifying quest, fans sensed this team had something special that previous teams lacked. Besides having more quality players than ever before, Canada boasted two players who are considered superstars in Europe — Davies, who plays for top German club Bayern Munich, and Jonathan David, who leads his French club, Lille, in scoring.

This sudden cultivation of talent has made memorable moments like these possible: like when Canada drew Mexico 1-1 at the rowdy Azteca Stadium — a huge achievement considering that all previous games played in Mexico have resulted in losses. And, of course, nobody will forget that famous celebration in the snow after Canada defeated Mexico while playing in arctic conditions in Edmonton in mid-November.

Soccer has come a long way since those days when it was considered an exotic sport in the country and an afterthought in the sports pages. While many kids played the sport for recreation, the top athletes would inevitably opt for hockey, baseball or basketball.

But with the global popularity of the sport, combined with the domestic success of the MLS pro soccer in Montreal, Vancouver and Toronto, has had a lot to do with attracting this generation of players. The team is also blessed with talent from players like Davies, David and Ismaël Koné whose families escaped turmoil in their homelands and immigrated to Canada.

Together, this “Golden Generation” comprises the most talented Canadian squad. When Canada last qualified in 1986, there were led by a rag-tag group of players who were not on the same level as today’s crop. Back then, there was distinct lack of representation from the big European clubs. Instead, many were drawn from the ranks of the North American Soccer League, with others from indoor soccer leagues.

The lack of talent showed when Canada took the pitch in Mexico in the 1986 World Cup. The team was completely outclassed in the three games they played, losing three-straight games in desultory fashion to France, Russia and Hungary by a combined score of 5-0.

In November, the Canadian team will travel to Qatar in an effort to improve on that experience. Even if they don’t advance to the next round, the hope is that they’ll leave with a better taste than they did in Mexico. And that there will be a spillover effect on the team for the 2024 World Cup, which alongside the U.S. and Mexico will be a host nation.

From Space Travel to Soccer Gold, Our Favourite Feel Good News Stories From 2021