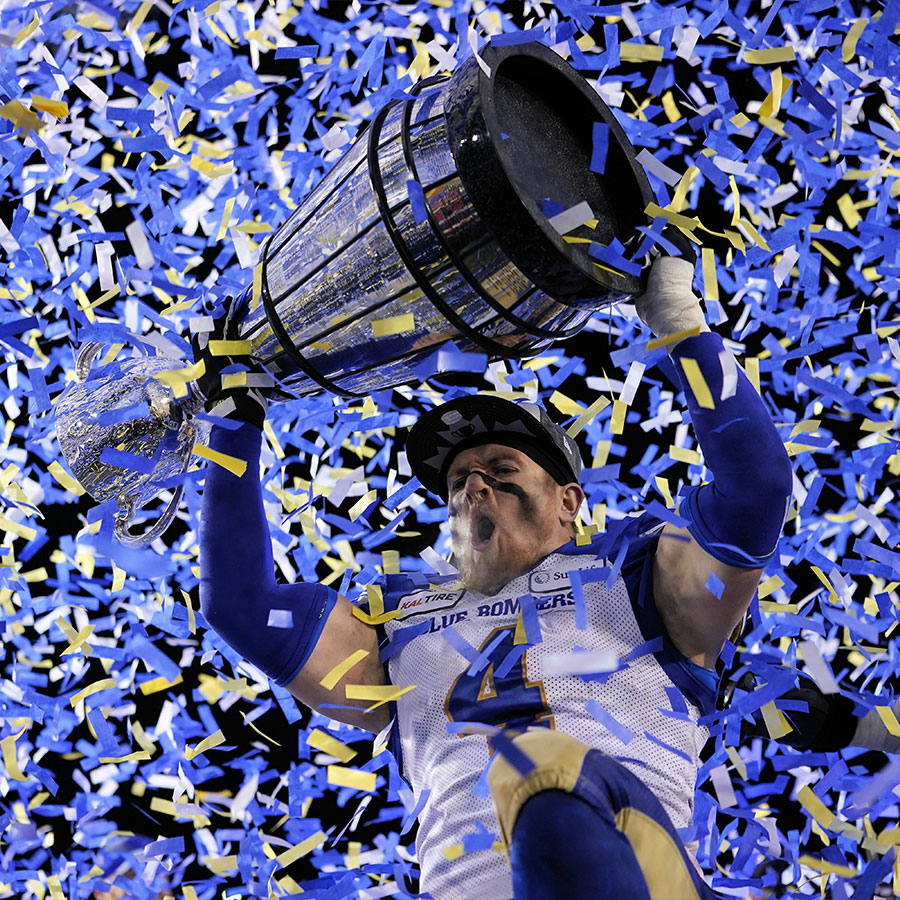 Adam Bighill of the Winnipeg Blue Bombers celebrates with the Grey Cup after his team beat the Hamilton Tiger-Cats 33-12 on Nov. 24, 2019 at McMahon Stadium in Calgary. This year's Grey Cup is a rematch of that game. Photo: John E. Sokolowski / Getty Images

On Sunday, the Hamilton Tiger-Cats will face the Winnipeg Blue Bombers on their home field with the winner taking home the Grey Cup.

While the CFL will always remain the poor relative to the mighty NFL, our title game often produces more compelling moments.

The Grey Cup is, of course, far older than the Super Bowl. This Sunday’s clash in Hamilton will mark the 108th time that teams have played for the CFL title — the first tilt taking place in 1909 between the University of Toronto Varsity Blues and the Parkdale Canoe Club. The Super Bowl, on the other hand, has only been around since 1967.

But beyond its long and storied tradition, the Grey Cup game always seems more memorable — whether it’s because of the weather, the wacky plays, the bizarre halftime show, the stunning twists of fate or the unforeseen outcome. These are the factors that make sports so compelling.

Here are five reasons why the Grey Cup is actually more entertaining than the Super Bowl.

The blowing snow, icy field and frigid wind provided a dramatic setting for the championship game. Football is meant to be played outside in less than ideal conditions. There have been Grey Cup games played in rain, mud, ice and with frigid temperatures — the team that adapts best often emerges champion. The Super Bowl, conversely, is always played in a dome or warm weather venue, cancelling out any influence from Mother Nature.

Because the CFL game isn’t over-coached like its U.S. counterpart, (where there are almost as many coaches as players) the game is often decided by moments of sheer randomness. The best sporting events are those decided by the unexpected and the players — not the coaches — are much more involved in the final outcome. In the 1957 Grey Cup between the Winnipeg Blue Bombers and Toronto Argonauts, Bombers defensive back Ray Bawel intercepted a pass and was running toward the end-zone when he was tripped by an Argos fan on the sideline!

Simply put, a CFL game is never over until the clock hits zero. In the 2017 Grey Cup in Ottawa, the Calgary Stampeders had a seemingly insurmountable lead with three minutes left. With time ticking away, the Argos clawed their way back (including returning a 110-yard fumble return for a touchdown) and took the lead with 39 seconds to play. No problem, the Stampeders took the kick-off and marched down the field — very nearly snatching victory right back. In the Grey Cup, the game is never over until it’s over.

During the Grey Cup half-time show, our performers have to sing amid freezing cold — often snowy — conditions. Could there be a more Canadian moment than when Shania Twain performed her 2017 halftime show in Ottawa in a raging blizzard. The best part? Shania entered the stadium on a sled pulled by huskies!  The Super Bowl half-time show is basically a Las Vegas revue, featuring mainstream singers playing their favourites in a ridiculously over-the-top but highly-staged performance.

5. The True Spirit of Sport

No one’s getting rich playing CFL football — not the owners, the coaches and especially not the players. The highest paid CFLer is B.C. Lions quarterback Mike Reilly, who signed a four-year, $2.9 million deal in 2019, which works out to 700,000 per season. The NFL’s highest paid player is Kansas City Chiefs QB Patrick Mahomes, who brings home a cool $45 million per year — which works out to roughly five times the CFL’s total payroll. These athletes, many from the U.S., come up here for the chance to play because they love the game. There’s so much money in the NFL, it’s almost overtaken the game. No danger of that happening in the CFL, one of the last leagues where the sport still comes first.

What Makes Tom Terrific? 5 Reasons Why Brady Continues to Defy Age and Remain at the Top of His Game

4 Ways to Celebrate the Grey Cup Through Food