“I Worked Harder”: Phil Mickelson Explains How, at 50, He Became the Oldest Golfer Ever to Win a Major 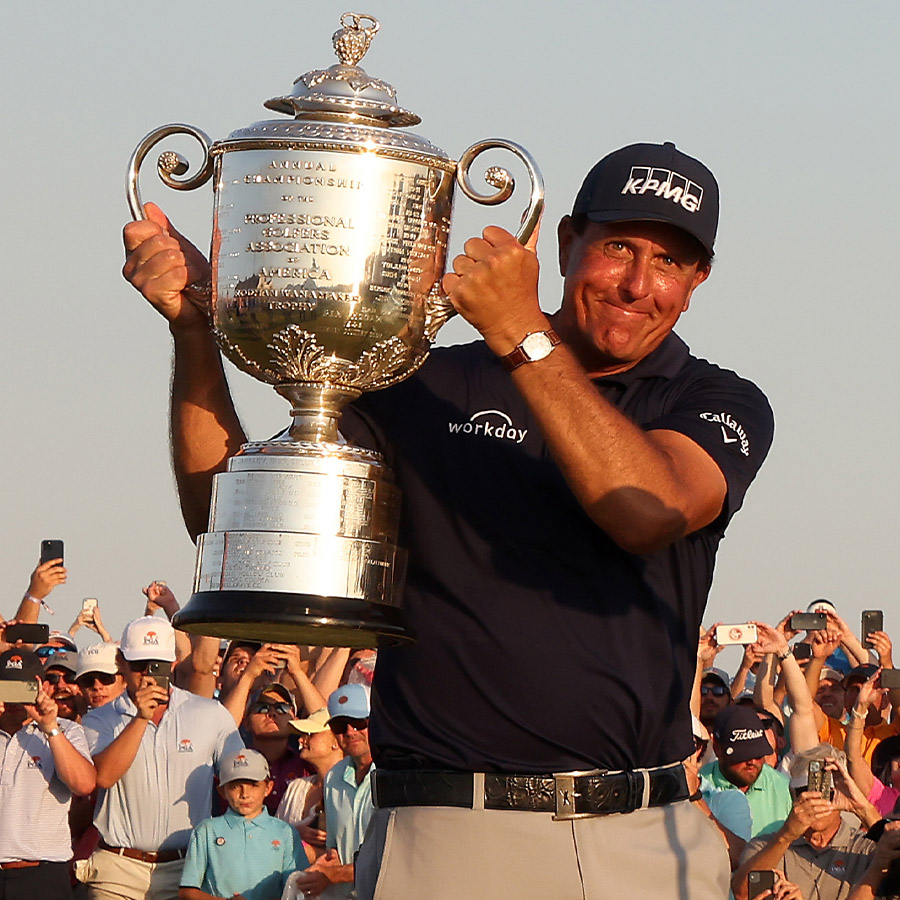 Phil Mickelson, 50, celebrates with the Wanamaker Trophy after winning the 2021 PGA Championship on May 23, 2021. Phil Mickelson explained that hard work and a new approach helped him become the oldest golfer to win a major. Photo: Jamie Squire / Getty Images

When Phil Mickelson sank his final putt at the 18th hole of the 2021 PGA Championship this past Sunday, capping a remarkable performance that saw the 50-year-old become the oldest golfer ever to win one of golf’s major tournaments, the usually loquacious lefty struggled to find appropriate words to describe how it happened.

His answer speaks volumes as to why, at the advanced age of 50, Phil was able to conquer the extremely difficult conditions at the Kiawah Island Ocean Course, fend off challenges from a field of higher ranked and younger golfers and survive a chaotic throng of raucous fans on his way to his stunning victory.

By virtue of winning this year’s PGA Championship, Mickelson now becomes the oldest golfer ever to win one of golf’s majors, which include the Masters, the British Open and the U.S. Open. The previous record holder was Julius Boros,  who was 48 when he won the PGA Championship in 1968.

The notion of Mickelson outworking the opposition must seem strange to many golf fans. While he’s been a top-ranked golfer for years, he’s never been known for having a strong work ethic.

Always a little overweight and lacking the imposing physique of today’s younger golfers, in the past he often fell back on his fabulous talent and didn’t pay too much attention to diet or training. While that strategy helped him win five majors, there was always the feeling that his career could have been better had he spent a little more time in the gym and a little less on the corporate circuit.

And until this weekend, his retirement seemed on the horizon. With his last major victory in the rearview mirror (he captured in the British Open in 2013), analysts and fans assumed he was on the downside of his career and that his days of winning big tournaments were behind him.

Mickelson, however, obviously felt different. Instead of living off his healthy corporate endorsements and eventually shifting to the broadcast booth — the normal path for many golfers his age — for the first time in his career he began seriously focussing on a strict diet and workout regimen similar to the ones that allow top older athletes (like soccer star Cristiano Ronaldo, 36, football legend Tom Brady, 43 or tennis great Serena Williams, 39) to remain at the top of their respective sports.

“I work harder physically to be able to practice as long as I wanted to,” Mickelson explained in an interview with Golf magazine. His trimmed-down look and rippling forearms serve as a testament to his new regimen. “If I work a little harder, spend a little more time in the gym, eat well, practice hard, there’s no reason why I can’t put it all out there for 18 holes.”

As well as following a strict diet, which includes prolonged periods of fasting, spending more time practicing and in the gym, he has also worked hard on the mental side of the game, which he says includes ”the ability to quiet my mind and get rid of all the exterior noise.”

And there was certainly a lot of “exterior noise” at the PGA Championship this weekend. An increasingly well-oiled and rowdy crowd — sensing that they were witnessing an historic achievement — followed Mickelson on Sunday, eventually swarming him in a mad throng as he made his way to the final hole.

Mickelson was somehow able to shut out this wild scene and the immense pressure it placed on every shot. He would breathe deeply after every swing and try to block out the fans and re-focus on the task at hand. Instead of trying to make the perfect shot, his new strategy was to hit the fairways, reach the the greens in regulation and minimize the errors that have forever been  his downfall.

On this glorious weekend, everything fell into place. He seemed to finally understand that channelling the experience that comes that comes with 30 years on the PGA tour and simplifying his game would give him a better chance of victory.

There’s a lot less drama to this new Mickelson. And while it may be a bit boring to watch, his conservative approach and shot management are better suited to his age. And they certainly paid dividends.

It’s the same formula that propelled the then 43-year-old Tiger Woods to victory at the Masters in 2019. Woods, who always managed to out-duel and overshadow Mickelson until a car accident last year derailed his career, tweeted his respect and congratulations to his former rival.

On Sunday, Mickelson was basking in the moment. “It’s certainly one of the moments that I’ll cherish my entire life,” he said, an achievement made even more remarkable in light of the fact that he hadn’t posted a top-10 in a major in five years.

Asked whether his performance can be duplicated in tournaments going forward, Mickelson said he wasn’t so sure. But as long as he continues working hard and sticks to his new approach, he feels that his most recent victory won’t necessarily be his last.

“The point is that there’s no reason why I or anybody else can’t do it at a later age,” he said. “It just takes a little bit more work.”

As Mike Weir, 50, the Canadian Golf Legend Talks Changing His Approach to Life On and Off the Course