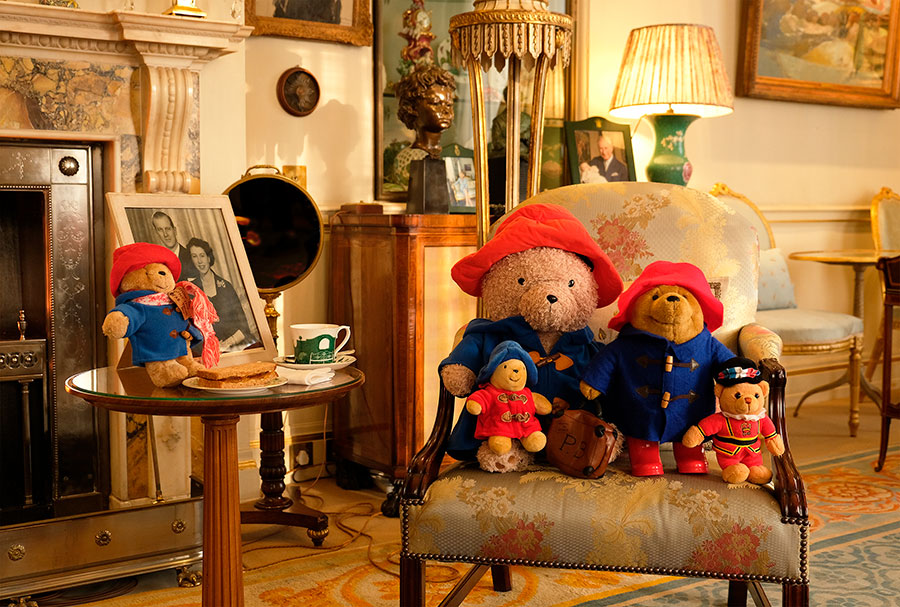 In one of the fun photos released by Buckingham Palace on Friday, a group of Paddington Bear toys cosy up next to a cup of tea and a marmalade sandwich in the Morning Room at Clarence House in London. Photo: Buckingham Palace via AP/Canadian Press

More than 1,000 Paddington Bears left outside royal residences by mourners in tribute to the late Queen will soon find new homes, but not before enjoying some pampering at Buckingham Palace.

Ahead of a teddy bears picnic next Thursday, which will see Camilla personally hand out the stuffed animals to kindergartners in partnership with Barnardo’s children services, the palace released a number of photos of the bears making themselves at home.

The teddies are seen sliding down an elegant staircase banister, exploring bookshelves and lounging on the velvet-covered chairs.

The Queen Consort will be joined at the special event next week by Paddington film cast members Hugh Bonneville and Madeleine Harris — who play Mr. Brown and Judy Brown — and daughter of Paddington author Michael Bond, Karen Jankel, for whom the original stories were written.

Since her passing in September, the teddy bears have become a touching symbol of the Queen, who appeared in a sketch alongside the animated bear during her Platinum Jubilee in June.

“Those involved in the project hope the teddy bears will be much loved for many years to come by children supported by Barnardo’s, whilst understanding the story behind the bears and how they came to be donated,” Buckingham Palace said in a statement.

Camilla, Queen Consort, Releases New Portrait With Paddington Bears Left as a Tribute to Queen Elizabeth; Toys to Be Donated to Charity

More than 1,000 Paddington Bear toys left in tribute to Queen Elizabeth have been donated to charity.

Many mourners who paid tribute to the late monarch following her death in September aged 96 left the cuddly tributes outside royal residences along with cards and flowers, and now Buckingham Palace have announced the bears will be handed over to Barnardo’s children’s service.

To accompany the announcement, a new photo was released of Camilla, the Queen Consort  — who took over as patron of the charity from the Queen in 2016 — with some of the toys at Clarence House on October 13, the 64th anniversary of the publication of the first Paddington book.

A press release noted: “The teddy bears will all be professionally cleaned and delivered in the coming weeks.”

Barnardo’s have welcomed the gesture.

Lynn Perry MBE, chief executive of the charity, said: “Her Majesty Queen Elizabeth II was Barnardo’s Patron for over 30 years, and we are honoured to be able to give homes to the teddies that people left in her memory. We promise to look after these bears who will be well-loved and bring joy to the children we support.

“We are incredibly grateful to Her Majesty The Queen Consort for her support in helping us to raise awareness of the needs of vulnerable children and young people in the U.K. so that we can continue to support them through our vital services.”

Paddington Bear was linked to the Queen after she appeared in a surprise TV sketch during her Platinum Jubilee, in which she enjoyed marmalade sandwiches with the beloved children’s character.

Prince William previously admitted seeing the bears had triggered a wave of grief.

He said: “It is the things you don’t expect that get to you. Paddington is a new addition but the corgis have been there for longer.”

As the Party Ends, Queen Elizabeth Says She Is “Humbled” by all the Support for Her Platinum Jubilee

The Coronation of King Charles and Camilla, Queen Consort, to Be Held Next May