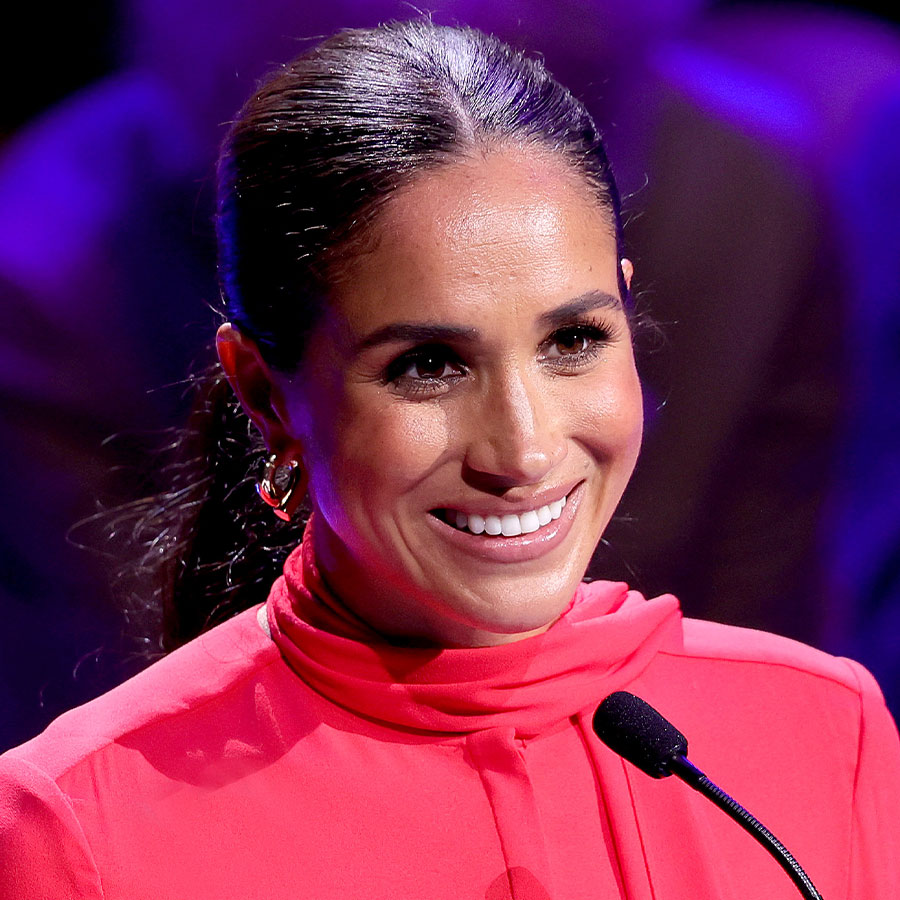 Meghan, Duchess of Sussex makes the keynote speech during the opening ceremony of the One Young World Summit 2022 at The Bridgewater Hall, England, Sept. 5, 2022. Photo: Chris Jackson/Getty Images

The guest on this week’s Spotify Archetypes with Meghan podcast was Canada’s very own Spouse of the Prime Minister, Sophie Grégoire Trudeau. That is the official title here, but that didn’t stop Meghan and U.S. and U.K. reports from dubbing her Canada’s First Lady. The broadcast was titled “Good Wife/Bad Wife, Good Mom/Bad Mom,” which the Duchess of Sussex described as a look at the roles of women at home, exploring how we can “break out of the limiting version of these molds society has carved out for us.”

That duality is different for women in the public eye, and especially for Meghan and Sophie, who are, despite their own prior career successes, now oft identified in public and the media primarily as “wife of” two very famous men, both in the spotlight and part of their nation’s narrative, going back to the moment they were born.

Meghan and Sophie became fast friends while the former was filming the USA Network hit series Suits in Toronto. Playful photos of the two in a CAFA photo booth from 2016 accompanied many reports on the podcast yesterday. Sophie, of course, was a television personality herself in Quebec, then later a yoga instructor, before her husband switched careers from teaching to politics. The Montrealers were friends also with another Canadian political dynastic offshoot, Ben and Jessica Mulroney, both originally from that city as well. And, of course, Jessica is close to Meghan, so the whole social circle.

On the podcast Meghan revealed she and Sophie had a pool day with their kids in Montecito, Calif., earlier this summer, describing it as a day of wine and sun, where they were “giddy as schoolgirls.” The two old pals spent the day with “wildly curly hair, swimsuits, loose linen and big belly laughs.” A nifty nugget of info that is likely to attach itself to the Sussex story for the long term — because of it is equal parts quirky and relatable — is that the hit at the pool on that kids’ and moms’ playdate were the blow-up pizza slice loungers (called lie-lows in the U.K.) Meghan says she bought on Amazon.

Onto the serious part of the conversation, Meghan said, “Sophie has become a dear friend and someone who I think is so emblematic of strength that comes from embracing your humanity, even in the face of all these family and home and public pressures.”

Sophie confides that she hates the protocol pronoun she is referred to in official life, which is “Madame.” Turns out that Sophie has been an ear for Meghan as she entered that formal world of international diplomatic relations, as well as motherhood. Meghan says, “I’ve gone to her over the years for advice. She knows what it feels like to be a Mom and a partner, and specifically a Mom and partner in the public eye — and also how crushing the guilt of expectations can become.”

Sophie counters with the idea that “The guilt we feel as mothers, or as women in general, is self-imposed. A little girl is not born feeling guilty,” calling it “completely unacceptable.”

Meghan then quotes “conscious parenting” expert Dr. Shefali Spari’s meditation on letting go of expectations. She is very on brand here, as in, very earnest, but it is touching, nonetheless. She really means it.

Meghan knows how to mix up little personal reveals in each episode, and we do learn more quotidian aspects of life in Montecito that Meghan cherishes after the couple left their roles as senior working royals. The big tidbit that made headlines swiftly was that their daughter, Lilibet, who turned one just this past June is now walking, so Meghan has two toddlers on her hands these days.

Meghan also shared their Montecito morning routine, which includes her making breakfast for the family (and their three dogs) and making a lunch box for Archie (presumably for nursery school?). She concluded the thought with gratitude for her life, saying she “bows down” to single mothers who deal with the morning scramble alone. “It is so hard being a mum.”

Also in the episode is actress Pamela Adlon, known for the series she wrote, directed and starred in called Better Things, based on her own adventures in single motherhood.

But the most surprising moment involves a cameo with Meghan’s own mom, who hasn’t been seen much since Archie’s christening in that famous snap alongside the Sussex three and the Queen and Prince Philip. Doria pops into frame while Meghan is taping, in a FaceTime call. Miraculously, it doesn’t feel contrived, and one of the textural elements of the podcast series thus far has been the little interruptions of life, with Harry walking through the room previously.

We hear Meghan pick up with a “Hey Mommy.” She explains that Doria gave her their secret handshake signal, something she calls “snap, scissors, chicken wing,” which Meghan made up when she was about eight. This interlude leads to a reflection from Meghan. “It just put me right back into the past. Thinking about my childhood, our little quirks together … and then, with this episode on my brain, it got me thinking about all the ways my mom supported me, how she took care of me and the house and herself … and how she just juggled so much.”

She calls motherhood “The most thankless, unpaid labor there is. There’s no union. There’s no lunch break. There’s nothing like that. At home, women just work really, really hard.” So much of it, she says, is “born out of expectations” and “the idea that we need to fit the exact cookie cutter shape the world wants to jam us into.”

Meghan Markle On Grieving for the Queen, and Other Revelations From Her ‘Variety’ Interview

As Meghan Marks Her 41st Birthday, ‘;Finding Freedom’ Author Omid Scobie Is Writing New Book About the Duke and Duchess of Sussex