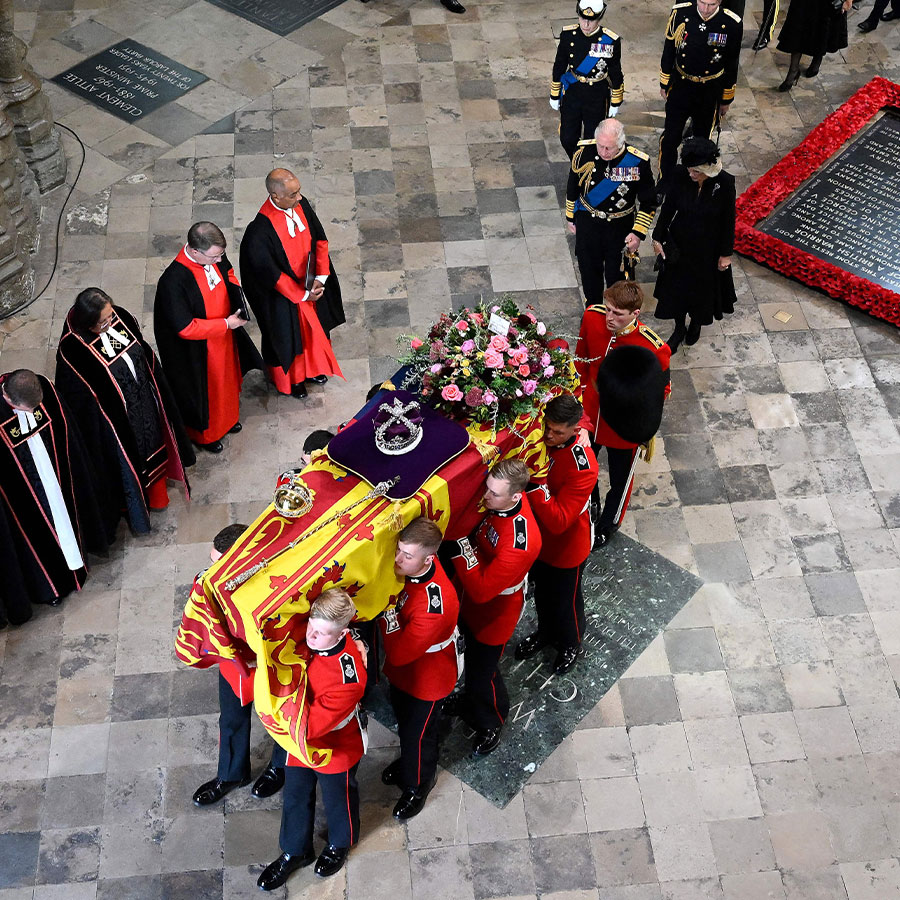 The coffin of Queen Elizabeth II is carried out of the Westminster Abbey during the state funeral service for the history-making monarch. Photo: Gareth Cattermole/POOL/AFP/Getty Images

In a rare display of public emotion, King Charles III shed tears during the singing of “God Save the King” at the funeral for his mother, Queen Elizabeth II — a ceremony rooted in royal tradition and symbolism.

The Queen’s life was celebrated this morning in Westminster Abbey, in front of her family and 2,000 official mourners including 500 heads of state and the heads of royal families around the world, leaders from Commonwealth countries, hundreds of thousands lining the streets and millions around the world.

At precisely 10:44 a.m. local time, the coffin left Westminster Hall, where the Queen had been lying in state for four days as Britons joined the now-legendary miles-long queue, waiting long hours in the cold to say goodbye to their beloved sovereign.

The outpouring of emotion in Britain this week has been unprecedented in magnitude and scope, making this funeral feel like a mass catharsis. No one does spectacle like the Brits, and the dazzling visual imagery is nestled within the bosom of tried and true tradition.

The funeral of Queen Elizabeth II marks the very end of an era, the loss of a figure who encapsulates almost all of our collective remembered history. The Queen was at once regal and maternal, a heady combination that felt at times like she kept the world spinning. Letting her go and moving on feels, quite simply, momentous.

The Queen’s coffin left Westminster Hall atop a gun carriage pulled by sailors of the Royal Navy. This tradition arose during Queen Victoria’s funeral when the harness on one of the horses pulling her gun carriage snapped, leading to a near disaster. Naval officers swooped in to save the day, and have performed this service at every state funeral since. She was followed by the King and his siblings (Princess Anne being the first female to ever walk in a royal funeral procession) and his sons.

As the Royal Family Twitter account noted, the bouquet atop the Queen’s casket held, at the request of the King, flowers from all the royal residences, “in shades of gold, pink and deep burgundy, with touches of white” and including  myrtle grown from a sprig in her wedding bouquet, rosemary and English oak.

The card in the bouquet of pink flowers was hard to read, but appeared (though unconfirmed) to be in King Charles’s distinctive handwriting, addressed to Her Majesty, saying: “In Loving and Devoted Memory.” Later, during the funeral ceremony, tears were spotted on the new monarch’s cheeks as “God Save the King” played.

The crown a top the coffin was the Queen’s coronation crown, while the orb next to it symbolized that her power came from God while the sceptre served as a symbol of her shepherding her subjects as well as her temporal power.

At the entrance to Westminster Abbey, the family procession was joined by spouses.

The King, accompanied by the Queen Consort, led the way behind the coffin — still bearing the Imperial State Crown, the orb and the sceptre — followed by, in birth order the other Queen’s children: the Princess Royal (and Vice Admiral Sir Timothy Laurence); the Duke of York and the Earl and Countess of Wessex.

The next generation followed, with the Prince and Princess of Wales joined by a surprise addition of Prince George and Princess Charlotte. The young royals, aged just nine and seven, respectively, are now number 2 and 3 in the line of succession. Their presence is a symbol of the continuity of the Crown.

Next came the Duke and Duchess of Sussex, followed by Peter Phillips and the Earl of Snowden (son of Princess Margaret), the Duke of Gloucester and Prince and Princess Michael of Kent. The procession was accompanied by a hymn known as “The Sentences,” which are lines of scripture set to music, and which have traditionally been sung at all British state funerals since the 18th century.

Ahead of the service, Dr. David Hoyle, the Dean of Westminster, told BBC News: “Right at the heart of this is a family funeral.”

The choice of Westminster Abbey allowed organizers to include as many dignitaries as possible. But it is important to remember, said Hoyle, that “The Abbey shaped her life,” as the Queen was both married there, in 1947, and it is where her coronation took place, in 1953. He said the service, a mix of pageantry, ritual and spiritual comfort, was designed to give the pent up collective grief over the passing of such a monumental historical figure “somewhere to go.”

At precisely 11 a.m. London time, the service began. It was preceded by 96 tollings of the Abbey’s tenor bell, one struck each minute leading up to the service to mark the Queen’s 96 years.

The seating arrangements for the family must have been tricky, indeed. The Queen’s children flanked the coffin, lead by the King at the head. The second segment of front row featured the Prince of Wales, Prince George, the Princess of Wales, Princess Charlotte, Peter Phillips and Zara and Mike Tindall.

In the row behind the King, the Duke and Duchess of Sussex were seated beside Princesses Beatrice and Eugenie and their spouses. But perhaps most surprising was to find Sarah, Duchess of York, the former wife of Prince Andrew, seated second row right behind Kate. What a comeback! In the age of Camilla, the divorced once “other woman” turned Queen Consort with the generosity and spirit of forgiveness of the Queen, anything is possible, except, perhaps, for Andrew’s own return to life as a working royal.

Music was played throughout by the Choir of Westminster Abbey and the Choir of the Chapel Royal, St. James’s Palace. Lessons were read by Patricia Scotland, Secretary General of Commonwealth Nations, and Liz Truss, the British Prime Minister, who was invited by the Queen to form a government just two days before her death. One poignant music choice was “The Lord is My Shepherd,” which was also played at the Queen’s wedding to Prince Philip.

The Archbishop of Canterbury, meanwhile, made reference to the Queen’s speech to the nation (and the world) in the dark early days of the pandemic, when she cited the wartime songbird of her youth, Vera Lynn and her lyrics with the sentiment “We’ll Meet Again.”

Following the playing of “Sleep, Dearie, Sleep” by the Queen’s Piper, Pipe Major Paul Burns, the Queen left Central London in procession for the last time through Wellington Arch, commissioned by George VI in 1825 to commemorate Britain’s victory in the Napoleonic Wars. The procession was led, at the Queen’s request, by members of the Royal Canadian Mounted Police — one of whom rode a top a horse named Elizabeth.

Princess Anne accompanied the casket from London, continuing the touching journey where she stayed by her mother’s side in transit all the way from Balmoral the day after her death. Upon arrival in Windsor, the hearse and procession, lead by the King’s Life Guards, made its way along the nearly five kilometres of Windsor’s Long Walk, where crowds were packed dozens deep to pay their respects.

The images outside Windsor Castle, 1,000 rooms and 1,000 years old, dating back to William the Conqueror, feature possibly even more awe-inspiring choreography than the images from Central London. Windsor Great Park offers the space to demonstrate the stagecraft of pomp and circumstance the British military so excels at.

A gun salute accompanied the hearse through the archway to the castle quadrangle, where the grown male members of the immediate Royal Family, as well as Princess Anne, reprised their procession from the top of the walk. At the main entrance to St. George’s Chapel, the pallbearers negotiated the tall staircase to enter the chapel for the service of committal.

Inside, the 800 mourners included the Royal Family and the royal household, the prime ministers and governors general of the Commonwealth Realms, European royalty (many of whom are related to the Windsors, being descended from Queen Victoria and Prince Albert), as well as staff from the Queen’s private estates.

The family once again paired up behind the coffin, with spouses joining, to bring the Queen up the aisle of the Chapel for the final time. Windsor Castle was very much the Queen’s home, and her favoured castle since childhood during the war; throughout most of her reign she used it at weekends, but she moved in full-time during the pandemic with Prince Philip.

The Crown Jewels were moved from the Queen’s coffin by a Bargemaster and a Sergeant at Arms handed them to David Conner, the Dean of Windsor, to place on the high altar. Special permissions need to be given for this: usually just the monarch, the Crown Jeweller and the Archbishop of Canterbury are allowed to touch the Crown Jewels.

At the end of the service, the King placed the royal standard of the regiment of the Grenadier Guards on top of the coffin. The Queen’s Lord Chamberlain broke his “white staff,” formally known as his Wand of Office, and placed it also on the coffin. Then, the coffin was lowered into the Royal Vault. The Queen’s Piper once again finished the service, performing “A Salute to Royal Fendersmith.”

The service of committal is the most solemn ritual of the Church of England, and usually takes place at the graveside. In the case of the Queen, she will rest beneath the chapel itself, a place in which she so often worshipped in life.

The service, in fact, was a massive geopolitical event. And politics of course are still at play. The only major leaders missing are from Russia and China. Russian President Putin was excluded because of his war on Ukraine; President Xi of China was invited but chose to send a deputy. The monarchy is politically neutral and, yet, yesterday Kate, Princess of Wales met with Olena Zelenskyy, wife of the Ukrainian president.

It was also a huge gathering of royal houses, with a rare appearance of Japan’s Emperor Hirohito (and a differently rare sighting of Princess Charlene of Monaco, who has only recently returned to the principality).

A final ceremony tonight at 7 p.m. London time (2 p.m. EDT) will allow the Royal Family to reclaim the Queen after her week of public viewing for a private burial, beside her husband, Prince Philip, her sister, Princess Margaret, the Queen Mother and her father, George VI, in the George VI memorial chapel. Her final resting place is also alongside 10 sovereigns, including Henry VIII and Charles I.

The End of An Era: The Incredible Life and Legacy of Her Majesty Queen Elizabeth II

A Life in Pictures: The Defining Moments of Queen Elizabeth II’s 70-Year Reign