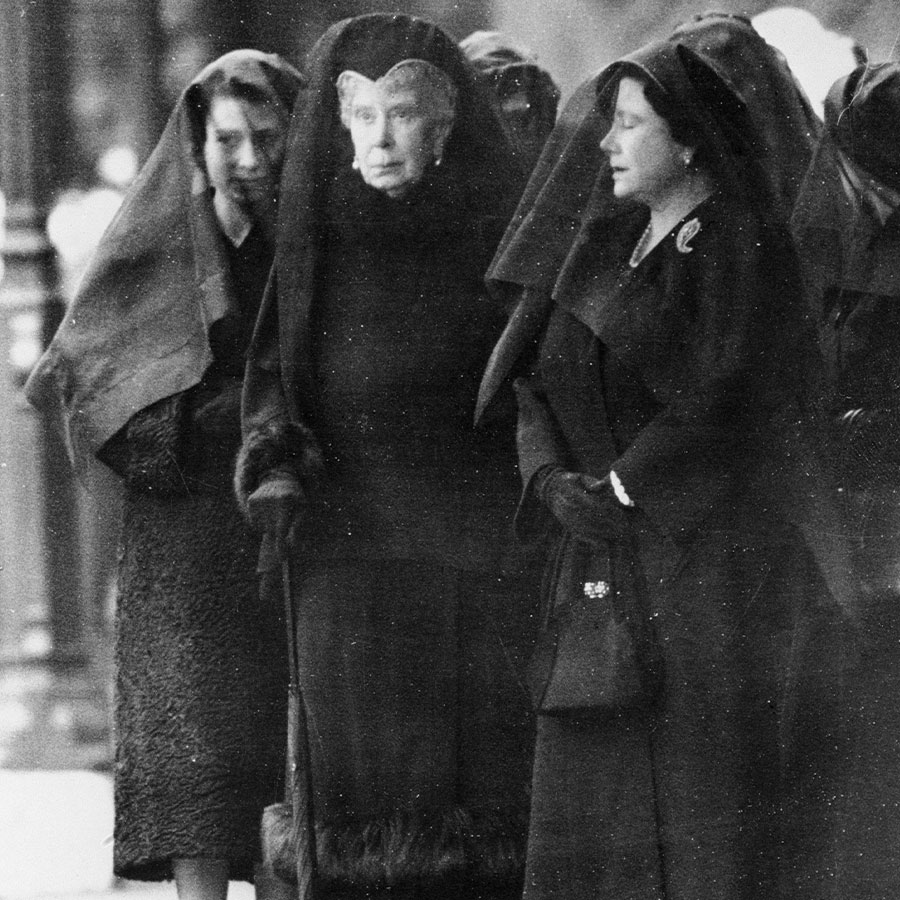 If royal brides set wedding dress trends, then the royal women will surely set the tone for modern mourning over the 10 days before the Queen is set to rest at St. George’s Chapel.

The dress code for the entire time is a strict black, in a tradition that goes back to Queen Victoria. Prior to Victoria’s time, the colour of mourning was always white. But upon the death of her beloved husband, Albert, in 1861, Victoria settled in to 40 solid years of mourning and a passionate commitment to all-black, preferably as matte as possible.

Pearls, then, became the chief adornment for the Victorian mourner as they were thought to represent tears. A beautiful sentiment.

Queen Elizabeth II herself favoured pearl jewellery for daily and mourning usage; she gifted, passed down or loaned many important pearl pieces to the women in her family. It is notable that Elizabeth herself wore her trademark pearls to the funeral of Diana, Princess of Wales, 25 years ago.

Catherine, Princess of Wales, set the modern standard for chic mourning attire at the funeral for Prince Philip in April 2021. Pictured in the back of a car en route to the COVID-era service restricted to just 30, her blue eyes shone underneath a black veil with netting, above a black mask. Around her neck was the four-strand pearl necklace loaned by the Queen, as well as Bahrain diamond and pearl drop earrings, also from the Queen’s collection. This was masterful royal dressing that sent all the right messages: sentimental jewellery worn in honour of the dearly departed.

Cut to the first major outing this past week, where the entirety of the female contingent of the Royal Family — from Camilla on down to distant second cousins — all arrived in head to toe black for the service at Westminster Hall to mark the beginning of the official lying in state for Queen Elizabeth. That everyone was wearing a hat goes without saying. Any church appearance by any royal at any time calls for a hat. This tradition, which has rather sadly gone by the wayside elsewhere, is something irrefutably associated with British royalty. It is expected that the women of the Royal Family will also wear black veils for the Queen’s actual funeral. It is a tradition, and Elizabeth wore a nearly opaque lace veil for the funeral of her father George VI — though today’s royal veils may be fashioned from more “modern” netting, akin to what Kate and Meghan wore Wednesday.

For the service at Westminster Hall on Wednesday, Kate wore a large-in-scale diamond and pearl leaf brooch, which, as Tatler points out, “once belonged to the Queen,” who wore it on her 73rd birthday in 1999 on tour in Seoul, South Korea. The pave diamond leaves are anchored by three large pearls.

Kate had previously worn this piece on somber occasions, such as at various First World War memorial services. She balanced the tribute with pearl drop earrings called the Collingwood earrings, which belonged to her late mother-in-law, Diana, who preceded her in the title of Princess of Wales.

Wearing these particular earrings just a day after her she and her husband had their titles elevated sent a clever and graceful nod of acknowledgement of service. Her outfit that day was a new coat dress, her signature style from one of her go-to designers, Catherine Walker.

For Meghan, Duchess of Sussex, royal funereal garb is a new experience. She did a great job of nailing both the black outfit (a Givenchy coat, which was sensibly a re-wear from a 2019 appearance at the Association of Commonwealth Universities) and the symbolic jewellery, choosing a pair of diamond and pearl studs that had been given her by the Queen on the occasion of their first joint engagement following her 2018 wedding to Harry.

Queen Consort Camilla also wore pearls to the Westminster Hall Lying in State service. But it was Princess Anne, whose devotion to her mother and steadfast accompaniment of her coffin on the long journey home, who wore the most sentimental jewellery. She wore the Grima Pearl Earrings, which she received from her parents prior to her 1992 wedding, and which she also wore to her father’s funeral.

Anne, who did not do military service herself, wore a royal blue military uniform, with formal white hat, sword and gloves. This is the Royal Naval ceremonial uniform; she was made admiral in 2012. She is also a general in the army and an air chief marshal in the RAF. The Earl of Wessex also did not serve, but holds the titles of commodore in chief of the Royal Fleet auxiliary and Honorary Air Commodore of the RAF.

The King wore a full day ceremonial uniform with the rank of field marshal as he proceeded behind his mother’s coffin on Wednesday. He carried a field marshal baton and wore ten medals, including ones representing the New Zealand Armed Forces and the Canadian Forces Decoration. We also saw the King in a kilt at the Lying in State in Edinburgh; it was the Prince Charles Edward Stuart tartan, reputedly his favourite.

In one of the few controversies to play out over the mourning period, Prince Andrew and Prince Harry — both military veterans who were stripped of their honorary military titles when they left (by order of the Queen, in Andrew’s case, and by choice in Harry’s) the ranks of senior working royals — will be wearing morning suits at the funeral. An exception was made, first for Andrew and then for Harry, to wear military dress to pay tribute to their Commander-in-Chief at the Vigils of the Princes that take place Friday night for the Queen’s children, and Saturday night for the Queen’s grandchildren.

A morning suit is a peculiarly British thing: only worn before 6 p.m., it can be grey or black, depending on the occasion (wedding, funeral, Royal Ascot), and includes a waistcoat, shirt, tie and trousers.

The coat is shaped in a “cut away” style, originally intended to make it easier to ride horses. It was Edward VIII, in 1936 — prior to his abdication — who brought the use of the morning coat into fashion. Before that time, the frock coat was the appropriate item for formal daytime occasions. As British GQ explains, there are many rules at play: “Under no circumstances must you be able to see any piece of shirt or tie between the bottom of the waistcoat and the top of the trousers.”

As we watch for what the Royal Family wears on Monday, we can be certain there will be no big surprises. Save for the uniform issue with the two now non-working royals, Andrew and Harry (about which Harry was notably gracious, issuing a statement saying his clothing was not important, he wanted to do as his grandmother wanted, and that the focus should remain on remembering and honouring her service), there will likely be no major surprises in the wardrobe area.

What we will see is everyone dressed to pay final tribute to the extraordinary life and reign of Queen Elizabeth II.

TIFF Offering Free Screening of ‘Elizabeth: A Portrait in Part(s)’ on the Day Before the Queen’s Funeral

The End of An Era: The Incredible Life and Legacy of Her Majesty Queen Elizabeth II, Who Died at 96