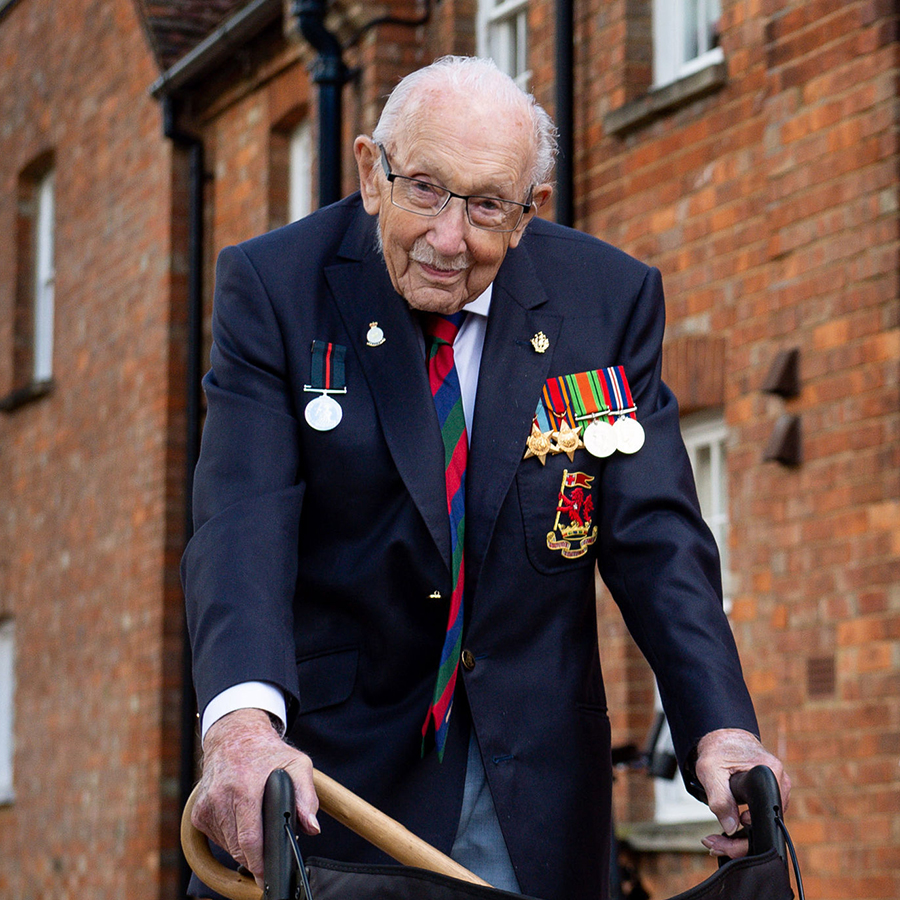 After a whirlwind year of fundraising, charity work and accolades, Captain Tom Moore is adding one more award to his name: one of GQ's Men of the Year. Photo: Jacob King/PA Images/Getty Images

If anyone has ever epitomized the idea of “what a difference a year makes,” it’s Captain Sir Thomas Moore.

Twelve months ago, the man known affectionately the world over as Captain Tom was an anonymous, optimistic 99-year-old British Second World War veteran living quietly with his family in Bedfordshire, England.

But in April 2020, with the COVID-19 pandemic in full swing, the big-hearted captain decided to raise £1,000 for England’s National Health Service (NHS) workers by walking 100 laps of his Bedfordshire garden ahead of his centenary at the end of the month. His effort, of course, gained worldwide attention and by the time his birthday came around he’d raised more than £32 million (over $54 million Canadian) and inspired countless others to take up their own charity initiatives.

And now, to top off a year that included turning 100, becoming a global celebrity and the oldest person to top the U.K. music charts (with a charity recording of the Rodgers and Hammerstein tune “You’ll Never Walk Alone” from Carousel), releasing an autobiography and being knighted by the Queen — as well as starting the Captain Tom Foundation to help people facing loneliness and bereavement during the pandemic — Captain Tom has one more accolade to add: he’s a GQ cover star.

Yes, the centenarian graces the cover of the men’s magazine’s Jan./Feb. 2021 issue in a Hugo Boss suit while draped in the Union Jack flag as one of its Men of the Year — specifically, the “Inspiration of the Year” — in recognition of “his incredible fundraising feat.”

And even this honour brings with it a new record — Captain Tom is now the oldest person ever featured on the cover of GQ magazine. In the accompanying story, when advised of this record, Captain Tom exclaims, “Well, that’s something special, isn’t it And maybe next year, I’ll be the oldest again!”

The story goes on to tell how Captain Tom has dealt with his fame, including the overwhelming media requests — his daughter, Hannah, estimates her father has done 700 interviews in six months — and his eternal optimism, epitomized by his now famous catchphrase, “Tomorrow will be a good day.”

“Negative thoughts don’t seem to be part of me,” Captain Tom says in the piece. “I always think of the beneficial things.”

And it’s clear that he wants to ensure that his hard work will continue to benefit others. He notes, in the story, that his Captain Tom Foundation is, in part, rooted in his own experience caring for his second wife as she battled dementia. He recalls that he’d see other people at her care home who didn’t have anyone to visit them, and contemplating how “soul destroying” that loneliness must have been.

So, as he’s done his whole life — be it during the Second World War, a global pandemic or, now, the scourge of isolation faced by so many older people — Captain Tom is stepping in and walking the walk for those who can’t do it themselves.

And that makes him an inspiration in any year.