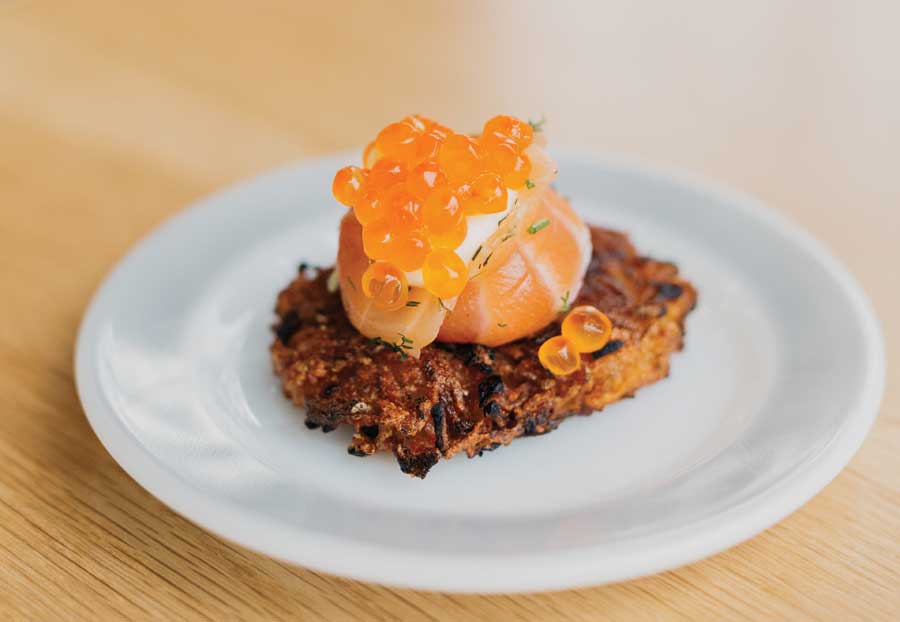 Chef Anthony Rose, known as the “king of comfort food,”  partnered with food writer Chris Johns to create The Last Schmaltz: A Very Serious Cookbook (2018) in which storytelling and cooking come together in delicious harmony.

Here, for Hanukkah, Johns shares one of his favourite recipes from the book: Schmaltz Latkes.

The Backstory (from Johns)

“As far as I’m concerned, Anthony’s latkes are the finest in all the land,” opines Johns. “Ridiculously crisp and tender, they appear utterly simple but are the result of a few clever tricks that add up to something exceptionally delicious. Anthony “sweats” the onion with salt for a few minutes to remove the extra moisture and rests the potato mixture after forming to let the flavours mingle, but the true genius of his recipe is the generous use of rendered chicken fat, schmaltz, to fry them in. Anthony serves them with his mother’s delicious applesauce but they’d make an excellent vehicle for chopped liver or lemon dill gravlax, as well.”

Serves 4 to 6
You can fry your latkes in oil or butter or whatever you want. My festival of lights includes schmaltz, the generously delicious rendered fat from chicken skins. Schmaltz adds flavour, depth and overall intensity to an already scrumptious dish. You can serve this with my mom’s applesauce recipe or with smoked salmon and caviar on top, which is next level.

OR
Smoked salmon and caviar, for serving

First start the latkes. Peel and slice your onion very thinly, then season with ½ tbsp salt and let sit for 20 to 30 minutes to get all the juices out.

As the onions sit, you can make the applesauce. Peel, core and cut your apples into large chunks. Place the apples in a large pot with ½ cup water, the cinnamon sticks, sugar and salt. Stir to combine, and bring to a simmer over medium heat. Cook for 20 minutes or until the apples start to break down, stirring occasionally. Once the apples are soft, remove the pot from the heat.
Let the apples cool, then remove and discard the cinnamon sticks. If you like, mash the apples with a potato masher for a smoother consistency. Check for seasoning and add extra cinnamon if desired. You can make this ahead and then reheat to serve over your latkes or serve at room temperature.

Return to the latkes. When your onions are almost ready, wash your potatoes and grate them on the fine side of a box grater, then place the potatoes and their juices in a large bowl and mix in the onions. The acid in the onion juice will stop the potatoes from oxidizing too quickly.

Add ½ tbsp salt and the pepper, matzoh meal, flour, egg and egg yolk, and stir to combine. Let the dough hang out for 5 minutes.

Weigh the latkes into 2 oz balls or use an ice-cream scoop that will make the size that you want. Firmly squeeze all of the juice out of the latkes, form back into balls and set aside on a clean dish towel to dry a bit.

Gently warm your schmaltz in a large pan over medium heat. Add three to five latke balls to your pan, depending on the pan size, and fry for 1 minute. Don’t overcrowd the pan!

Press the latkes down with a spatula and they’ll naturally become more of a patty shape.

Let them fry until they’re a beautiful golden brown, about 3 to 4 minutes per side. Remove the latkes from the fat and put aside on a plate lined with paper towel to absorb any excess fat. Season with more salt and serve with sour cream and applesauce on the side or with smoked salmon, caviar and sour cream on top.

NOTE: If you happen to be making these at Passover, you can omit the flour.