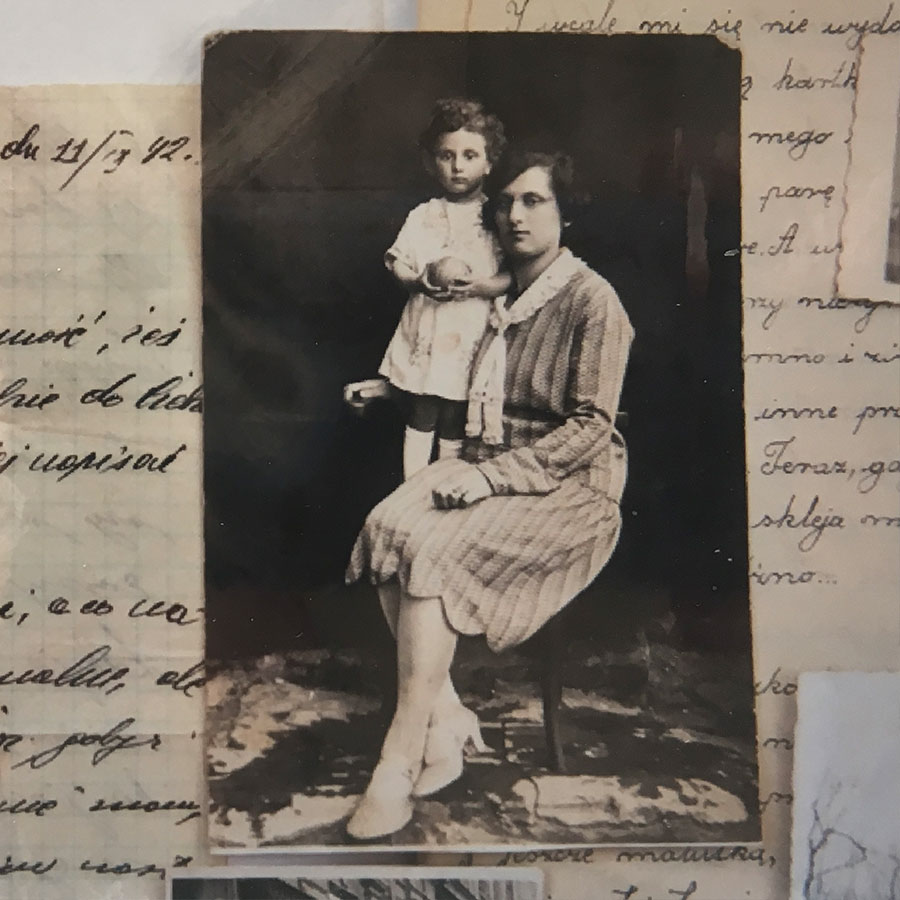 Molly Applebaum at 4 years old, with her mother Sarah Weissenberg, in approximately 1934, with letters from the 1940s in the background. Photo: Courtesy of Sharon Wrock

Albums seldom arrive with backstories as incredible or intense as the saga behind Silent Tears: The Last Yiddish Tango, premiering via two concerts at Ottawa’s National Arts Centre Jan. 24 and Toronto’s Heliconian Hall Jan. 25 in honour of International Holocaust Remembrance Day on Jan. 27.

The nine poignant, mesmerizing songs on Silent Tears are based on two astonishing sources, both singularly documenting the horrors of the Second World War. The first is the memoir Buried Words: The Diary of Molly Applebaum, begun when 13-year-old Applebaum, now in her 90s, was confined by day for nearly two years with her cousin Helen to a box buried underground on a farm in rural Poland to avoid Nazi detection. She finished it some 50 years later, in the 1990s, in her adopted home of Toronto.

The second source for the album is The Collective Poems, a book issued in 1995 and featuring wartime recollections of some 15 Holocaust survivors then living at Toronto’s Baycrest Centre for Geriatric Care. Their memories — like Applebaum’s, incomprehensibly awful — were shaped into prose by social worker Dr. Paula David, who recorded and transcribed survivor tales from therapy sessions she led.

Producer, journalist, and album lynchpin Daniel Rosenberg first heard about Molly Applebaum’s story in October 2018 at a Toronto conference about sexual violence during the Holocaust, where Dr. David gave a talk.

“Paula invited another project I produced called Yiddish Glory — which miraculously was nominated for a Grammy award — to perform at Camp Naivelt near Brampton,” Rosenberg, 55, says during a recent interview. “After the concert, she showed me the book of poems by Holocaust survivors [compiled] at the Baycrest Centre, and that was the beginning of our collaboration.”

With those heartrending stories in hand, Rosenberg approached Toronto’s acclaimed and insanely eclectic Payadora Tango Ensemble with the idea of setting them to music.  But not just any music: specifically, music inspired by — and recreating the sound of — Polish tango circa the 1930s.

As Polish-born, Israeli-based singer and Silent Tears contributor Olga Avigail Mieleszczuk explains in the album’s liner notes, “During the interwar period (1918-1939), Warsaw became the European capital of tango, and the world capital of Yiddish tango [with] more than 3,000 tangos written … most composed by Polish Jews.”

“We created this album in the style of Polish tangos from the 1930s because the women whose stories we are retelling all grew up in Poland during this period,” Rosenberg says. “Sadly, they never got to dance to the popular music of that era as their childhoods were spent on the run, in hiding, and in concentration camps.”

Though all of Dr. David’s clients at Baycrest have since died, it’s clear that she is deeply moved by the Silent Tears project and by hearing their voices recreated in this way. She will be speaking at its Toronto premiere.

“Originally, I recorded the conversations for me because I don’t speak Yiddish — or Polish or Hungarian, the mother tongues of these survivors — which allowed me to process what they were saying,” says Dr. David, 73 and now retired. “Plus, these were very heavy stories coming out. The poetry project wasn’t the plan, but it happened serendipitously.”

She continues: “These poems” — which are collective, threading together multiple people’s stories into one thematic narrative about topics such as hunger — “are so resonant. They are the voices of immigrants trying to find words for something there are no words for and doing it in a new language.

“For the album, Daniel had the words translated back into Yiddish, and when I first heard it, I was blown away and moved to tears. There is some divine justice to all of this and it’s incredibly powerful.”

The results are astounding, both musically and conceptually. But the process was no cakewalk for the musicians tasked with writing original music or re-arranging and recording music originally written by composer Artur Gold, who was killed in the Treblinka death camp in his native Poland in 1943.

“The topics were so troubling, so harrowing,” says Payadora violinist and vocalist Rebekah Wolkstein, 40, who composed four of the album’s nine tracks and who cites Grammy-nominated bandmate, producer, and arranger Drew Jurecka as especially pivotal to the project.

“For example, the song ‘A Victim of Mengele’ I sat on for months,” Wolkstein says. “I didn’t want to have to think about the topic. As well, with that one, I felt the Polish tango sound wasn’t right. The subject matter was just too dark. I wanted to go for a more modern Argentine tango sound, which Dan was open to. That allowed me to say what I wanted to say with the song.

“As a composer, I studied how Brahms, Haydn and others found ways to convey nearly every human emotion in their music,” Wolkstein continues. “For songs like ‘Silent Tears’ and others on this album, I had to find a new palette to work from to convey ideas about sexual violence and childhood separation. It was a very different experience.”

Adds Rosenberg, “Today, as we see the horrors of the war unfolding in Ukraine with Russia’s invasion, I can’t help but think about what children trapped there are going through. We are seeing images of parents sending their kids to live with strangers to get them away from the fighting, images that reminded me of what Molly Applebaum went through after her mother Sara, eighty-plus years ago, sent her to that farm in Dąbrowa, Poland to where she thought Molly might be safe, away from the fighting.”

When asked who she anticipates will attend the Ottawa and Toronto premieres of Silent Tears — which, at the risk of stating the obvious, explores powerful and potentially triggering themes — Wolkstein says, “The Jewish population will be interested to hear new music and new arrangements telling their history. But I hope the broader public will also be interested.

“This really is a universal story about what happens when we let xenophobia and prejudice take over in the world.”

Editor’s Note: Buried Words: The Diary of Molly Applebaum is one of multiple titles published in the Azrieli Foundation’s series of Holocaust Survivor Memoirs Program. More can be found here. They are, in Daniel Rosenberg’s words, “life-changing.”

Saxony: A Cultural Gem in East Germany Where the Scars of the Holocaust Are Never Forgotten