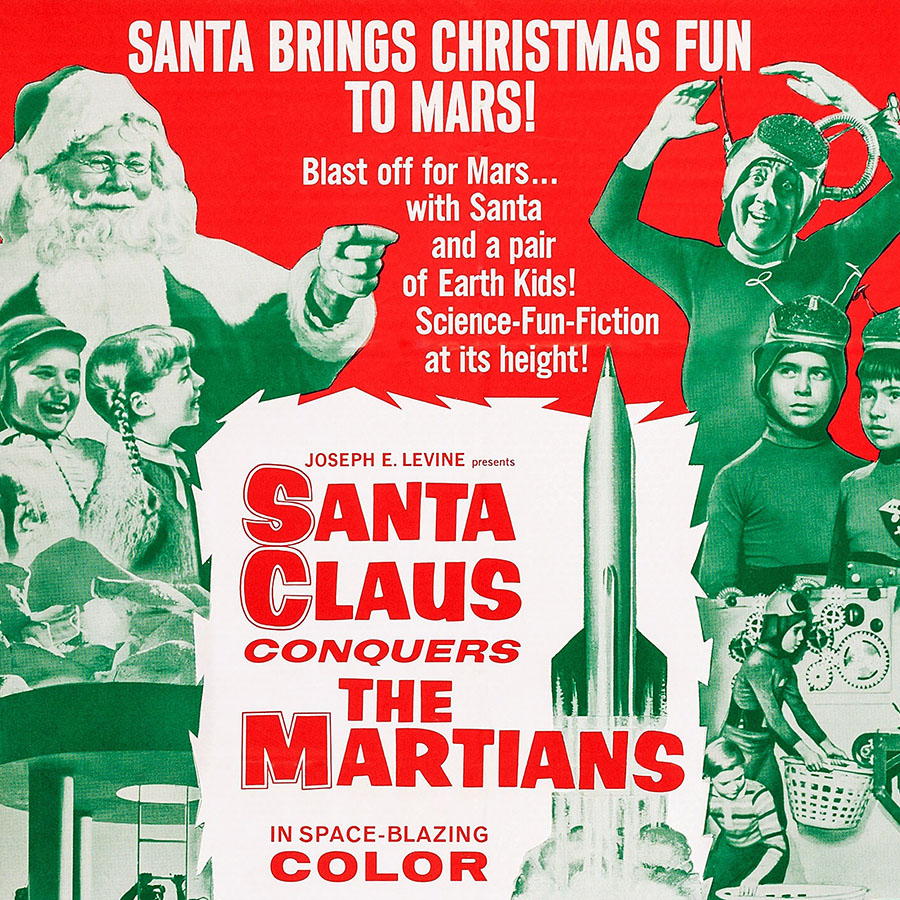 Holiday movies are right up there with decorating the tree, wrapping presents and singing carols, as seasonal traditions that just scream “Christmas!” And everyone has a favourite Christmas flick that they watch to get into the holiday spirit — from It’s a Wonderful Life to Alastair Sim’s classic Scrooge to the beloved stop motion TV movie Rudolph the Red-Nosed Reindeer, Home Alone or, yes, even Die Hard.

But what about those Christmas flicks that are more apt to make you scream “Bah humbug!”? You know, the ones that stray a little too far out of the box and see Santa encounter aliens, or fall prey to cat allergies, or go on a murderous Zamboni rampage (yes, it happened).

So since they’re real, and they’re out there, we’ve compiled a list of five terrible Christmas movies that you won’t believe are actually real.

What’s the story?: In the film, the ruler of the Red Planet has his Martian minions kidnap Santa in a bid to bolster the sprits of Mars’ kids — who’ve become couch potatoes who watch too much TV. Makes sense, right? Oh, and the Martians also kidnap two Earth children.

On top of it, Santa doesn’t conquer the Martians as much as he gets along with them and does what they want until everything works out in the end. Spoiler alert.

Fun fact though, this film is reportedly the first movie ever to depict Mrs. Claus.

Who’s in it?: Singer and actress Pia Zadora, eight-years-old at the time, plays one of the kidnapped children. As well, Ned Wertimer, who played the doorman Ralph on The Jeffersons, also co-stars.

Naughty or Nice?: The film was universally panned but caught traction in later years as a cult “so bad it’s good” flick. You can see the trailer here: What’s the story?: The brother of the holiday-themed serial killer in the first film in the franchise is now the deranged killer in this film. Nice family.

In this instalment, Ricky, brother of dead murderer Billy, goes on a killing spree after the death of his foster father and an encounter with his girlfriend’s ex. He eventually kills a whack of people, including a mob boss that he stabs with an umbrella — a scene that earned some camp fame online — which you can see below. Also, a hilarious note on Wikipedia reveals that this 88 minute film contains “40 minutes of archive footage from the original film.” That’s almost half the movie!

Who’s in it?: No one who gained bigger fame elsewhere.

Naughty or Nice?: Very naughty. The film, however, has a sequel – Silent Night, Deadly Night 3: Better Watch Out! What’s the story?: It revolves around a creepy dude who’s not above murdering people who come between himself and things that he wants. In this case, he wants Raven — a B-movie actress whom he has, lets just say, an unhealthy obsession with. Essentially he stalks her and kills anyone he feels is getting too close to her.

So what makes this a holiday movie? Well, our naughty neighbour dresses as Santa to murder people with a “claw.” Because, as we all know, serial killers tend to dress in bright, easily identifiable costumes and kill their victims with the most pointless, time-consuming weapon possible. Also, for some reason the titular claw isn’t featured in the artwork for the movie above.

Who’s in it?: Canadian actress Debbie Rochon, who you may remember from such films as Play-mate of the Apes, Corpses Are Forever, Demon Divas and the Lanes of Damnation, and Killer Rack, about a woman whose surgically-enhanced breasts go on a killing spree. Really.

Naughty or Nice?: He dresses as Santa and kills people with a claw. So not nice.

BONUS: There’s actually another holiday movie called Santa Claws, from 2014, that’s a family film about Santa being allergic to cats that a child — who clearly never heard of milk and cookies — leaves out for him. Anyway, Santa has an allergy attack that’s so bad he can’t continue delivering presents. So who do you think takes over Santa’s duties that night? The kid, right? Wrong. The cats. Yes — the cats. And we aren’t talking anthropomorphic cats like in the musical Cats. We’re talking actual cats. In the sleigh. Flying around the world delivering presents. With a 20 per cent rating on Rotten Tomatoes, it looks like this feline film landed in the litter box. What’s the story?: Get this — Santa is actually a demon who lost a curling match to an angel and the punishment was that he had to deliver presents for 1000 years. But it’s 2005 and he’s free from his gift-giving duties so he travels via sleigh and his hell-deer — yes, you read that right, hell-deer — to some town where he starts killing everyone in sight, tossing exploding presents and taking a murderous joyride on a Zamboni.

Naughty or Nice?: Filmed in Alberta and featuring some cool Canuck stars, a Zamboni massacre and a heavenly curling battle, it’s hard not to consider this perhaps the most Canadian of holiday horror comedies ever made. We’re not ready to put it on the nice list just yet, but at 42 per cent on Rotten Tomatoes that’s better than most other films on this list. Check out the trailer below: What’s the story?: First of all Hercules is a dog, not the Greek hero, which already makes this film infinitely less interesting. He, however, is no ordinary dog. Hercules is Santa’s magical dog helper, who compiles his naughty and nice list. Yes, a dog is responsible for the list that takes Santa around the world in a night and that keeps the elves working year around to make toys. It’s a wonder all the kids don’t get chew toys under the tree.

Anyway, Hercules the dog meets Max the annoying and troublesome orphan and brings him to the North Pole to plead his case to be included on the “nice” list before a court tribunal that includes Santa and the elves. Oh, did we not mention that Hercules the dog is also a lawyer? Does that make him “Puppy” Mason? Marcia Bark? Okay, we’ll stop.

So there’s a court case and then some other wacky antics take place, which IMDB calls “comical” and “hysterical.”

Naughty or Nice?: At 31 per cent on Rotten Tomatoes, not even Hercules is a cunning enough attorney to land this on the nice list.

A version of this article was published in 2018.

Nostalgia: A Tale of Christmas Past at Eaton’s Toyland