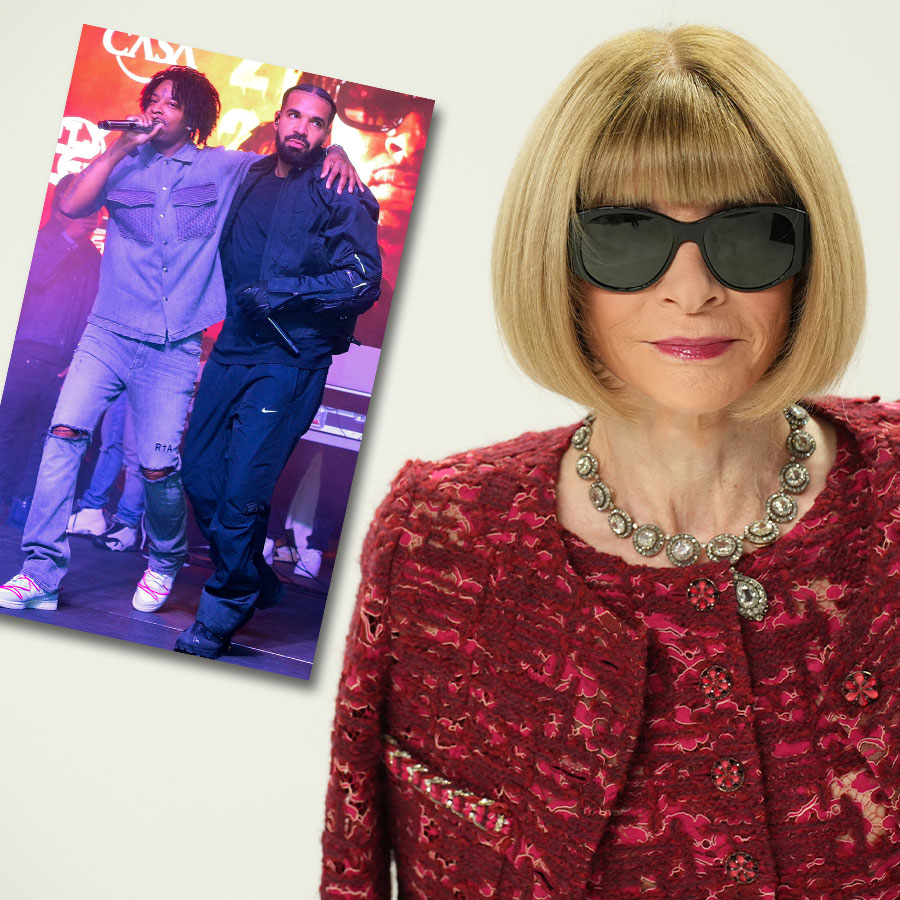 A lot has been made in recent years about the battle between digital and print media, and this week saw a symbolic showdown in that arena between rappers Drake and 21 Savage and 73-year-old legendary Vogue editor-in-chief Anna Wintour.

And the irony about the showdown is that, in promoting their new album, Her Loss, the rappers themselves are taking the “L’s” so far in a battle over the use of a fake Vogue magazine cover to drum up press for the disc.

Condé Nast, the parent company of Vogue, recently announced a lawsuit against both the Canadian rapper and 21 Savage after the pair printed a fake issue of Vogue magazine with their likenesses on the cover as well as what Variety called “a photoshopped collage of Drake posing with a young Vogue editor-in-chief Anna Wintour.” Condé Nast also contends that the rappers disseminated actual copies of the fake issue, as well as posters featuring the supposed Vogue cover, in major North American cities.

In a since deleted Instagram post, Drake himself shared an image of the fake Vogue cover with the caption, “Me and my brother on newsstands tomorrow!! Thanks @voguemagazine and Anna Wintour for the love and support on this historic moment. Her Loss Nov 4th.”

Drake shared that Instagram post on Oct. 30, sowing confusion among some about whether he and 21 Savage were on the cover of Vogue’s November issue. That, arguably, took some attention away from the actual cover subject, British actress and screenwriter Michaela Coel, whose critically acclaimed HBO series I May Destroy You earned her an Emmy for Outstanding Writing for a Limited or Anthology Series or Movie in 2021 — making her the first Black woman to take home the honour.

In fact, Drake and 21 Savage released fake versions of themselves doing other media appearances as well, including on Saturday Night Live and The Howard Stern Show. But it’s the Vogue cover that could cost them.

Condé Nast is suing the rappers for US$4 million, which, according to Variety, is “triple the defendants’ profits from their album and ‘counterfeit’ magazine,” for, as the company alleged in its complaint, a PR campaign “built entirely on the use of the Vogue marks and the premise that Drake and 21 Savage would be featured on the cover of Vogue’s next issue.”

The lawsuit also demands that all images of the Vogue cover be removed from the rappers’ respective social media accounts, which appears to have already taken place, and specifies that Wintour had no involvement in the PR stunt.

Though the crazy thing is that thanks to new Twitter owner Elon Musk’s blunder of allowing users of the site to pay US$8 for a blue verification check mark without having to verify their identity — leading to a slew of fake “verified” accounts for everyone from former U.S. presidents to Pepsi — Drake and 21 Savage could have literally paid eight bucks to start a fake “verified” Vogue Twitter account and had them tweet whatever they wanted about the album.

Instead of splitting the Twitter verification cost of US$4 each, they may be forking over US$4 million if Condé Nast gets its way. Later in the week, a judge granted Condé Nast a temporary restraining order against the rappers, meaning they had to pull all images of the Vogue cover from any promotions as well as “refrain from using editor-in-chief Anna Wintour’s ‘name, image of likeness,’” according to iHeartRadio.

It’s also notable that, in order to build buzz for their release, two of the hottest, Grammy-winning rappers in the world impersonated a legacy print media brand — including pretending they had the blessing of its 73-year-old editor — rather than, say, a leading pop culture website.

Evidently there’s still plenty of clout in those pages of ink and paper, even in a digital age of page views and streaming numbers.

Meanwhile, the lawsuit against Her Loss moves forward. Though in this scenario, it ultimately may wind up Drake and Savage 21’s loss and her — that is, Anna Wintour’s and Vogue’s — gain.

Anna Wintour Turns 71: 7 Style Tips You Can Learn From the Vogue Editor

Drake vs. the Beatles: The Rapper’s New Tattoo Sets Off a Debate Over Who Is Best