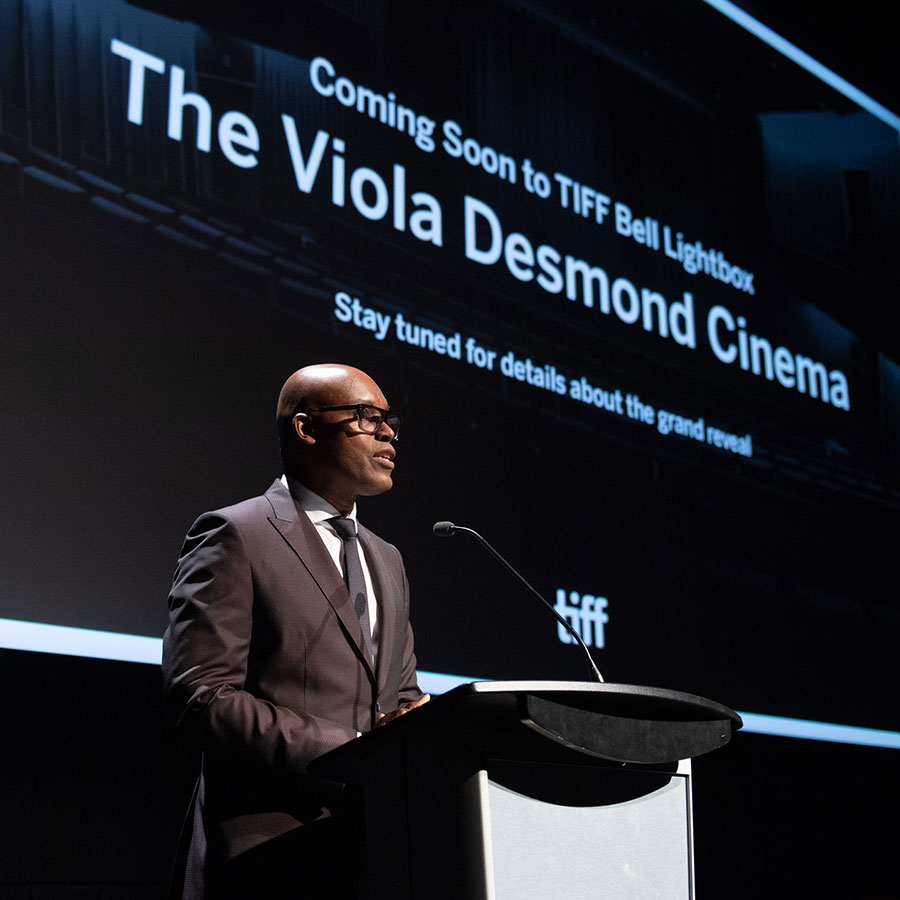 TIFF CEO Cameron Bailey speaks at the announcement of the renaming of Cinema 1 at the TIFF Bell Lightbox as the Viola Desmond Cinema on Nov. 8, 2022. The date is known as Viola Desmond Day, commemorating the late civil rights activist's stand against a racist seating policy in a Nova Scotia theatre in 1946. Photo: George Pimentel

In a fitting tribute to a Canadian icon, the Toronto International Film Festival announced on Tuesday evening that they would rename the biggest theatre at the TIFF Bell Lightbox the Viola Desmond Cinema.

The announcement came on Viola Desmond Day (Nov. 8), which commemorates the anniversary of the day in 1946 when the then 32-year-old Halifax-born entrepreneur stopped in New Glasgow, N.S., during a business trip to have her car serviced. Desmond, of Black Nova Scotian descent, decided to take in a film at the local Roseland Theatre, while waiting for the repairs, but was asked to move from the floor seat she’d chosen near the front of the theatre and sit in the balcony, where Black patrons were permitted.

Desmond refused to move and was arrested, spending the night in jail and eventually convicted of a tax offence. Though she died in 1965 at age 50, Desmond’s defiance of racist policies went on to become a symbol of anti-racism activism in Canada, with many drawing comparisons between her bravery and that of Rosa Parks’ refusal to move to the back of a bus in Montgomery, Ala., nine years later.

Wanda Robson, Desmond’s sister and a civil rights activist in her own right, championed her sister’s bravery and helped ensure that her story became widely known in Canada, including securing Desmond Canada’s first-ever posthumous free pardon in 2010. In 2018, Desmond became the first person of colour and first non-royal woman to appear on a Canadian bank note when her image appeared on the $10 bill. Robson died in February of this year at age 95.

“I can never forget that Viola Desmond’s act of resistance to racism in Canada took place in a movie theatre,” Cameron Bailey, TIFF CEO, said. “By launching the Viola Desmond campaign through our Every Story Fund, TIFF will work with donors and community partners to make our own theatres more inclusive and welcoming, and to increase our support for Black women screen creators. I believe the communion that happens in a movie theatre belongs to everyone. This initiative is our way of growing that connection as we honour the legacy of Desmond and her sister Wanda Robson, who worked for years to bring Desmond’s story to us all.”

In addition to naming its biggest cinema after Desmond, TIFF announced a pledge “to raise $2 million over five years to showcase and support Black women creators, enhance programming developed in collaboration with community partners for Black audiences, and to continue amplifying Viola and Wanda’s stories.”

The families of both Desmond and Robson were on hand at the TIFF Bell Lightbox for yesterday’s announcement, which also included a screening of When Morning Comes, the feature film debut from filmmaker Kelly Fyffe-Marshall, as well as a panel conversation “about legacy and the future of Black creators in the industry.”

As well, an exhibit, Viola Desmond Day: Art Activations by Black Artists’ Networks in Dialogue (BAND) and Vintage Black Canada — featuring artwork and photography highlighting the stories and sacrifices of Black families in Canada — opened at the event and will be available to visitors in the TIFF Bell Lightbox Atrium through Nov. 27. Click here for more information.

While the new Viola Desmond Cinema won’t be unveiled until next year, TIFF has already installed two seats at the front of the theatre in honour of Desmond and Robson.

Remembering Nova Scotian Viola Desmond, 75 Years After She Took a Seat to Make a Stand Against Racial Segregation

Tired of Giving In: How the Actions of Rosa Parks and Viola Desmond Still Resonate Today