Bryan Adams Turns 63: Talking His New Clothing Collab, Classic Tunes and Why This Might Be “My Most Productive Time Ever” 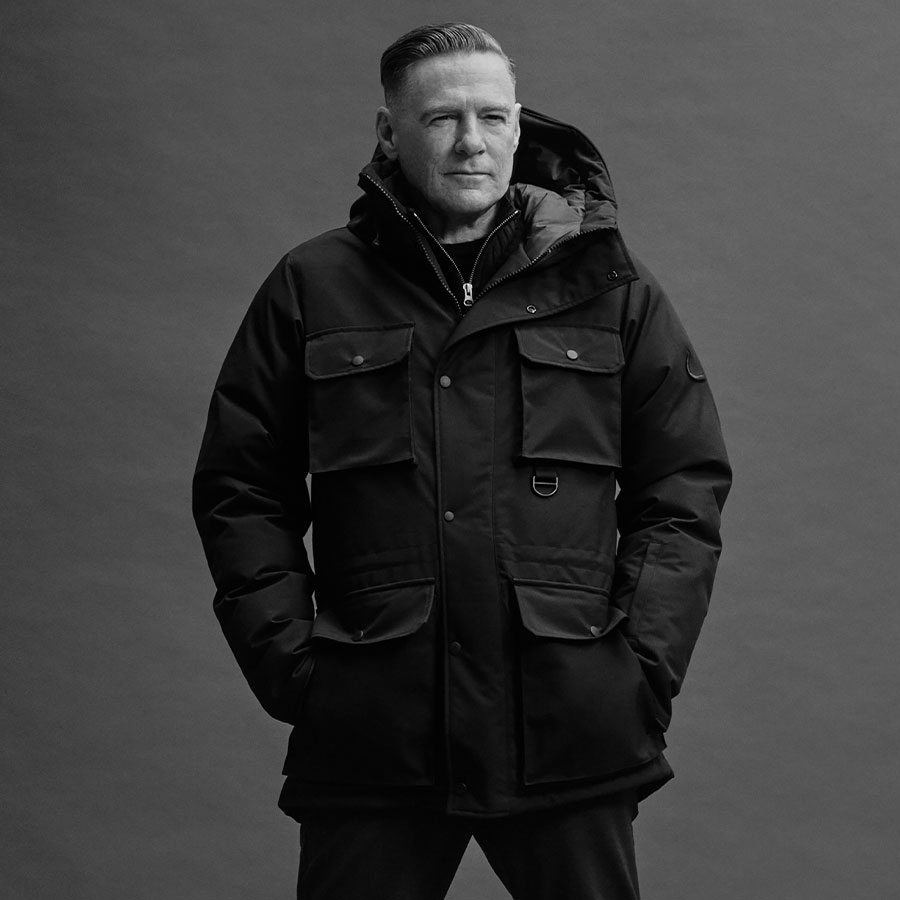 With four news albums, a cross-Canada tour and a new clothing collab with Wuxly — including the jacket above — Bryan Adams is busier than ever. Photo: Jay Clark CNW Group/Wuxly

Bryan Adams, who turns 63 on Nov. 5, has had an incredibly busy year. Most recently, he released a music video for his song “Kick Ass” featuring an introductory monologue by legendary Monty Python comedian John Cleese in mid-October, followed by a music video for his new festive tune, “Let’s Get Christmas Going,” this week.

But that’s just the tip of the iceberg in 2022 for Adams, who is currently on tour and, in fact, playing Saskatoon on his birthday.

The legendary Canadian rocker recently spoke to Zoomer about his busy year, re-recording his classic tunes, launching a clothing line and why he hopes someone in Saskatoon can light him a bonfire for his birthday. We revisit that story, from early October, below.

Saskatoon is going to be lit. Literally. That’s because, on Nov. 5 — the day he turns 63 — Bryan Adams touches down for a stop on his So Happy It Hurts North American tour. “I think everyone forgot that it was my birthday,” the legendary Canadian rocker says of performing that day during a recent Zoom interview.

“We’ll have a party. I like to have a bonfire on my birthday,” he adds of the date that also happens to be Guy Fawkes Day. Could his middle name Guy possibly be a coincidence? “Hopefully I’ll find someone somewhere that’ll be able to light a fire for me.”

Despite the passage of time, this year “could be my most productive time ever” Adams admits because, in 2022 alone, he’s released four albums — his 15th studio album, So Happy It Hurts, the soundtrack to Pretty Woman: The Musical, for which he and songwriting partner Jim Vallance, 70, wrote the music, and Classic and Classic Pt. II, which saw him re-record songs from his immense back catalogue, including “Summer of ’69,” “(Everything I Do) I Do It For You,” “Cuts Like a Knife” and the duet with former Spice Girl Melanie C,  “When You’re Gone.” He also made new music videos for the recent and classic tunes.

Of course, you don’t assemble a set list of classics without receiving recognition. Over the years, Adams has earned a Grammy, Junos, Oscar nominations and countless other honours for his music. Adding to those, on Sept. 24 Adams and Vallance were inducted into the Canadian Songwriters Hall of Fame — a pantheon of homegrown artists that includes Gordon Lightfoot, Joni Mitchell and Leonard Cohen. Adams is humble about the honour — “the winning bit was writing the songs” — and says that seeing Vallance receive recognition is “the best thing about it.

“I just owe so much to him as my early sort of teacher,” Adams notes. At 18, in 1978, he famously met Vallance at a Vancouver Long & McQuade store. “When we met, we hit it off; and the first day we got together, we wrote a song. So that’s how fast it happened.”

Their musical partnership still earns Adams fans today — including superstar admirers like Taylor Swift, who called “Summer of ’69” “one of my favourite songs ever written” before duetting with Adams on the tune at a Toronto concert in 2018.

“It’s really happened in the last few years: different artists have sort of tipped the hat, if you like,” Adams laughs. “It’s really sweet and it’s quite surprising, because I always thought of myself as the person that was being influenced by other people, not vice versa.”

When it comes to remaking his hits on the Classic albums, Adams says, “it was really sort of a recording exercise to see if it could be done — how close it could be made to the original.” He had found a box of instruments and gear that he used to record some of his hit tunes in the ’80s. “And I plugged it all in and it still worked and away we went. And a lot of the sounds were almost identical.”

Adams incorporates new elements into the songs, but his voice on the resulting tracks sounds, remarkably, as it did almost four decades earlier. “I am nostalgic to the music because it’s a big part of my life.”

If releasing four albums in a year isn’t enough, Adams is also on his aforementioned tour, crossing Canada before heading to Europe and then to the U.S. in the new year. “The thing that’s most impressive is just being able to look down at the set list of all these songs and be able to rattle ’em off one at a time,” he explains.

It’s a testament to Adams’ staying power and creative output, for which he still follows the guiding principle: “You have to sort of go with your gut … And you have to trust your intuition.”

That includes putting his name to products that resonate with his personal beliefs. Last year, Adams, an avowed vegan, partnered with the Vancouver company bettermoo(d) to help promote their dairy-free, plant-based oat milk. And recently, he teamed with the Toronto-based animal-free clothing brand Wuxly for the Wuxly x Bryan Adams BAD Collection, featuring a hoodie and two jackets, which launched on October 6.

“I’d been given one of their coats a while back and just thought, ‘Wow, these are great.’ And so we got talking together and … they offered me this opportunity,” Adams says.

Just in time for a November bonfire in Saskatoon.

Canadian Rocker Bryan Adams Is Back on the Road With His New Album, ‘So Happy It Hurts

“A Slice of Road Life With a Touch of Fantasy”: Bryan Adams on Shooting Cher, Iggy Pop and Others for the 2022 Pirelli Calendar