Armchair Traveller: 15 Books to Transport You to the Beach 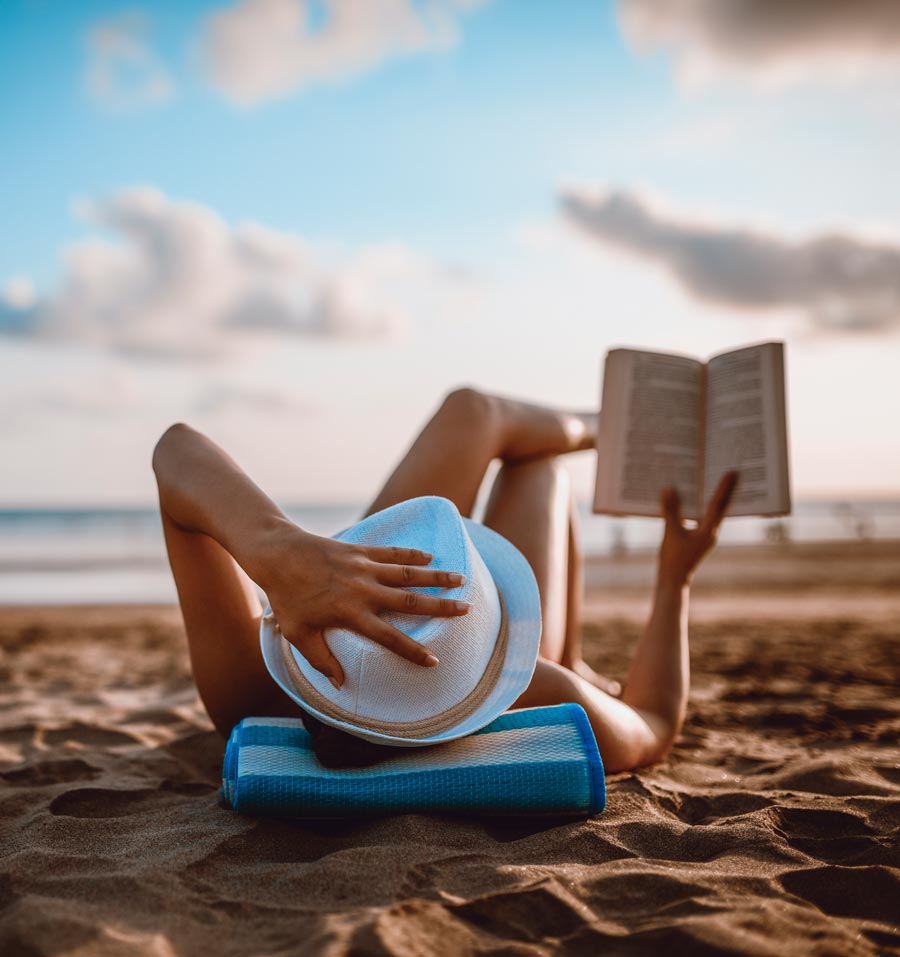 Dreaming of a sunshine getaway? We've got you covered with these books that will transport you to the world's most exotic beaches. Photo: Aleksandar Georgiev/Getty Images

Dreaming of sun and sea, but can’t make it there this winter? Pandemic travel restrictions and warnings have many of us in staycation mode, but wishing for warmer climes. Not to worry, we’ve got you covered with these books that will take you to some of the world’s most exotic and beautiful beaches. The beach: The eastern shores of Lake Michigan

The book: A jaded romance novelist who has lost her faith in love takes three-month beach getaway where she meets a literary writer in a rut of his own. To break through writer’s block, they decide to pen each other’s books. Result: a delightfully witty romp, and the perfect feel-good read for these times. The beach: The fictional tropical island of Saint X

The book: This haunting debut follows a college student who goes missing during a family vacation on an idyllic island paradise. The story is reminiscent of the real-life tragedy of Natalee Holloway, whose disappearance during a senior class trip to Aruba made headlines in 2005. Part literary thriller, part Caribbean travel brochure, Saint X is more intense than your typical beach read, and will keep you riveted. The beach: The south of France

The book: You know the old saying: if it seems too good to be true, it probably is. This Golden Age mystery follows a woman living in England in the 1940s, who escapes her unhappy marriage when a wealthy stranger leaves her a mysterious inheritance; and to find out what it is, she travels to the south of France where she discovers she’s inherited an enchanting villa overlooking the Mediterranean Sea. Her life, instantly transformed from gray and gloomy to glamorous, takes a deadly twist when challengers to her newly gained fortune begin to emerge.

The book: Beyond the beautiful beaches, Bahamas  in 1941 is a hotbed of spies, traitors, and probably the most infamous couple of the age, the Duke and Duchess of Windsor, who nearly brought the British monarchy to its knees five years before. A tale of the rise and fall of a Royal couple, stakes in the Caribbean paradise become deadly when an ugly, and even treasonous, secret is revealed beneath the glitter of Wallis and Edward’s marriage. The beach: Nantucket and Martha’s Vineyard

The book: It’s 1969, and times they are a-changing. In America, Ted Kennedy crashes a car on Chappaquiddick and Neil Armstrong and Buzz Aldrin became the first humans to land on the moon. And like their country, the Levin family of Nantucket undergoes its own dramatic upheaval during that historic and heated summer when everything changed. The book:  A breezy coming-of-age story with a throwback to late ’80s nostalgia. Set in the publishing world of New York and the beaches of Truro, a summer vacation community on Cape Cod, The Last Book Party tells the story of a young aspiring writer as she tries to find her voice among the island’s famous authors.

The beach: The Hamptons

The book: A stunning water-front home in the Hamptons becomes the scene of tragedy when a billionaire’s lover dies and he attempts to cover it up. Scandals, secrets and substance abuse among the ultra-wealthy, as well as the culture clash with the locals they employ, makes for entertaining lounge chair reading. The book: Just how well do you know your friends, or for that matter your own partner or children? This stunning and unputdownable psychological thriller is about a couples’ vacation that goes horribly wrong when two families travel to the seductive, ancient Sicilian town of Siracusa, set on the sun-drenched coast of the Ionian Sea. 9. A DROP IN THE OCEAN (She Writes Press) by Jenni Ogden

The book: At 49, Boston neuroscientist Anna Fergusson, finds herself at an undesired crossroad when the funding for her research lab dries up. Acting on a whim, she rents a small cottage on Australia’s Turtle Island, with a vague notion of writing a book. On the island, which is teeming with wildlife, seabirds and nesting Green turtles, she finds not only literary inspiration, but true love — and a chance to begin again. The book: It’s summer and the livin’ is anything but easy. This lively tale about secrets, irrational love, and sibling rivalry — along with a generous dose of family dysfunction — follows the lives of three generations of women who return to their family cottage on three acres of beautiful beachfront property in Maine. From the bestselling author of Commencement. The book: Four women who became fast friends at a southern university in the 1960’s plan a reunion at a beach house thirty years later in hopes to reclaim the magic of those early years, before a cruel betrayal sent them adrift. 12. THE PRINCE OF TIDES (Dial Press) by Pat Conroy

The book: The low country’s marshy and difficult to navigate waters is the perfect backdrop for the traumatic events, complicated relationships and tragic lives of the Wingo family. The book, an instant bestseller, hit the silver screen in 1991, starring Nick Nolte, Kate Nelligan and Barbra Streisand. 13. THE OLD MAN AND THE SEA (Scribner) by Ernest Hemingway

The setting: The Straits of Florida, Cuba

The book: The sea is very much a character in this short novel, the last major work of fiction by Hemingway published during his lifetime. Considered one of his most famous works and awarded the Pulitzer Prize for Fiction in 1954, the book tells the story of Santiago, an aging Cuban fisherman, who struggles with a giant marlin far off the coast of Cuba. The book: While the title refers to a confectionery traditionally sold at seaside resorts, the story follows a not-so-sweet group of gangsters in this murder thriller set in a British seaside town in the 1930s. 15. TO THE LIGHTHOUSE (Mariner) by Virginia Woolf

The beach: Isle of Skye, Scotland

The book: Selected as No. 15 on the Modern Library’s list of 100 best English-language novels of the 20th century, Woolf’s philosophical modernist classic is about the Ramsay family and their visits to an old beach house on the Isle of Sky.

Note: Zoomer editors have carefully curated our book coverage to ensure you find the perfect read. We may earn a commission on books you buy by clicking on the cover title.

Travel by the Book: 7 Novels Set Aboard a Cruise Ship