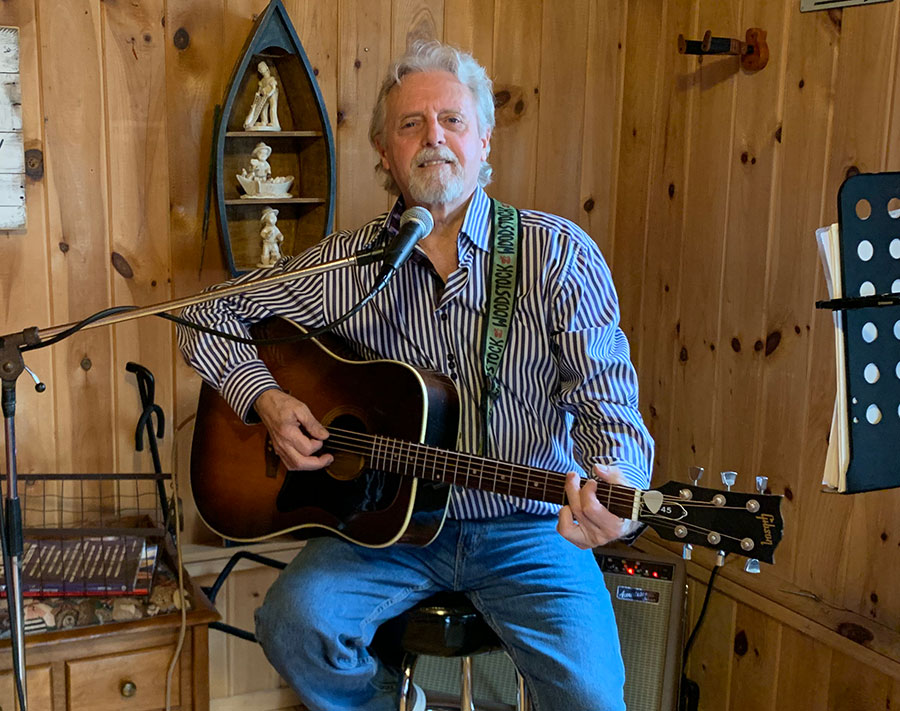 Phil Veinotte is one of over 200,000 members who have joined a Facebook group aimed at replicating the traditional Maritime kitchen party.

When most of us are still sleeping or sipping coffee in our pyjamas, Phil Veinotte is clad in a buttoned-up shirt, perched on a stool in front of a microphone with his guitar, ready to perform.

His audience: more than 200,000 members of an online Facebook community called the Ultimate Online Nova Scotia Kitchen Party, where performers of all skill levels share musical performances and connect with one another to stave off the anxiety of the COVID-19 outbreak.

“It’s helped me personally,” says the 65-year-old retiree from Lunenburg County, N.S., who has posted a video every day since discovering the group. “It gives you a sense that you’re still part of the world in a sense that you have connections out there.”

Heather Thomson, the creator of the group and one of its administrators, says the idea for the group came to her when she was thumbing through the endless scroll on her facebook account and stopped to take in a video of a friend performing a song from his living room.

“I was feeling overwhelmed and stressed with everything going on,” she said in a phone interview from her home in Pictou County just north of Halifax. “And I listened to it, and it just gave me this sense of calm.”

After scrolling a little further and finding a second friend performing from his kitchen, the idea was fully formed.

“I thought, ‘This is what I need,’” she recalls. “I need to flood my Facebook with music. I don’t want to see all of the negativity and all of that. I want to feel the music and the joy that comes from that.”

As the name suggests, she set out to recreate those traditional Maritime shindigs, where guests typically gather in the kitchen and, more often than not, an instrument makes an appearance.

Despite requests from members to limit membership to Nova Scotians, Thomson insists on keeping the group open to everyone, resulting in people joining from nearly 100 countries.

“In true Nova Scotia kitchen party fashion, our doors are open, and we invite everybody,” Thomson explains. “There are people all over the world connecting with complete strangers. You feel like you’re in the same room with them.”

Veinotte doesn’t take those connections for granted. From the time he puts up his daily performance at 7:30 a.m., he spends around six hours responding to each and every comment he receives — which often surpass 200.

“I think it really makes a difference for them,” he said of interacting with fellow group members. “I respond within minutes, and they’re right back to me, so I know they’re monitoring it and they’re looking to see that they’ve actually connected with somebody.”

His daughter, Alyson Dutchak, who lives in Calgary, has also benefited from the group. Working at Alberta’s Children Hospital, she watches her dad’s daily video post every morning in the parking lot before she heads into work.

After she was forced to cancel an upcoming trip home, Dutchak says seeing her dad’s performances have made their time apart a little easier.

His performances, from Gordon Lightfoot’s “Wreck of the Edmond Fitzgerald” to Neil Diamond’s “Sweet Caroline,” are all familiar to Dutchak.

“Every song he’s posted on there is one we knew from when we were kids,” she said, adding that it was a surprise to see him post online. “He usually just played for us around the campfire.”

She also finds comfort in seeing him make the most of a stressful situation.

“There’s been a lot of talk around fears for his age group, and it’s been a huge shift for them not to see their grandchildren,” Dutchak says. “So it’s been giving him something to do.”

“It’s an isolation killer for me,” Veinotte says. Despite seeking out a quiet life after retirement with his wife — turning what was once their cottage on the lake into their permanent home — the idea of isolation was still unsettling.

“The whole notion of the world being in shutdown, and [there being] a risk to safety by going out and being around people is frightening,” he says. “Especially for someone like myself who enjoys people and enjoys the fellowship of groups.”

For Veinotte, much of that enjoyment is linked to music. Before the COVID-19 crisis, he would attend community jam sessions at local venues four or five times a week with a group of fellow musicians he calls his “fam jam.”

With the sessions on hold, he’s also established an online connection with the group, sharing each of his daily videos to their own Facebook group as well.

“Primarily seniors go to these jams,” he explains. “Folks that have very little social things in their lives, and they rely on these little jam sessions. ”

Between the Ultimate Kitchen Party and the smaller local Facebook group, he has attracted quite the following and has even received some special requests.

“After all these days, people are telling me ‘We look forward to your post every day,’ and it starts their day off with a smile,” he says.

Still, he’s not letting all the accolades go to his head.

“I’m not a very talented musician,” he says. “It’s just other people seem to be enjoying my take on music.

“It’s certainly much more fulfilling for me personally than it is for anybody out there watching it.”

Good News: The Silver Lining in the COVID-19 Pandemic Should Ease Fear and Anxiety